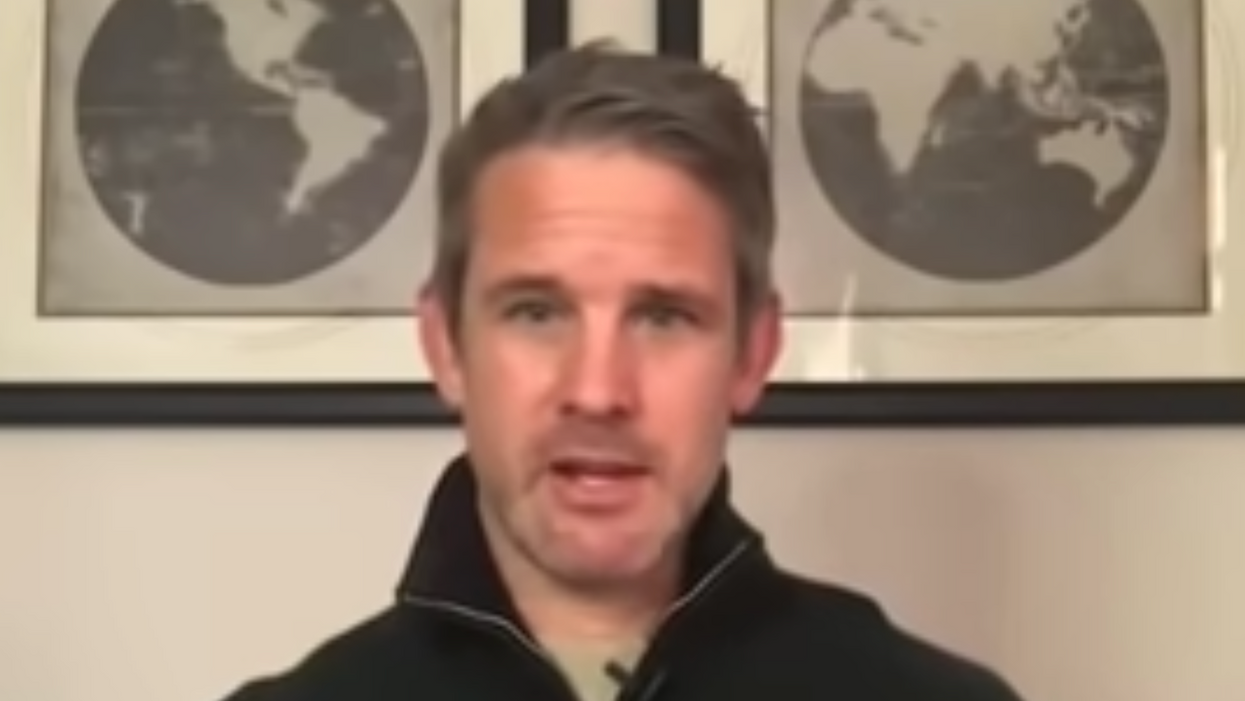 Rep. Adam Kinzinger of Illinois has been feuding with Alabama Rep. Mo Brooks and other fellow Republicans over their plans to contest 2020's Electoral College results when the U.S. Senate and the U.S. House of Representatives meet for a joint session of Congress on January 6. The conservative Illinois congressman has made it abundantly clear that he accepts Joe Biden as president-elect, and in a video posted on New Year's Eve, Kinzinger explained why he is refusing to go along with Republicans who won't publicly admit that President Donald Trump lost the election.

"The president doesn't want to admit defeat, and nobody would," the 42-year-old Kinzinger explains in his video. "But he's currently trying to discredit the election results through falsehoods and conspiracies. As someone trusted to lead, I have a choice. I can be quiet, and I can survive by taking the easy path. Or, I can speak up and lead without concern for the consequences. I choose to lead without fear."

Trump and many of his supporters, including Republicans in Congress, have continued making the baseless and totally debunked claim that he was the victim of widespread voter fraud in 2020's presidential election. But Kinzinger never bought into that conspiracy theory. And in his video, he leaves no doubt that he will support Biden's certification on January 6.

"When a conspiracy theory is repeated like this in an official setting, it makes it seem real to folks — and it's then sent as proof," Kinzinger warns. "And that's a serious problem that we need to address. As public servants, we have a responsibility to serve in good faith. Purporting falsehoods is dangerously irresponsible, and it's just plain wrong."

Kinzinger goes on to discuss the false claim, made by pro-Trump attorney Sidney Powell and others, that Dominion Voting Systems' technology not only helped Biden steal the election, but also, helped the late President Hugo Chávez steal elections in Venezuela. Dominion has responded that it's equipment has never even been used in Venezuela.

"First off, Dominion's servers are not housed in foreign countries," Kinzinger explains. "There was a story out there saying that in Michigan, Dominion was switching 6,000 votes from Donald Trump and giving them to Joe Biden. That's false. There was an error, but it was a human error — not a Dominion issue. And it was corrected."

The Illinois congressman adds that when Republicans in the House and the Senate refuse to honor Electoral College results, it's bad for democracy.

"Right now, members of Congress are planning to try to overthrow this election by using the debunked conspiracy theories," Kinzinger observes. "Let's be clear, they won't succeed — and they all know it. They will raise money on it, however. I've heard from so many members of Congress who know this isn't true, but they fear their next election. And a snowball of self-protection has grown rapidly."

Kinzinger adds, "We were sent to lead, regardless of our preferred outcome. This will start a terrible cycle where every election must be elected to — and eventually, we will lose our ability to self-govern. It really is that serious."