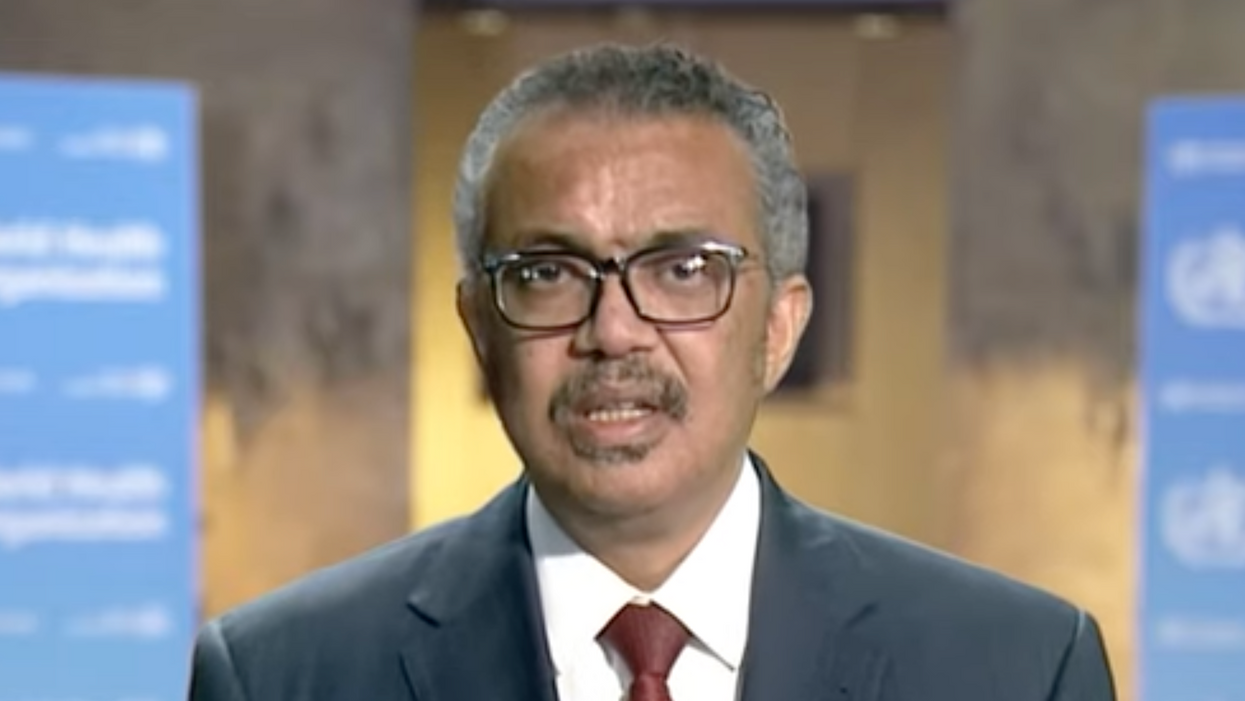 One year after the international community first recognized the Covid-19 crisis—which has grown into a deadly, devastating pandemic—the head of the World Health Organization on Wednesday reiterated demands for ensuring equitable access to coronavirus vaccination amid ongoing vaccine development, testing, and deployment.

As of Wednesday evening, according to the Johns Hopkins University global tracker, the world had recorded more than 82.5 million Covid-19 cases and over 1.8 million deaths. The United States continues to lead both tallies, and even before December is officially over, it has been nation's deadliest month on record during the pandemic.

"The Covid-19 pandemic has taken so many lives and caused massive disruption to families, societies, and economies all over the world," said Dr. Tedros Adhanom Ghebreyesus, the WHO director-general. "But it also triggered the fastest and most wide-reaching response to a global health emergency in human history."

"Vaccines, therapeutics, and diagnostics have been developed and rolled out, at record speed, thanks to collaborations including the Access to Covid-19 Tools Accelerator," he noted. "Equity is the essence of the ACT Accelerator, and its vaccine arm, COVAX, which has secured access to two billion doses of promising vaccine candidates."

"Vaccines offer great hope to turn the tide of the pandemic. But to protect the world, we must ensure that all people at risk everywhere—not just in countries who can afford vaccines—are immunized," the WHO chief emphasized. "To do this, COVAX needs just over four billion US dollars urgently to buy vaccines for low- and lower-middle income countries. This is the challenge we must rise to in the new year."

Tedros called for learning from the events of 2020, including the lesson that "governments must increase investment in public health, from funding access to Covid vaccines for all people, to making our systems better prepared to prevent and respond to the next, inevitable, pandemic."

He pointed out that "as it will take time to vaccinate everyone against Covid, we must keep adhering to tried and tested measures that keep each and all of us safe. This means maintaining physical distance, wearing face masks, practicing hand and respiratory hygiene, avoiding crowded indoor places, and meeting people outside."

The WHO leader also emphasized the importance of global solidarity:

Going into 2021, we have a simple, yet profound, choice to make: Do we ignore the lessons of 2020 and allow insular, partisan approaches, conspiracy theories, and attacks on science to prevail, resulting in unnecessary suffering to people's health and society at large?
Or do we walk the last miles of this crisis together, helping each other along the way, from sharing vaccines fairly, to offering accurate advice, compassion, and care to all who need, as one global family?
The choice is easy. There is light at the end of the tunnel, and we will get there by taking the path together.

Tedros' comments came as the U.K. government on Wednesday became the first to give emergency authorization to a coronavirus vaccine developed by AstraZeneca and the University of Oxford, "with the first doses being released today so that vaccinations may begin early in the New Year," according to the biopharmaceutical company.

Charles Riley reported for CNN Business that the AstraZeneca-Oxford vaccine "is cheaper and easier to distribute than alternatives, and is expected to play a crucial role in boosting the global economy next year," explaining that the company "has promised to supply hundreds of millions of doses to low- and middle-income countries, and to deliver the vaccine on a not-for-profit basis to those nations in perpetuity."

Moncef Slaoui, chief scientific adviser for U.S. President Donald Trump's widely criticized Operation Warp Speed, said the AstraZeneca-Oxford vaccine is in phase three trials in the United States but being manufactured ahead of the potential authorization. "If everything goes well, that read-out and emergency use authorization may be granted somewhere early in April," he said. "By that time, several tens of millions of doses of this vaccine will have been manufactured."

The U.S. government has already authorized and begun distributing the coronavirus vaccine developed by Moderna as well as one from Pfizer and BioNTech. Bloomberg reported that as of early Wednesday, more than 5.1 million doses of various vaccines have been administered across 22 countries. Nearly half, 2.32 million doses, were in the United States, followed by China, the U.K., Israel, Russia, Canada, Bahrain, Germany, and Mexico, though some figures haven't been updated in several days.

Throughout the pandemic, some world leaders, officials in poorer countries, and justice campaigners have demanded that rich governments and vaccine developers work to ensure universal access to coronavirus vaccination. Members of an alliance calling for a #PeoplesVaccine are warning that nine out of 10 people in low-income countries could miss out on vaccination against the virus next year despite the development and distribution of multiple vaccines, many funded by public money.

Given that there aren't yet enough doses of all tested coronavirus vaccines to protect everyone, and the vast majority of existing and planned doses has already been claimed by wealthy countries, poorer nations and public health campaigners are pushing for the suspension of intellectual property rights for vaccines during the pandemic to enable the development of generic versions of vaccines and Covid-19 treatments, which some wealthy nations and vaccine developers have fought against.