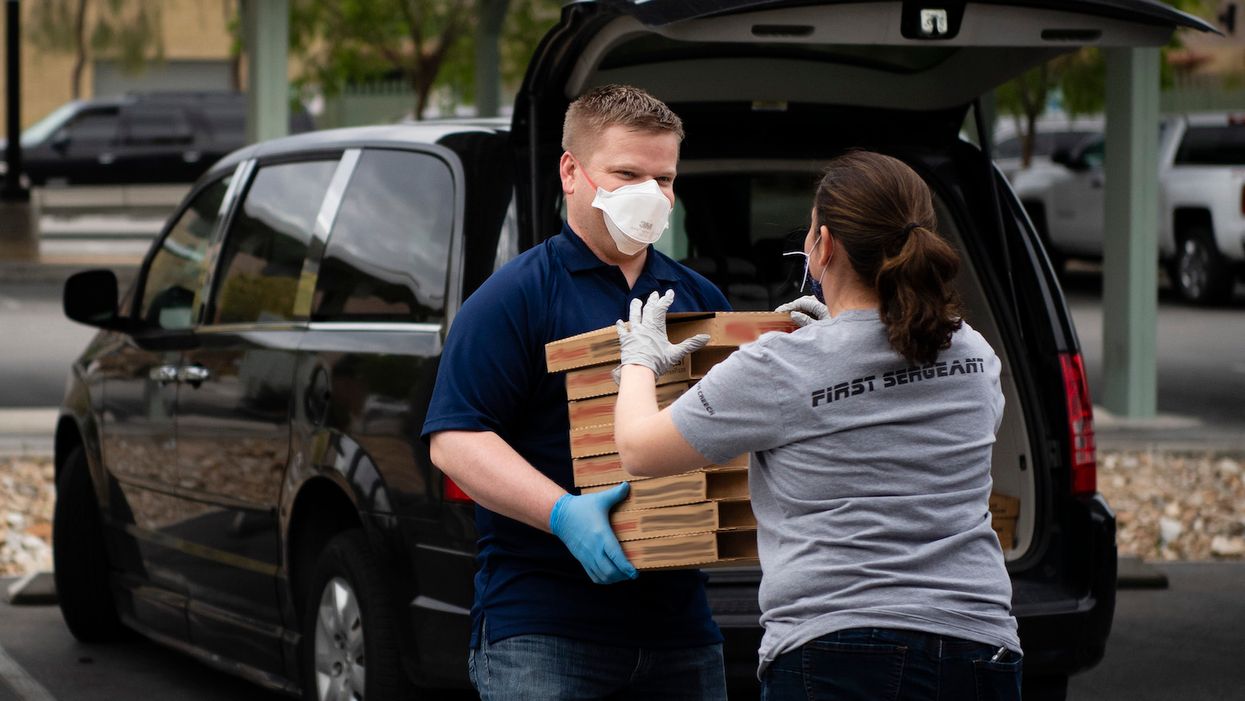 First sergeants from Creech Air Force Base deliver pizza to hand out to Creech families during a drive-thru dinner giveaway event in Las Vegas, Nevada, April 10, 2020. The event was executed in an effort to boost the morale of Airmen and families, who were asked to stay in their vehicles as first sergeants, and other volunteers, handed them pizza while maintaining minimal contact and practicing Centers for Disease Control preventative measures. (U.S. Air Force photo by Staff Sgt. Omari Bernard)
Jake Johnson
and
Common Dreams
December 10, 2020

Hours after the U.S. reported a staggering 3,000 coronavirus deaths in just 24 hours, the Department of Labor announced Thursday that an additional 1.3 million Americans filed jobless claims last week, further bolstering the case for a bold relief package and spotlighting the cruelty of the Republican leadership's continued opposition to boosting unemployment benefits.

According to the latest figures from the Bureau of Labor Statistics, nearly 20 million Americans are currently receiving jobless benefits just over two weeks before funding is set to expire for a pair of key emergency unemployment insurance (UI) programs—a lapse that would hurl millions of people off a "benefit cliff."

"The 1.3 million who applied for UI last week was an increase of 276,000 from the prior week, bringing initial claims back to their highest point since September," Heidi Shierholz, senior economist and director of policy at the Economic Policy Institute, wrote in a blog post Thursday. "Further, last week's increase was not just due to week-to-week volatility in the data. The four-week moving average of total initial claims is now at its highest point since October."

"In other words," Shierholz added, "layoffs appear to be rising, consistent with the resurgent virus."

Faced with worsening economic metrics and widespread suffering—evidenced by miles-long food lines, overwhelmed unemployment systems, and a looming "tsunami" of evictions—the Trump administration and Senate Majority Leader Mitch McConnell (R-Ky.) are hawking relief plans that would not increase weekly unemployment benefits at all.

Additionally, according to the Washington Post, the White House plan "does not appear to extend the number of weeks people are eligible to be on unemployment programs," an omission that would leave the millions of Americans who have already exhausted their benefits with no lifeline.

"The nation's health and economy are going backwards, not forwards," Beyer continued, "because Republicans and the leader of their party have spent months doing the very opposite of what is needed to contain the coronavirus and responsibly rebuild and recover from this recession."

In the place of a weekly UI boost, the White House has offered direct stimulus payments of $600 per adult and $600 per child—well short of the progressive call for $1,200 per adult and $500 per child on top of extra unemployment benefits. McConnell's plan would not provide any direct payments or aid to state and local governments, which economists say is desperately needed.

Speaking to reporters on Wednesday as relief talks appeared on the verge of collapsing once again, Treasury Secretary Steve Mnuchin—the administration's lead negotiator—insisted the White House's stimulus checks would be more beneficial than an increase in weekly unemployment payments.

But as the Post's Jeff Stein and Mike DeBonis noted, compared to the White House's call for one-time payments of $600 per person, "jobless Americans would receive at least an additional $4,800 for each unemployed worker" if weekly UI payments are increased by $300, as proposed by a bipartisan relief measure.

Jeremy Funk, spokesperson for government watchdog group Accountable.US, said in a statement Thursday that "with rising levels of food insecurity and a new wave of evictions in less than one month, the Trump administration should be working around the clock to get relief into Americans' pockets."

"Instead, Mnuchin and the White House think now is a good time to propose gutting jobless benefits and cutting stimulus checks in half—the last thing vulnerable Americans need in this recession," Funk added. "Congress and the Trump administration's priorities must be on containing the virus and getting relief into the hands of the millions of workers and thousands of small businesses that desperately need help."

Unlike the plans offered by McConnell and Trump, the bipartisan coronavirus relief proposal currently being fleshed out on Capitol Hill would extend pandemic unemployment programs, add 16 weeks of benefits, and provide a $300 boost to weekly UI payments.

But that proposal would not provide any direct stimulus payments, a popular form of relief that progressives are demanding as an essential component of any relief package, in addition to a weekly UI supplement.

In a statement Thursday, People's Action executive director George Goehl said it is "unconscionable that we have Covid relief proposals on the table that deny people direct cash assistance and offer corporations a get-out-of-jail-free card for the consequences of forcing employees to work in dangerous conditions."

"Mitch McConnell and Senate Republicans blocked relief bills for months as 284,000 people died and millions suffered under an economic crisis," said Goehl. "A bill that doesn't include cash assistance fails to deliver on the most simple and direct means of providing short-term relief."