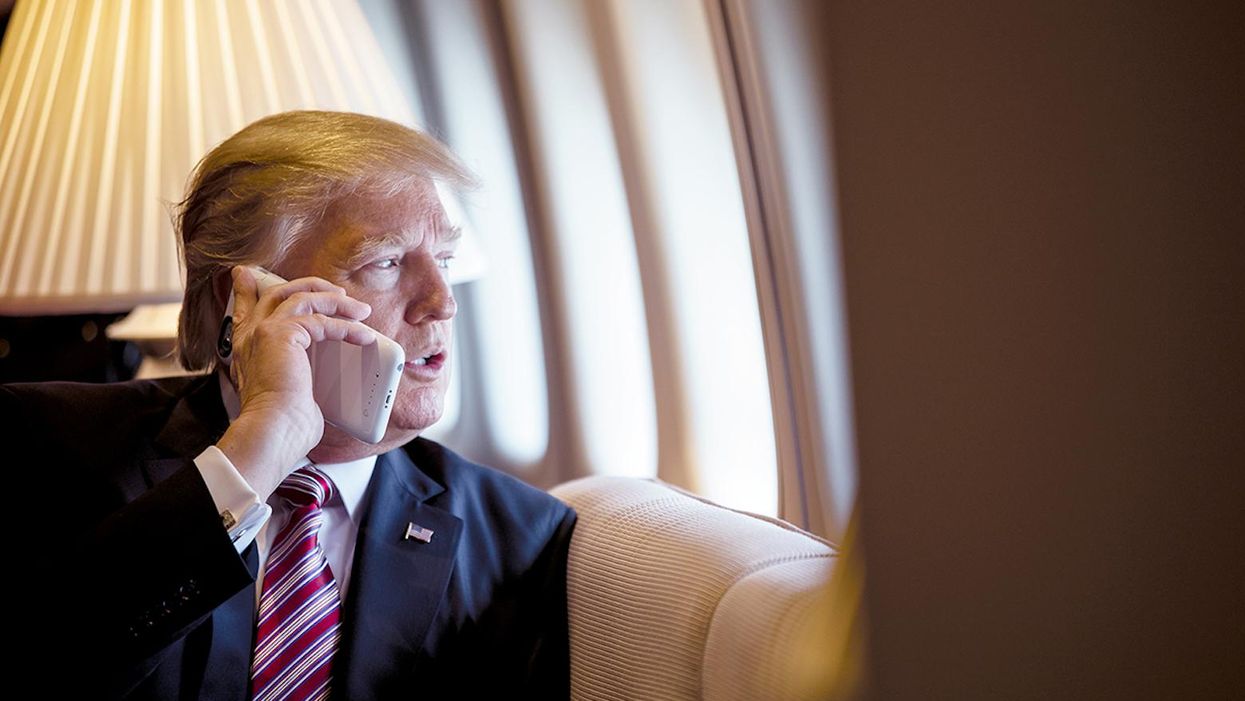 President Donald Trump talks on the phone aboard Air Force One during a flight to Philadelphia, Pennsylvania, to address a joint gathering of House and Senate Republicans, Thursday, January 26, 2017. This was the President's first trip aboard Air Force One. (Official White House Photo by Shealah Craighead)
Alex Henderson
December 17, 2020

The Trump White House and Twitter have both denied that President Donald Trump's Twitter account, @RealDonaldTrump, was hacked on October 16. But prosecutors in the Netherlands, according to Agence-France Presse, have confirmed that the hacking occurred — although the hacker, security specialist Victor Gevers, will not be prosecuted.

In the Netherlands, Gevers is a security researcher for the GDI Foundation and chairman for the Dutch Institute for Vulnerability Disclosure. And Dutch prosecutors, according to AFP, believe that Gevers was an "ethical hacker" who hacked @RealDonaldTrump as a cybersecurity test rather than to hurt the U.S. president.

The 44-year-old Gevers confessed to the hack immediately, and his confession was investigated by cybercrime specialists in Dutch law enforcement. That investigation, AFP reports, verified that Gevers was telling the truth.

In an official statement, the Dutch prosecution office, Openbaar Ministeri, said, "We believe the hacker has actually penetrated Trump's Twitter account, but has met the criteria that have been developed in case law to go free as an ethical hacker."

Although hacking is a criminal offense in the Netherlands, Openbaar Ministeri believes there are "special circumstances" in Gevers' case and that he did not act maliciously.

"Both the hacker and the American authorities have been informed of the outcome of the investigation," Openbaar Ministeri announced.

Gevers told Dutch media that he figured out the password for @RealDonaldTrump, which was "maga2020!" when he hacked it.

In an interview with the Dutch newspaper De Volkskrant, Gevers said that Trump was not using adequate security measures online — and according to Gevers, the U.S. Secret Service thanked the Netherlands resident for bringing the security breach to its attention.

"I expected to be blocked after four failed attempts, or at least would be asked to provide additional information," Gevers told De Volkskrant.

This wasn't the first time Gevers hacked Trump's Twitter account. In 2014, according to the Washington Post, Gevers hacked @RealDonaldTrump by guessing that Trump's password was "yourefired." That wasn't a difficult password to guess, as Trump was famous for saying, "You're fired" to contestants when he hosted the popular reality show, "The Apprentice."

Trump, who has no doubt changed his password since the October 16 hack, has 88.6 million followers on Twitter.