I finally talked to my sister -- who voted for Trump

I had to call her for other reasons. Our conversation started out okay, she said she was staying safe, wearing her mask, not going out unless it was absolutely necessary. I said that is great, i am glad she is staying safe because so many people think the virus is a hoax, they dont wear masks, etc, so far so good, then she said, "you do know that around 200,000 people die from the flu each year, right?" And then It all went to hell. I lost my temper. I am not proud of it. Here are the main things she had to say, as far as I can remember.

* China is behind the release of the virus, they are trying to take over the world.

* The mainstream news outlets cannot be trusted, they are biased against trump, and republicans.

* Facts presented in the mainstream media cannot be believed because the secret cabal is controlling everything. (This goes for science too)

* Nothing you read or see anywhere can be trusted. (except for her sources of news, whatever they are, she would not tell me where she is getting her information)

* There is a secret cabal running the world. (Which includes George Soros, and assorted socialists)

* Trump started space force because he is in contact with aliens, and is going to save the world.

Our father served for four years overseas in Japan. I asked her if she knew Trump had called service men and women, people who had died for this country, "suckers and losers." I reminded her that this includes OUR FATHER. She had nothing to say about that. She just said that she "knows a lot of things." "She gets information from many sources." Sure, okay. At this point i told her that if we were going to have a relationship moving forward, we would be unable to talk about politics or any of this stuff, ever again. To tell you the truth, I do not know if this is even possible for me to do, i feel so overwhelmed. Anyway, in the heat of the moment, this was the only thing I could think of, to try and salvage our relationship. She said she wasn't sure if she could do that and started going off on another tangent. I interrupted her and said that I had had enough, that I was unable to talk about this stuff anymore. She said she didn't understand why I was so angry, we just have different opinions about politics! This really blows my mind, she was a forever Democrat like me and our parents. She voted for Hillary Clinton, is a lesbian, is on disability, and is in remission from stage four ovarian cancer, for fuck's sake! I am really struggling with this. This is way too much for me to process right now. She was acting like I was out of bounds and had no reason at all to be upset. She was really puzzled, she could not grasp my despair and made it seem like I was the one who was being unreasonable. So in the end, we have no kind of resolution, it is just left hanging in the air. 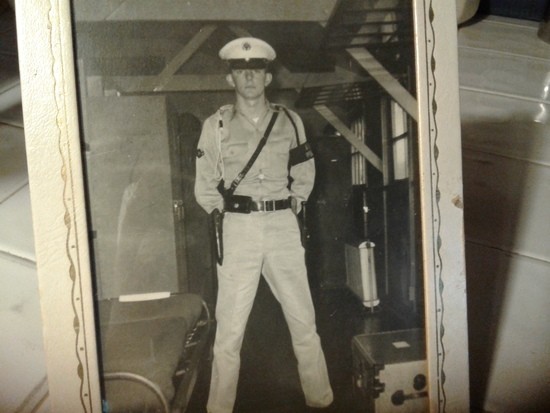 This is a picture of our father, in Japan.

A huge part of my anger stems from Trump's vile denigration of our troops. I asked my sister repeatedly about our father, and what trump said about men and women who served and died. She never had an answer. The house she is living in right now was made possible because of the GI bill. My parents bought our first house with that help, which in turn was sold to buy our home in Napa, and then in Fallon, when they retired. What was left over from my parent's estate after my father died, enabled my sister to buy her own home. I don't begrudge her the home she now has because of this, i just want her to understand that she voted for and is supporting an evil man, who cares for no one, including her, and men like our father. She is 57 years old, I think I am done for the time being. For once, I am going to concentrate on myself, and what I need.