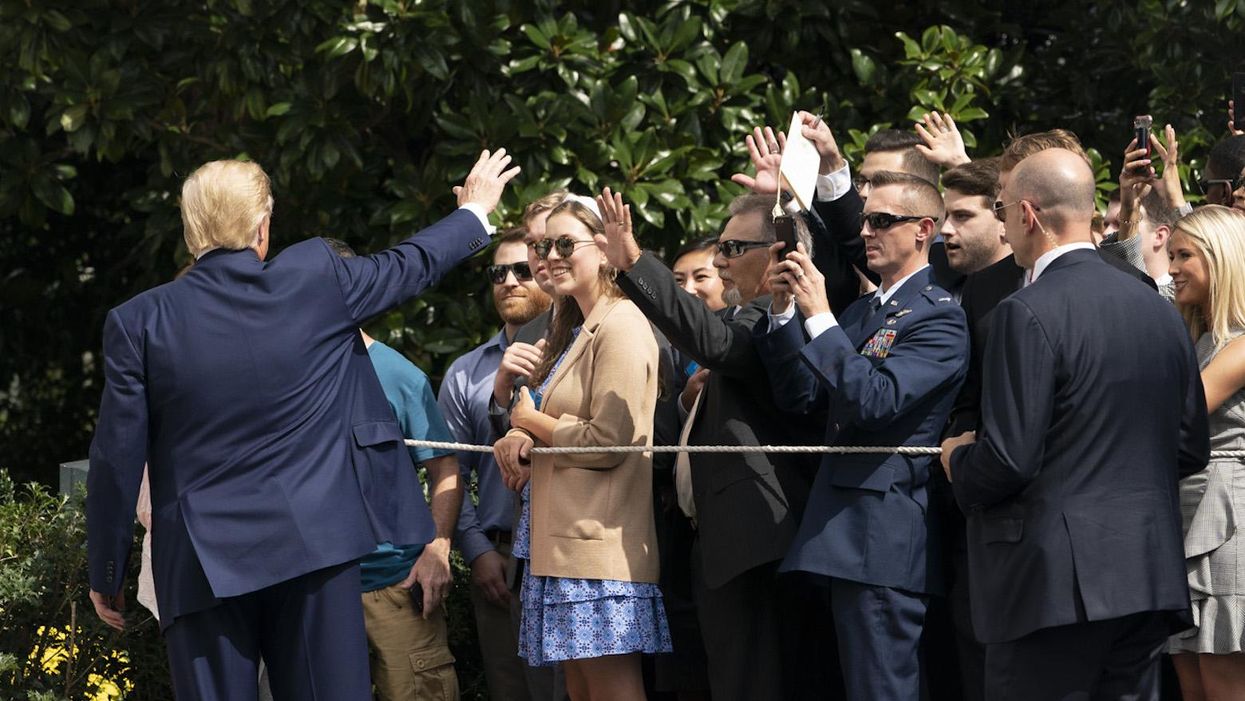 Do Republican voters really believe that Joe Biden stole the election from Donald Trump? Do they sincerely see Trump's efforts to overturn the election as the legitimate actions of a wronged man trying to defend democracy? When they declare "stop the steal," are they truly unaware that they are the ones trying to steal this election from the rightful winners?

Or are millions of Americans arguing in bad faith, merely claiming to believe Trump is the true winner? Is this all just a disingenuous song-and-dance, meant to put a morally justifiable gloss on what is actually widespread support among Trump voters for a coup? The answer to this question of "delusion or bad faith?" matters quite a bit, as Trump continues to prosecute his futile campaign to steal the 2020 election.

Polls show that a hefty majority of Republican voters — 68%, according to Reuters/Ipsos — say they believe the 2020 election was "rigged" in Biden's favor. Since the election, more than $200 million has flowed into Trump's coffers from Republican donors responding to emails promising to "stop the steal." Are these donors innocent lambs who sincerely believe that Trump is a good man done wrong? Or are they people who are actively seeking to finance a coup, employing the flimsiest of excuses?

Well, as the author of a book called "Troll Nation," it's clear where I stand: By and large, Republican voters who claim that Biden stole the election are arguing from bad faith, not delusion.

This distinction is important because it shows that the intentions of Republican voters (and too many of their elected leaders) are sinister, and need to be taken seriously as an overt assault on democracy. Understanding modern politics means understanding one crucial reality about the current landscape: Conservatives don't hold beliefs, they only have rationalizations.

Many of their long-standing beliefs don't hold up to modern moral standards or rational scrutiny. Rather than give up those beliefs, however, Republicans have developed a series of disingenuous gambits, conspiracy theories and trolling tactics to derail conversations, sow confusion and otherwise distract those who would challenge their indefensible ideology.

Of course, it's morally indefensible to come right out and say you care more about keeping your gas guzzler than protecting the planet. So, instead, conservatives claim to be "skeptical" of climate science, wasting their interlocutor's time by forcing them to prove, over and over and over and over again, that climate change is real. Similarly, open contempt for women's rights is hard to argue, so instead, conservatives will claim concern for "fetal life" to justify support for forced childbirth — even though none of their other policy preferences point to concern about the wellbeing of children, much less fetuses.

Poll numbers showing that Republican voters "believe" that Trump lost the election are more of the same.

Conservatives know better than to openly argue that Democratic votes shouldn't be counted. So instead they concoct this elaborate conspiracy theory, painting themselves as the victims of voter fraud in order to justify an illegal effort to steal the election. The current situation is similar to the last time there was a widespread conspiracy theory aimed at delegitimizing a duly elected Democratic president. During Barack Obama's presidency, polling showed that large numbers of Republicans, often a majority, expressed "skepticism" that Obama was a natural-born citizen and therefore legally eligible to be president. As is the case now, Trump was a ringleader in pushing this "birther" conspiracy theory, helping to mainstream claims that Obama's presidency was illegitimate.

But did Republican voters really believe that Obama was born in Kenya? Or was it just a cover story for their real but unspeakable racist opposition to a Black man being president?

A 2014 study by Stanford researchers suggests strongly that for most birthers the conspiracy theory was bad faith and not a sincere error. The researchers compared different polls and found that how the poll questions were worded made a huge difference in conservative adherence to birtherism. When pollsters reminded respondents that only "natural-born" citizens can become president, nearly 60% of Republican voters readily denied Obama's citizenship. But when polls framed it as a test of knowledge of facts, by asking respondents where Obama was born, only 31% of conservatives espoused birther beliefs. These findings suggest that most conservatives weren't confused about where Obama was born. The conspiracy theory was just a way to express racist beliefs about the inherent illegitimacy of Black leaders by asking "questions" about Obama's birth certificate.

Trump knows how to tickle this racist impulse in his followers and, unsurprisingly, his claims that Biden "stole" the election follow the same formula. Trump and his main henchman, Rudy Giuliani, have specifically accused Philadelphia, Detroit, Milwaukee and Atlanta — all cities where Black Americans are either a majority or a plurality of residents — of having "dumps" of illegal ballots.

The appeal of this conspiracy theory to racists isn't subtle. It's a way to deny the legitimacy of Black voters without coming right out and saying it. This isn't just a conspiracy theory about Trump's fragile ego. It speaks directly to long-standing right-wing fury at minority voting rights. Historian Jeffrey Herf notes another historical precedent at play, comparing Trump's conspiracy theory to the ones that rose up in Germany between the first and second world wars in a recent Washington Post op-ed:

[Trump's] efforts to deny the reality of defeat and threaten democracy recall the most famous comparable episode in modern European history — the claims by the German military and diplomatic establishment that Germany had not been defeated militarily in World War I. Instead, they argued, Germany had been "stabbed in the back" by liberals, socialists, communists and Jews who somehow snatched defeat from the jaws of victory.

In reality, Herf points out, the war was "lost because of the superiority of the Allied military" and German hubris leading to bad battlefield decisions. But claiming to believe otherwise gave conservative Germans a chance to save face and, perhaps more important, an excuse to bash other Germans — mostly leftists and Jews — who they didn't want to acknowledge as equal citizens. Was it bad faith or misapprehension? As I note in a recent newsletter, Jean-Paul Sartre felt strongly it was the former at the time, and argued the "bad faith" case in his famous 1946 essay on anti-Semitism.

So why does it matter?

As Greg Sargent writes at the Washington Post, "What Republican voters think, or say they think, about who really won matters less than the fact that, as a consequence, they actively want their elected representatives to subvert our democracy and keep Trump in power illegitimately."

Unfortunately, the belief that these folks are sincere in their claims that the election was "stolen" puts a glow of innocence on their actions. This leads many observers underestimate the seriousness of a situation where a large percentage of Americans are actively supporting a coup. It also focuses attention away from what needs to be done to fight back. The "delusion" model of understanding Republican behavior suggests that education is the solution. That was thoroughly disproven in the Obama years, when even the release of his long-form birth certificate did little to discourage GOP voters from denying his legitimacy.

Instead, it's important to see those who support Trump's coup for who they are: People who have been radicalized, through racism hateful propaganda and a sense of perpetual grievance, against democracy. They aren't going to change their minds because of new facts, because the underlying belief — which is that they deserve to be in power, no matter what — is the problem here. It's a rising American authoritarianism, and we underestimate it at our peril.