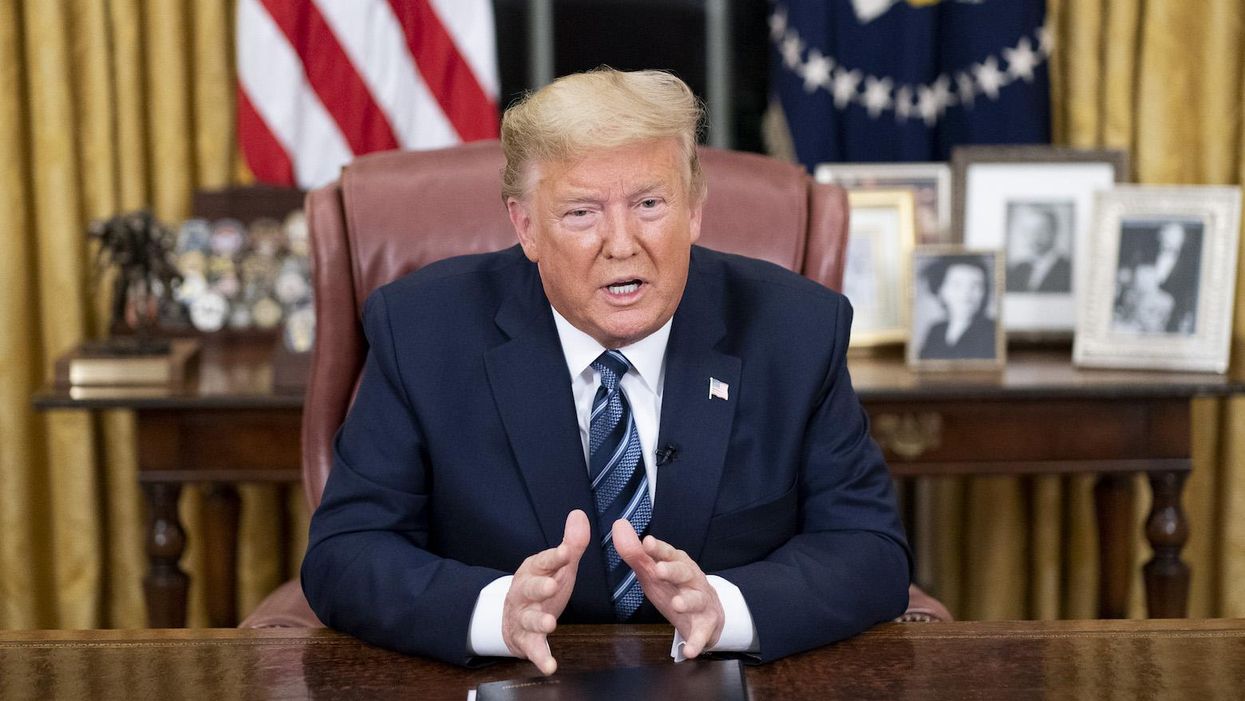 This weekend, President Donald Trump is scheduled to speak at a GOP rally in Georgia, where he will be campaigning for two incumbent U.S. Senate candidates: Sen. Kelly Loeffler and Sen. David Perdue. But according to the Washington Post, some Georgia Republicans are worried that Trump might say or do something embarrassing that hurts the candidates. And a meeting in which Trump reportedly spoke favorably about the far-right and delusional QAnon movement is a prime example of why they are worried.

Post reporters Josh Dawsey, Amy Gardner and Cleve R. Wootson, Jr. explain that "over the summer," Trump met with Senate Majority Leader Mitch McConnell, Sen. Todd C. Young of Indiana and other Republicans to discuss Georgia. Trump brought up Marjorie Taylor Greene, a far-right QAnon conspiracy theorist who had won a GOP congressional primary in Georgia (Greene went on to win the general election on November 3). According to Post sources, Trump mispronounced QAnon as "Q-an-uhn" and praised them as people who "basically believe in good government."

The Post reporters note, "The room was silent again before Mark Meadows, the White House chief of staff, leaned forward to say he had never heard it described that way. Trump had similarly praised QAnon, which the FBI has identified as a potential domestic terrorist threat, during an August news conference."

Adherents of the QAnon conspiracy fiction believe that the U.S. government has been infiltrated by an international cabal of pedophiles, child sex traffickers, Satanists and cannibals and that Trump was put in the White House to combat the cabal. The "Q" in QAnon refers to an anonymous figure named "Q," who QAnon supporters believe is offering updates on Trump's battle.

The outcome of the runoff Senate races in Georgia in January is vitally important to the GOP, as it will determine whether or not Republicans maintain their majority in the U.S. Senate. And according to Dawsey, Gardner and Wootson, GOP activists are hoping that Trump's visit to Georgia will help Loeffler and Perdue rather than hurt them.

"President Trump's planned trip to Georgia on Saturday to campaign for two Senate candidates embroiled in tight runoff races has put some Republicans on edge that he could do more harm than good by repeating false claims about the voting system, attacking GOP officials and further inflaming a simmering civil war within the state party," the Post journalists note. "That war showed no signs of abating this week, with competing GOP factions growing increasingly angry and distrustful of one another."

Trump, who lost Georgia to President-elect Joe Biden, has been claiming, without evidence, that he really won the state and that his victory was stolen from him because of widespread voter fraud. Far-right pro-Trump attorneys and conspiracy theorists Sidney Powell and Lin Wood have filed lawsuits challenging the election results in Georgia, where Secretary of State Brad Raffensperger, a conservative Republican, has been receiving death threats after saying that the election was perfectly secure in his state and acknowledging Biden as president-elect.

Trump has denounced Raffensperger as an "enemy of the people," and Loeffler and Perdue are among the Georgia Republicans who have called for his resignation.

Powell and Wood, claiming that the election was "rigged" in Georgia, have urged voters to boycott the Senate runoffs — and Republicans who want to see Loeffler and Perdue win fear that their recommendation could discourage turnout among Republican voters and give Democrats control of the Senate.

'It's devastating': Unvaccinated woman thought she could 'escape' Covid – now she'll 'never be the same'