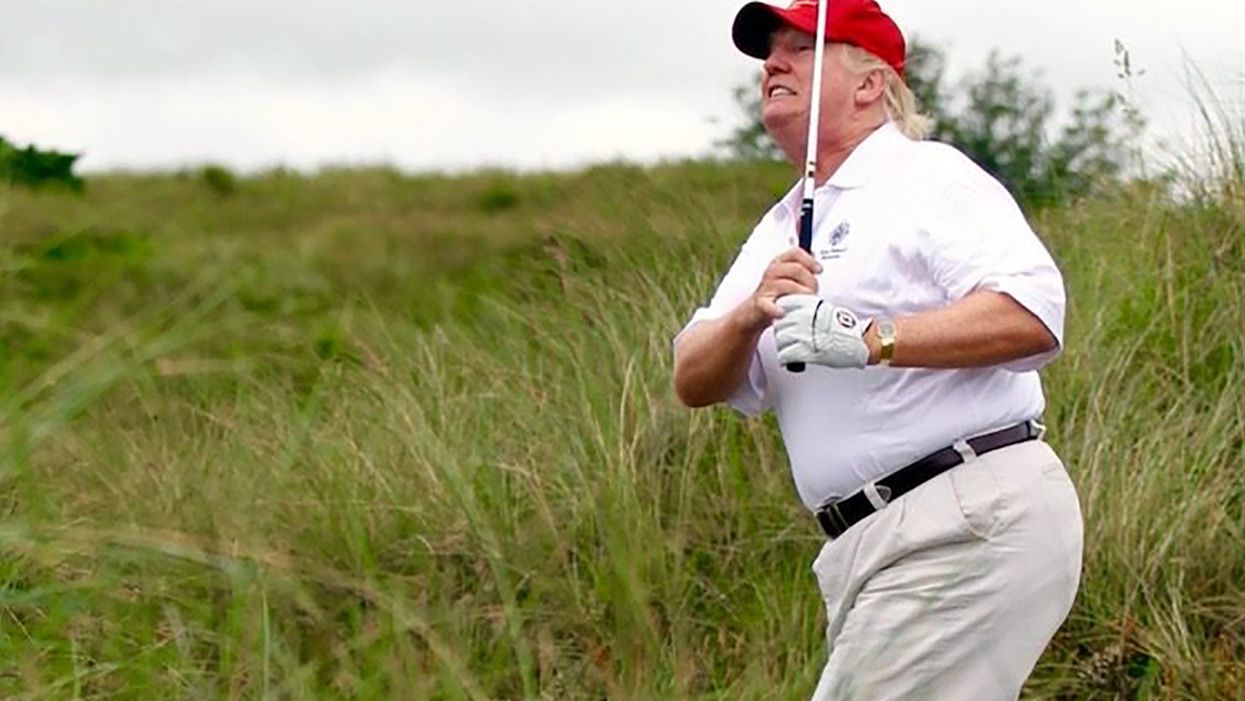 After threatening to blow up a $900 billion coronavirus relief package over several eleventh-hour demands—one of which is being blocked by his own party—President Donald Trump spent Christmas Eve golfing in Florida and tweeting election lies as millions of desperate Americans were left worrying that they will soon be deprived of their few remaining economic lifelines.

If Trump doesn't sign the newly passed relief measure, an estimated 14 million jobless Americans will lose unemployment aid on Saturday, a federal eviction moratorium will expire at year's end, and billions of dollars in nutrition aid and rental assistance will be left in the balance as fresh economic metrics make clear that the recession is nowhere near over.

"Congress must pass $2,000 in direct payments and Trump must sign the Covid-relief bill. If not, tens of millions of Americans will lose their unemployment benefits, go hungry, and face eviction."
—Sen. Bernie Sanders

"Are we going to have to suffer longer? You just pray somebody comes to their senses," Samara Crockett, a 43-year-old single mom who was laid off in September, told the Washington Post. "I'm in survival mode. Do I get gas or food? What do I do? That's what my days are like."

Emergency unemployment benefits were already set to lapse temporarily due to months of obstruction by the Republican-controlled Senate, but Trump's last-minute objections to the legislation—which he did not raise during negotiations over the measure—imperil the bill's extension of and $300 weekly increase in jobless aid.

Should Trump wait until Sunday or later to sign the relief legislation, the delay "will effectively cut the extension of the expiring unemployment programs to 10 weeks from 11," Ben Casselman of the New York Times noted.

"Here's why: The bill says that the benefits won't be available for 'any week of unemployment commencing before the date of the enactment of this Act,'" Casselman wrote. "So if Trump doesn't sign the bill until next week, people can't get benefits until the following week. But the end date of benefits doesn't change: March 14 (with a phase-out lasting until April 5). So workers would effectively lose a week of benefits. Note this applies to the $300 supplement as well."

Sen. Ron Wyden (D-Ore.), who fought unsuccessfully for larger weekly unemployment payments in the new bill, told the Times that "Trump's temper tantrum is threatening to cost millions of jobless workers a week's worth of income."

"The ability of millions of Americans to pay rent and buy groceries hangs in the balance, and Donald Trump spent the day golfing," said Wyden. "It's shameful."

Too often we talk about what happens in Congress & the WH like a horserace or TV drama. But millions of Americans… https://t.co/WuwR1eypWW
— Heather Long (@Heather Long)1608832403.0

On Thursday, congressional leaders signed the sprawling 5,600-page package—which includes both the coronavirus relief measure and a $1.4 trillion omnibus government funding bill—and the White House sent it to Florida for the president's possible approval. Trump has reportedly not decided whether he will sign the legislation, which will die on January 3 with the end of the current Congress. The government is set to shut down on December 29.

In Washington, D.C., meanwhile, House Republicans on Thursday blocked a Democratic attempt to pass the $2,000 direct payments that Trump claimed to want in a video address released earlier this week, a day after Congress approved the coronavirus relief package. Trump has not publicly criticized members of his party for blocking the $2,000 payments, which progressives have been advocating for months.

"This holiday season, families are being forced to make incredibly difficult decisions, such as whether they should keep their lights on or buy groceries," Rep. Rashida Tlaib (D-Mich.) said in a statement Thursday. "It's time for Trump to stop bluffing and get the members of his party in line so that the government can provide this long overdue relief to people across the country during this time of great need."

House Democrats are planning to hold a floor vote Monday on stand-alone legislation that would replace the $600 direct payments currently in the relief bill with $2,000 checks. While the measure is expected to pass the House, it is unclear whether Senate Majority Leader Mitch McConnell (R-Ky.) would even allow a vote on the increased payments.

"Congress must pass $2,000 in direct payments and Trump must sign the Covid-relief bill," Sen. Bernie Sanders (I-Vt.) tweeted Thursday. "If not, tens of millions of Americans will lose their unemployment benefits, go hungry, and face eviction. This would be a level of governmental cruelty not seen in our lifetimes."