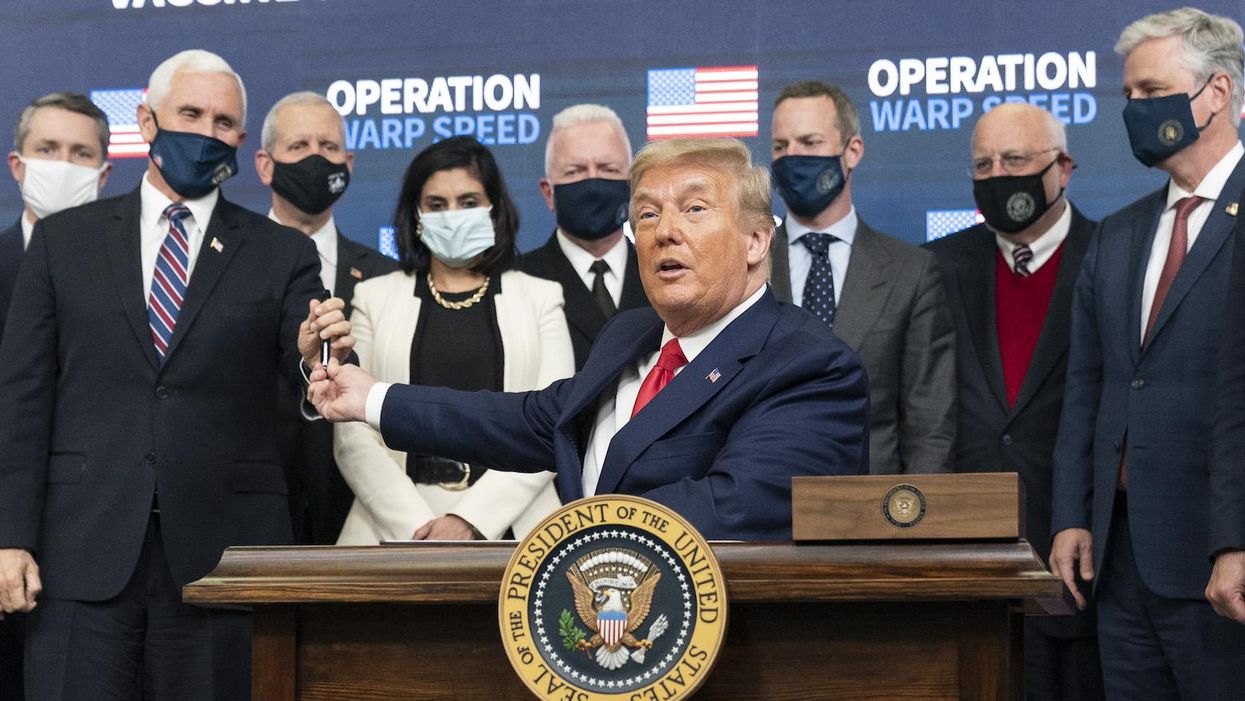 When Texas attorney general Ken Paxton first filed a lawsuit with the Supreme Court demanding that all the votes of Georgia, Michigan, Pennsylvania and Wisconsin — 10.4 million votes in total — be thrown out completely, the general media response was to call it a stunt. Paxton is under investigation for an alleged bribery scheme, and observers speculated that, by filing this ridiculous lawsuit, he is trawling for a presidential pardon from Donald Trump, whose recent pardon of his crony Michael Flynn has instilled hope among other GOP lowlifes that they can bribe Trump to do the same for them.

Yet even though this suit is widely dismissed as a joke, a slew of other elected Republicans joined the lawsuit on Thursday, lending support to Paxton's argument that red states should be able to overturn the results of an election that didn't end well for Republicans. So far, 17 Republican state attorneys general and 106 Republicans in the House of Representatives — more than half the GOP caucus — have signed onto amicus briefs supporting Paxton's absurd demands that all the votes of the residents of these four states be destroyed. Six states have asked to join Paxton's lawsuit directly. On Monday, only a couple of House Republicans — mainly Rep. Jim Jordan of Ohio and Rep. Mo Brooks of Alabama — were willing to openly support Trump's efforts to steal the election. Now it's the majority of the House GOP caucus.

In doing so, these Republicans have outed themselves as opponents of democracy. There is no other way to read this, and no wiggle room to pretend otherwise. This isn't about "voter fraud" or any of the other bad-faith gambits that Trump and his supporters are throwing out as distractions. It's about throwing out entire state elections because they favored a Democrat.

And while Republicans in the Senate have not formally signed onto this assault on the concept of democracy, many have done so informally.

Sens. Kelly Loeffler and David Perdue, Georgia's two Republican incumbents who are competing in runoff elections on Jan. 5, have also publicly sided with Paxton. In other words, these two senators are literally asking Georgians to vote for them, while simultaneously demanding that those same voters watch their most recently cast ballots get thrown in the trash.

As confusing as this may appear, it's ultimately about the Republican belief that elections should be democratic in name only, and the only real choice available to voters should be to vote Republican. If the voters are foolish enough choose otherwise, their right to vote should be stripped away.

Paxton's claim is that the voting pools of these states are irrevocably tainted by "fraud." Yet he doesn't even bother to pretend there's any evidence of any actual fraud, much less any evidence of fraud on a scale that could conceivably change the election results. Indeed, the legal brief filed by Paxton admits that the fraud he's supposing is "undetectable." To get around this problem, Paxton literally argues that the burden of proof is not on those making accusations of fraud, but on the accused — the state governments of Georgia, Pennsylvania, Michigan and Wisconsin — to prove that they did not commit fraud.

"The constitutional issue is not whether voters committed fraud but whether state officials violated the law by systematically loosening the measures for ballot integrity so that fraud becomes undetectable," Paxton writes in his suit.

Trump loves to whine about "witch hunts," but this lawsuit is actually the real deal. It's making a broad-based, evidence-free accusation of fraud and refusing to prove it, instead insisting that the accused prove their innocence.

Of course, the states in question have already done that, time and again. With the nation watching, these states have audited their elections, performed recounts and defended their voter integrity processes successfully in court. But it's in the nature of witch hunts that the accused can never offer enough proof of their innocence. The accuser will remain unpersuaded.

Instead of evidence of fraud, Paxton's lawsuit implicitly argues that fraud should be assumed in an election — that is, in any election won by a Democrat. Using numbers that appear directly pulled from their asses, Paxton and company are arguing it was "improbable" that Biden could have won those states, which should be reason enough to assume fraud — and fraud on such a grand scale that there's no clear way for states to disprove the accusation.

As anyone who has been following the rhetoric spewed by Trump, his lawyer Rudy Giuliani and their minions and supporters can tell you, this is all operating from the overtly racist proposition that Black voters are inherently illegitimate. Time and again, Trump and Giuliani have focused their ire on the way election results tipped blue late in the vote-counting process, when Atlanta, Milwaukee, Philadelphia and Detroit — all cities with large Black populations — were finally counted.

Those were the vote "dumps" that Trump keeps ranting about. There's no mystery: In reality, those were large batches of votes that were counted late because they came from the biggest population centers in the state. It's entirely normal for big cities to finish counting votes later than small towns and suburban districts do. More people equals more votes equals more time. But Trump knows this language about "dumps" will resonate with his racist base, because the votes in question come from racially diverse cities.

Paxton's lawsuit folds in this racist logic by pointing out that votes counted towards the end of the process leaned more towards Biden than those counted earlier.

As Amber Phillips of the Washington Post notes, "Paxton is literally arguing that the Supreme Court overturn an election because states counted their votes."

It only makes sense if you assume, say, that the entire state of Michigan's votes are inherently tainted because Detroit's voters were included in the total. There is no non-racist way to assume that.

It's tempting to write off this entire situation as another Trump-flavored clown show. The fact that Sen. Ted Cruz of Texas, who never turns down an opportunity to make a fool of himself, has offered to argue the case in front of the Supreme Court is just further proof. (Free drinks to the justice who asks Cruz if Trump was right to accuse his father of murdering JFK.) It remains unlikely that the Supreme Court will even take up this insultingly dumb case, let alone rule in Trump's favor.

Still, the reality is that this cannot and should not be laughed off. As Pennsylvania Attorney General Josh Shapiro has written, this whole exercise is a "seditious abuse of the judicial process."

Sedition is a serious charge, but it's the right word. Most House Republicans and 17 state attorneys general are standing against the right of Americans to choose their own leaders. As elected officials, they are using the power granted to them by the people to declare that the people should not have such power. Even if they lose this case, this time around, the fact that so many traitors hold elected office in America is a major crisis all by itself.