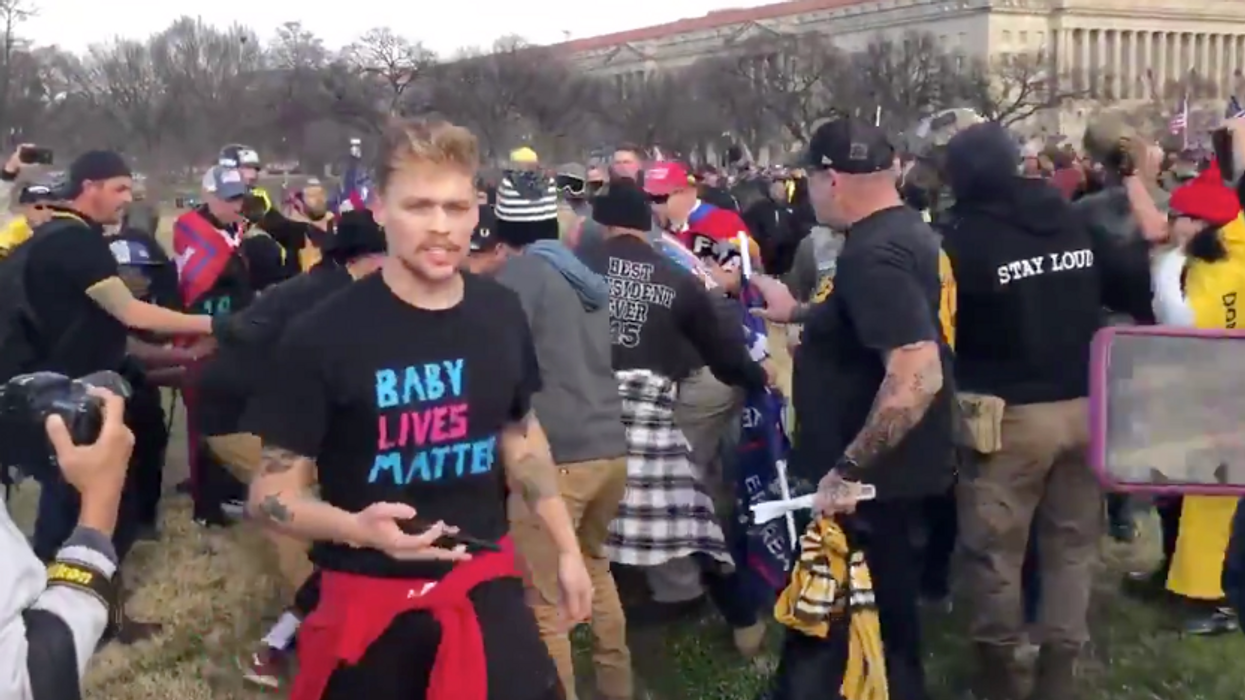 While the arrival of vaccine doses is finally bringing some hopeful news about the pandemic, the state of U.S. democracy continues to be at an historic low point fueled by the complicity of the Republican Party.

The past week has included a rash of threats against public servants trying to fulfill their duties and uphold their oaths of office. Nowhere was that more evident on Monday than in Michigan where the Capitol building was shut down to everyone but the 16 electors and others essential to certifying the state's Electoral College vote after credible threats of violence emerged. Each elector was provided with a police escort, but the atmosphere was so toxic, one elector ultimately decided to wear a bullet-proof vest to faithfully cast her vote for the state's rightful winner, Joe Biden.

The situation in Michigan followed on a week in which a so-called "enemies" list of state and federal officials who weren't sufficiently loyal to Donald Trump surfaced on the internet, according to the Washington Post. The list included the officials' home addresses along with photos of them covered by red targets and hashtags such as #remembertheirfaces and #NoQuarterForTraitors.

That sentiment bled into a weekend of protests turned violent from Washington State to Washington D.C., with four people stabbed and another shot in Olympia while a series of altercations broke out in D.C.

And it's not just public officials who are being targeted. The Georgia GOP election official who warned earlier this month that someone would wind up getting killed if Republicans didn't speak up outlined instances in which random citizens are getting caught in the crossfire.

"We have people stalking outside of our elections offices in Cobb County," said Gabriel Sterling last Thursday. "We've had a warehouse manager, he was simply taking trash out to the dumpster, and he had somebody follow him with a camera telling him he's going to prison."

Hate crimes spiked across the country following Trump's 2017 defense of white supremacists in Charlottesville as "very fine people." But Brian Levin, director of the Center for the Study of Hate and Extremism at California State University at San Bernardino, told the Post threats targeting government officials increased last year and were then exacerbated by the onset of coronavirus restrictions.

"The direction of the threats and intimidation against state and local officials took an eerie turn in the last couple of years and accelerated during the pandemic because aggrieved people are interacting with their government at the local level — in public health and elections," Levin said. "And those officials are the very ones labeled as legitimate targets for aggressions on cable news, social media and particularly by the president."

Following the spate of violent threats, the question becomes who will even want to serve in these positions anymore?

"There is an ugliness and cruelty in our national rhetoric that is reaching a fevered pitch here at home, and that should worry us all," said Diana Lachiondo, a local Idaho health official who was forced to flee a meeting last week about pandemic restrictions when menacing protesters showed up at her home. Lachiondo, who recently lost reelection, added, "I'm out. ... I've got a light at the end of the tunnel here. But who is going to want to run in the future? Do you need to live in a gated community to feel like you're safe? That is my concern going forward . . . what does this mean for our democracy?"

One of her colleagues, physician Ted Epperly, agreed the problem isn't going away anytime soon. "I think it'll take a lot of healing, quite frankly, to get us back to working together as a society," he told the Post. "I'm sure people will write about this for years to come," he added. "What happened? What happened here in this country? Who are we as people?"