Trump is playing his biggest supporters for suckers 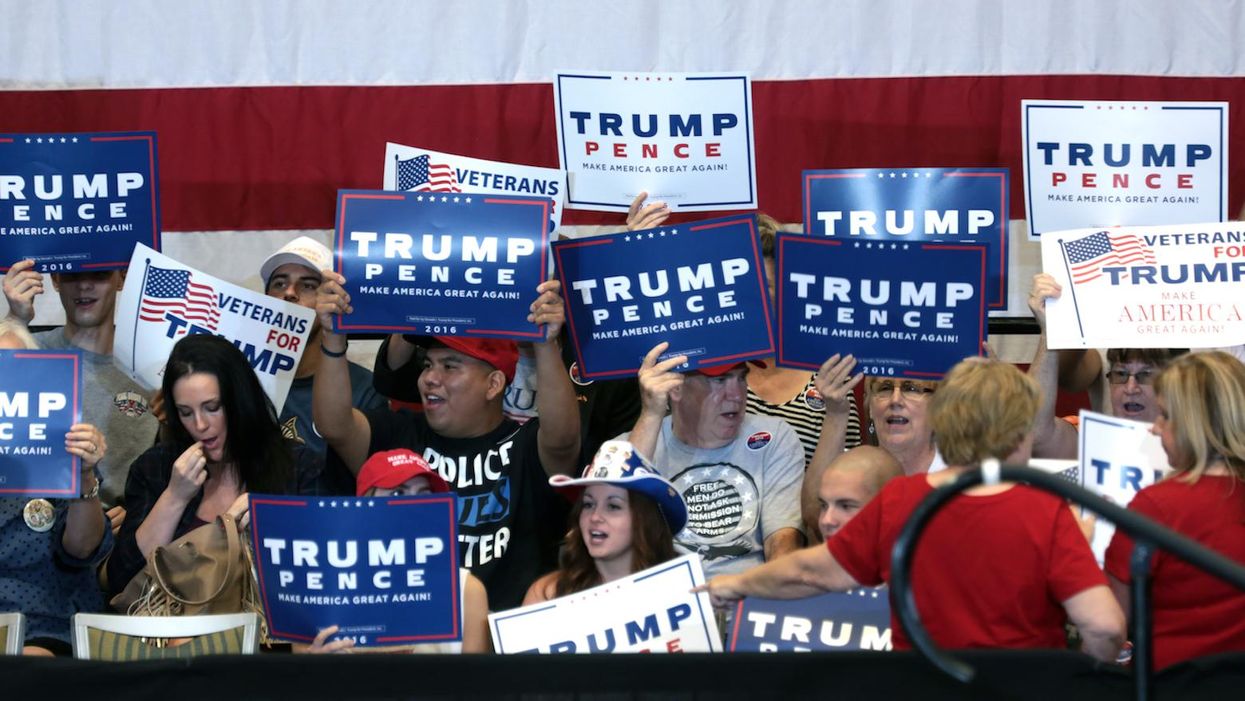 It's pretty damn obvious what's going on with Donald Trump and the election, and it's probably not an attempted coup. At least, that's not necessarily Trump's primary intention with his laughably unserious procession of 50-some failed legal challenges to the outcome of the 2020 presidential election.

Trump and his Republican enablers lost five cases on Friday alone, with more in Michigan and Georgia over the weekend. Meanwhile, his perpetually shvitzing lead attorney, Rudy Giuliani, tested positive for COVID after appearing in court on multiple occasions without a mask. And yet Trump and his gullible Red Hats keep reacting like Lloyd Christmas in "Dumb & Dumber." Faced with one-in-a-gazillion odds of actually winning a case, their response continues to be, "So you're telling us there's a chance!"

These suckers happen to be Trump's target customers, especially now.

Sure, Trump wants to be president for another four years. In fact, he'd probably be happy to serve in the post for the rest of his miserable life. Consequently, if there were to be an evidentiary breakthrough, which I suppose is always possible, he'd absolutely bask in the results and start planning his inaugural address.

I mean, there's a legal strategy at play here, but it's as primitive as the velociraptors in "Jurassic Park" testing the paddock fences for weaknesses. If they happen to find one, they'll absolutely exploit it, taking the opening as far as they can. In the worm-infested minds of Trump and his followers, any such opening could lead them to the Supreme Court, where Amy Coney Barrett is waiting to help.

There's no path, other than catching an extremely lucky break — a Lloyd Christmas one-in-a-gazillion fluke. The election ended the day the networks called it for Joe Biden and Kamala Harris. The president-elect's margin of victory is too formidable, and considering that even Trump's personal fixer at the Department of Justice, Bill Barr, announced that his people haven't found any evidence of widespread fraud, there's no other way for Trump. He can't win. Vote certifications continue on schedule, and it's virtually certain the Electoral College will cast its ceremonial ballots on schedule on Dec. 14, all but carving Trump's loss into stone.

Despite the nonexistent odds of victory, Trump is still, for all intents and purposes, attempting to overturn the election in one of the most staggeringly obscene and unpatriotic temper tantrums in presidential history. Some are calling it an attempted coup d'état against the true winner of the election, and I agree. But it's always been more of a performative coup. It's a circus sideshow for the shrieking satisfaction of Trump's tear-stained disciples, who simply can't understand how the most destructively incompetent president in American history lost his re-election campaign.

It turns out that the performative coup, including the bogus "whistleblowers" and all of Trump's various "lookits" ("Lookit Philadelphia! Lookit Dominion! Lookit Detroit!"), is only half of our transactional president's latest transaction. He's selling his Red Hats a stack of lies and nonsensical conspiracy theories about the election disguised as hope. In return, these badly deluded suckers are handing over their checking accounts to Trump's Save America PAC in the midst of a crushing recession.

Since Election Day, around $207 million has been raised by Save America PAC as well as both the Trump Victory and Trump Make America Great Again committees.

According to numerous news sources, however, hardly any of that sum is being spent on "stopping the steal."

As Salon's Igor Derysh reported last week, fundraising emails from the Trump campaign "claim that the money is for the 'Official Election Defense Fund,' [but] no such account exists. ... The fine print on the frenzied messages says the first $5,000 or first 75% of every donation greater than $5,000 goes to Save America, a new political action committee formed by the president in mid-November. The other 25% goes to the Republican National Committee." I wonder how many Red Hat suckers have given money to the PAC thinking it'd be spent on Trump's legal shenanigans. I'd wager most of them.

Brendan Fischer of the Campaign Legal Center, told CBS News that the PAC donations can be used by Trump "to keep former campaign staff on the payroll, to fund Trump's travel and expenses when he is campaigning for other candidates, and to help finance rallies and events (as long as the rallies and events are pitched as supporting other candidates or political issues rather than as Trump 2024 events)." As we've observed, Trump's rallies for other candidates always turn out to be about him and his roster of grievances. So, obviously, Trump will fudge the campaign finance reporting to minimize time spent ranting about himself.

All told, Trump's Save America PAC is, like most PACs, nothing more than a slush fund, located in the middle of a campaign-finance gray area. Candidates often use super-PAC money to finance lavish vacations and other personal expenses. Given that the Trump Foundation was shut down because the Trumps were self-dealing — using donations for personal items, including a painting of Trump — it's safe to assume the Trumps will dip into the PAC account to pay for … whatever the hell they want.

According to recent polling, more than half of all Republicans believe Trump really won the election despite the math and despite vindication of the math by myriad state officials along with some Trump-appointed judges. Seventy-four million voters chose to cast ballots for an ungainly monster whose incompetence and irresponsibility led to the latest unforgivable spike in COVID cases, while other nations like Australia are celebrating the near-total defeat of the pandemic. (On Sunday, there were nine new cases in all of Australia. On the same day in the United States, there were 173,457 new cases.) A ridiculously large percentage of those voters falsely believe Trump won, and they always will.

It's important to emphasize that we're talking about chronological adults who believe the screechings of the world's most notorious con man, while also believing that literally everyone else in the country is lying to them. Think about that. It's like a cancer patient who's diagnosed by the world's most esteemed oncologists, but instead accepts the word of a Reddit troll while accusing the experts of being the real crooks.

Trump wants nothing more than to separate his fanboys from their money, and exclusively so. "Stopping the steal" is merely a sales ploy. He might as well be a fake Nigerian prince bamboozling his fans with an obvious phishing scam. And they're walking right into it. These are desperately confused and easily-deceived adults whose TV messiah once tried to sell raw beef in Sharper Image mall stores. Trump's selling them a phony-baloney dream of a second term — a dream he has no possibility or intention of fulfilling. In exchange, they're giving him hundreds of millions of dollars that'll be used for everything but that dream.

Granted, we shouldn't get complacent until Joe Biden is administered the oath of office on Jan. 20, but we can at least rest assured that Trump's coup has no chance of success. His fanboys, meanwhile, will keep shoveling cash into the gaping maw of a known scam artist. Ultimately, I'm fine with that.