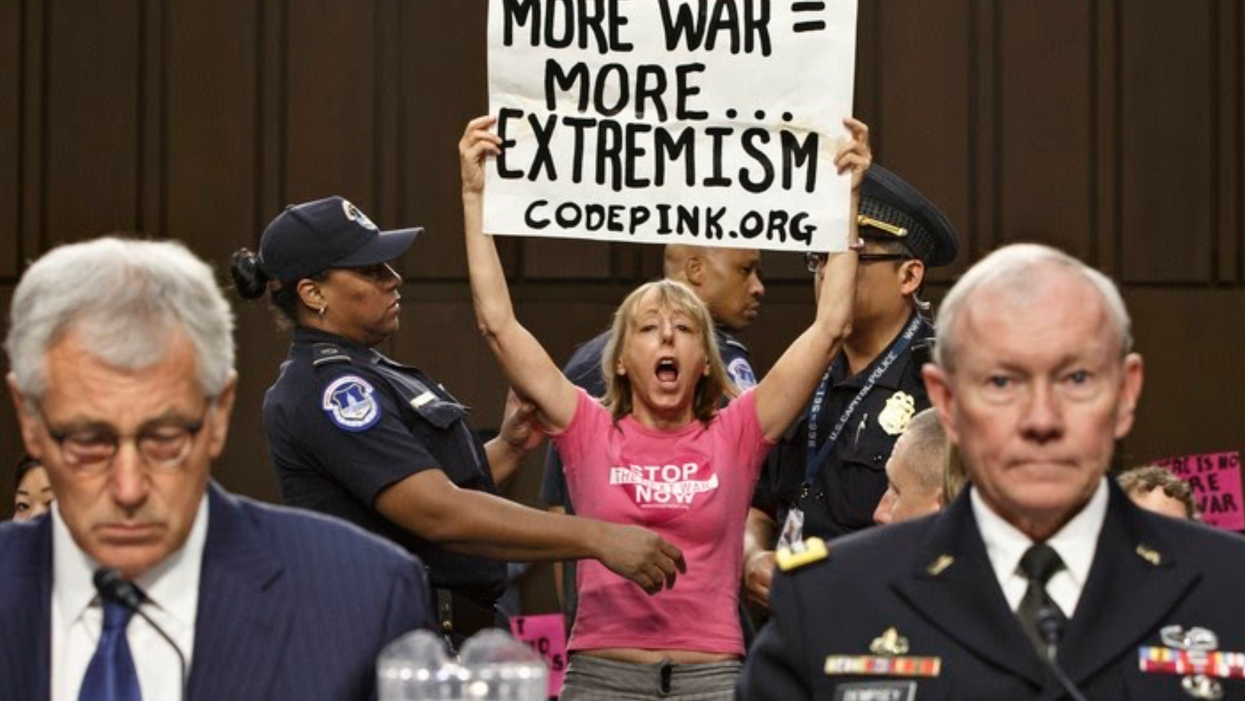 Joe Biden will take command of the White House at a time when the American public is more concerned about battling coronavirus than fighting overseas wars. But America's wars rage on regardless, and the militarized counterterrorism policy Biden has supported in the past—based on airstrikes, special operations and the use of proxy forces—is precisely what keeps these conflicts raging.

In Afghanistan, Biden opposed Obama's 2009 troop surge, and after the surge failed, Obama reverted to the policy that Biden favored to begin with, which became the hallmark of their war policy in other countries as well. In insider circles, this was referred to as "counterterrorism," as opposed to "counterinsurgency."

In Afghanistan, that meant abandoning the large-scale deployment of U.S. forces, and relying instead on air strikes, drone strikes and special operations "kill or capture" raids, while recruiting and training Afghan forces to do nearly all the ground fighting and holding of territory.

In the 2011 Libya intervention, the NATO-Arab monarchist coalition embedded hundreds of Qatari special operations forces and Western mercenaries with the Libyan rebels to call in NATO airstrikes and train local militias, including Islamist groups with links to Al Qaeda. The forces they unleashed are still fighting over the spoils nine years later.

While Joe Biden now takes credit for opposing the disastrous intervention in Libya, at the time he was quick to hail its deceptive short-term success and Colonel Gaddafi's gruesome assassination. "NATO got it right," Biden said in a speech at Plymouth State College in October 2011 on the very day President Obama announced Gaddafi's death. "In this case, America spent $2 billion and didn't lose a single life. This is more the prescription for how to deal with the world as we go forward than it has in the past."

While Biden has since washed his hands of the debacle in Libya, that operation was in fact emblematic of the doctrine of covert and proxy war backed by airstrikes that he supported, and which he has yet to disavow. Biden still says he supports "counterterrorism" operations, but he was elected president without ever publicly answering a direct question about his support for the massive use of airstrikes and drone strikes that are an integral part of that doctrine.

In the campaign against Islamic State in Iraq and Syria, U.S.-led forces dropped over 118,000 bombs and missiles, reducing major cities like Mosul and Raqqa to rubble and killing tens of thousands of civilians. When Biden said America "didn't lose a single life" in Libya, he clearly meant "American life." If "life" simply means life, the war in Libya obviously cost countless lives, and made a mockery of a UN Security Council resolution that approved the use of military force only to protect civilians.

As Rob Hewson, the editor of the arms trade journal Jane's Air-Launched Weapons, told the AP as the U.S. unleashed its "Shock and Awe" bombardment on Iraq in 2003, "In a war that's being fought for the benefit of the Iraqi people, you can't afford to kill any of them. But you can't drop bombs and not kill people. There's a real dichotomy in all of this." The same obviously applies to people in Libya, Afghanistan, Syria, Yemen, Palestine and wherever American bombs have been falling for 20 years.

As Obama and Trump both tried to pivot from the failed "global war on terrorism" to what the Trump administration has branded "great power competition," or a reversion to the Cold War, the war on terror has stubbornly refused to exit on cue. Al Qaeda and Islamic State have been driven from places the U.S. has bombed or invaded, but keep reappearing in new countries and regions. Islamic State now occupies a swath of northern Mozambique, and has also taken root in Afghanistan. Other Al Qaeda affiliates are active across Africa, from Somalia and Kenya in East Africa to eleven countries in West Africa.

After nearly 20 years of "war on terror," there is now a large body of research into what drives people to join Islamist armed groups fighting local government forces or Western invaders. While American politicians still wring their hands over what twisted motives can possibly account for such incomprehensible behavior, it turns out that it's really not that complicated. Most fighters are not motivated by Islamist ideology as much as by the desire to protect themselves, their families or their communities from militarized "counterterrorism" forces, as documented in this report by the Center for Civilians in Conflict.

Another study, titled The Journey to Extremism in Africa: Drivers, Incentives and the Tipping Point for Recruitment, found that the tipping point or "final straw" that drives over 70% of fighters to join armed groups is the killing or detention of a family member by "counterterrorism" or "security" forces. The study exposes the U.S. brand of militarized counterterrorism as a self-fulfilling policy that fuels an intractable cycle of violence by generating and replenishing an ever-expanding pool of "terrorists" as it destroys families, communities and countries.

For example, the U.S. formed the Trans-Sahara Counterterrorism Partnership with 11 West African countries in 2005 and has so far sunk a billion dollars into it. In a recent report from Burkina Faso, Nick Turse cited U.S. government reports that confirm how 15 years of U.S.-led "counterterrorism" have only fueled an explosion of terrorism across West Africa.

The Pentagon's Africa Center for Strategic Studies reports that the 1,000 violent incidents involving militant Islamist groups in Burkina Faso, Mali and Niger in the past year amount to a seven-fold increase since 2017, while the confirmed minimum number of people killed has increased from 1,538 in 2017 to 4,404 in 2020.

Heni Nsaibia, a senior researcher at ACLED (Armed Conflict Location Event Data), told Turse that, "Focusing on Western concepts of counterterrorism and embracing a strictly military model has been a major mistake. Ignoring drivers of militancy, such as poverty and lack of social mobility, and failing to alleviate the conditions that foster insurgencies, like widespread human rights abuses by security forces, have caused irreparable harm."

Indeed, even the New York Times has confirmed that "counterterrorism" forces in Burkina Faso are killing as many civilians as the "terrorists" they are supposed to be fighting. A 2019 U.S. State Department Country Report on Burkina Faso documented allegations of "hundreds of extrajudicial killings of civilians as part of its counterterrorism strategy," mainly killing members of the Fulani ethnic group.

Souaibou Diallo, the president of a regional association of Muslim scholars, told Turse that these abuses are the main factor driving the Fulani to join militant groups. "Eighty percent of those who join terrorist groups told us that it isn't because they support jihadism, it is because their father or mother or brother was killed by the armed forces," said Diallo. "So many people have been killed—assassinated—but there has been no justice."

Since the inception of the Global War on Terror, both sides have used the violence of their enemies to justify their own violence, fueling a seemingly endless spiral of chaos spreading from country to country and region to region across the world.

But the U.S. roots of all this violence and chaos run even deeper than this. Both Al Qaeda and Islamic State evolved from groups originally recruited, trained, armed and supported by the CIA to overthrow foreign governments: Al Qaeda in Afghanistan in the 1980s, and the Nusra Front and Islamic State in Syria since 2011.

If the Biden administration really wants to stop fueling chaos and terrorism in the world, it must radically transform the CIA, whose role in destabilizing countries, supporting terrorism, spreading chaos and creating false pretexts for war and hostility has been well documented since the 1970s by Colonel Fletcher Prouty, William Blum, Gareth Porter and others.

The United States will never have an objective, depoliticized national intelligence system, or therefore a reality-based, coherent foreign policy, until it exorcises this ghost in the machine. Biden has chosen Avril Haines, who crafted the secret quasi-legal basis for Obama's drone program and protected CIA torturers, to be his Director of National Intelligence. Is Haines up to the job of transforming these agencies of violence and chaos into a legitimate, working intelligence system? That seems unlikely, and yet it is vital.

The new Biden administration needs to take a truly fresh look at the whole range of destructive policies the United States has pursued around the world for decades, and the insidious role the CIA has played in so many of them.

We hope Biden will finally renounce hare-brained, militarized policies that destroy societies and ruin people's lives for the sake of unattainable geopolitical ambitions, and that he will instead invest in humanitarian and economic aid that really helps people to live more peaceful and prosperous lives.

We also hope that Biden will reverse Trump's pivot back to the Cold War and prevent the diversion of more of our country's resources to a futile and dangerous arms race with China and Russia.

We have real problems to deal with in this century - existential problems that can only be solved by genuine international cooperation. We can no longer afford to sacrifice our future on the altar of the Global War on Terror, a New Cold War, Pax Americana or other imperialist fantasies.