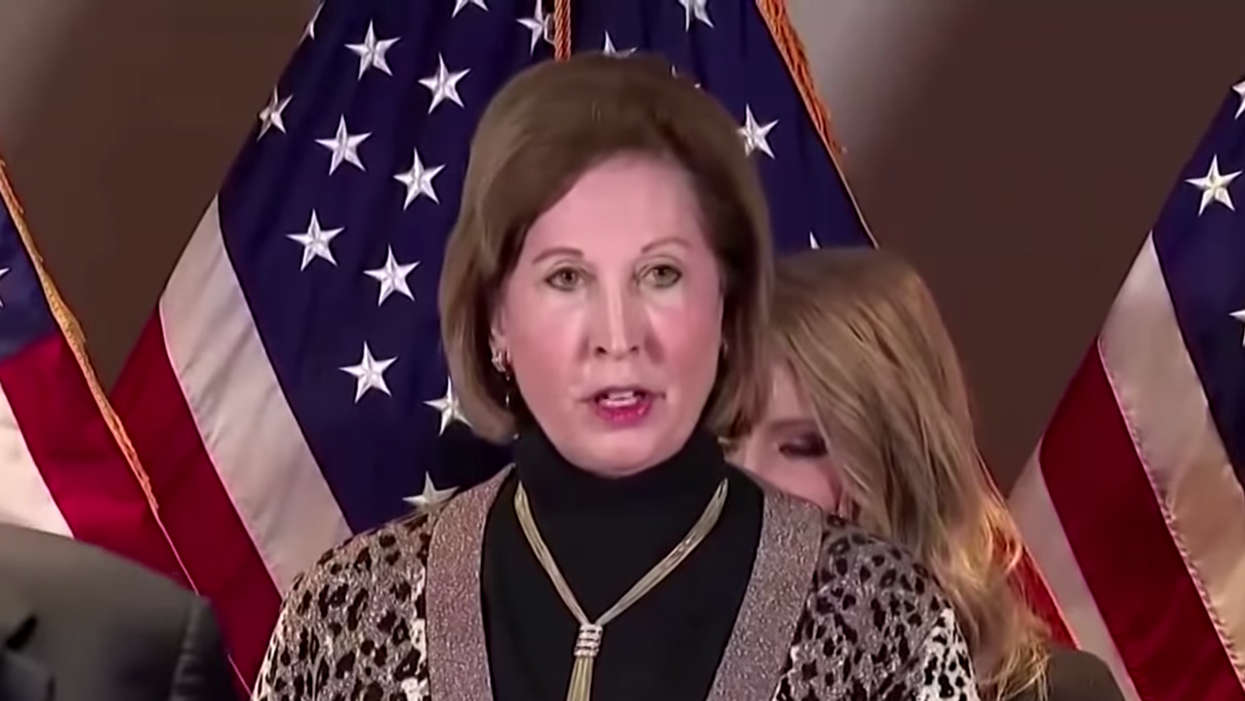 Right-wing attorney Sidney Powell's attempts to overturn the 2020 presidential election have been so outrageous and over-the-top that even President Donald Trump's legal team has distanced itself from her. And according to Law & Crime reporter Aaron Keller, Georgia officials believed that her proposal for inspecting voting machines in that state posed a "security risk."

Georgia is among the battleground states that President-elect Joe Biden won in the 2020 election, but Powell — like other pro-Trump attorneys — has been claiming, without credible evidence, that Trump was the real winner in the Peach State and that the election was fraudulent. In a lawsuit that she filed with Lin Wood, another far-right pro-Trump attorney, Powell wanted her team to conduct forensic inspections of Georgia's voting machines. But during a federal court hearing held on Sunday in the Northern District of Georgia, Russell David Willard — an attorney representing Georgia officials — warned that what Powell, Wood and their team were proposing was downright dangerous.

Powell, during the hearing, told Batten that she wanted to inspect voting machines in ten Georgia counties. "The important part is, it's not just the data that comes out of the machines that is crucial to the fraud case that is so rampant across the country — it is the fact that an algorithm we believe was uploaded to the Dominion machines that weighted the votes for Mr. Biden over the votes for President Trump at approximately 1.22 over .78."

But Willard told Judge Timothy C. Batten, Sr., "You cannot allow, during the midst of an election cycle, a third party to come in and get the proverbial keys to the software kingdom." According to William, "Powell's minions" could "go in and image everything, download the software, and figure out for future elections a way to hack in so that their preferred candidate can win."

"That is, in effect, what they are seeking here," Willard told Batten. "They want to image, as they just said, not only the data on the machines, but also, the entire software package and the security protocols that are set up. That is something no federal court can possibly countenance."

Keller notes that Powell told Batten the Dominion Voting Systems program used in Georgia was also used in Venezuela to help leftist Huge Chavez steal elections in that South American country. But Dominion, in response to Powell's claims, has countered that its software has never been used Venezuela.

Keller also notes that Batten "ordered several machines to remain untouched (in Georgia). The judge chiseled out a decision after much back-and-forth and pleading by Wood). Future briefs and hearings were also set."

'That is a lie': Republican obliterated on CNN for defending efforts to overturn election