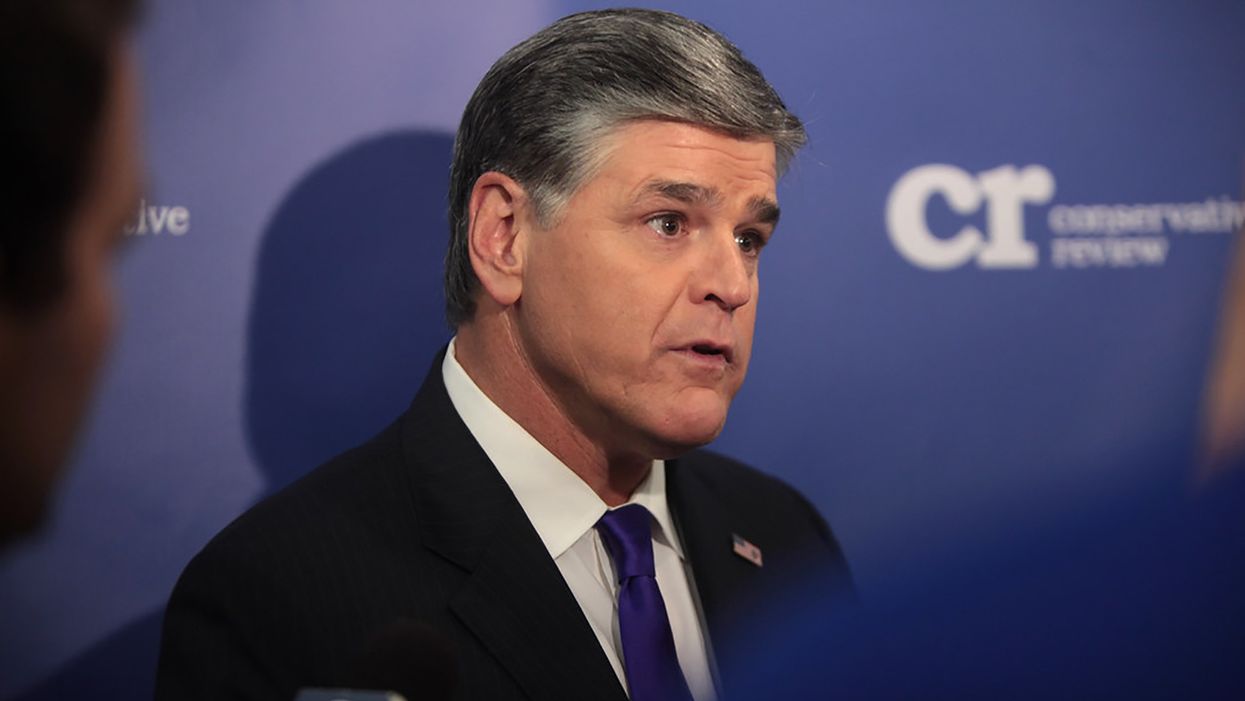 Amid calls to investigate Donald Trump after he leaves office, Fox News host Sean Hannity suggested on Monday that the president "pardon his whole family and himself."

Hannity interviewed Sidney Powell, the attorney representing recently-pardoned former national security adviser Michael Flynn, on his radio show. Powell was ousted from the president's legal team for pushing a conspiracy theory which even Giuliani and Trump thought was bonkers amid repeated losses in court.

Hannity took issue with comments made by former federal prosecutor Andrew Weissmann, one of former special counsel Robert Mueller's top lieutenants, who called for the Department of Justice to investigate Trump after President-elect Joe Biden's inauguration.

"I watched Andrew Weissmann come out and literally say, 'Oh, Biden's A.G. needs to go after Donald Trump.' And I'm like, 'The president out the door needs to pardon his whole family and himself, because they want this witch hunt to go on in perpetuity,'" Hannity said. "They're so full of rage and insanity against the president. I mean, it's — can the president — I assume that the power of the pardon is absolute, and that he should be able to pardon anybody that he wants to."

Though Powell agreed that Trump could pardon anyone else, even she had questions about whether he could pardon himself.

"It is absolute. It's in the Constitution," Powell replied. "I don't know about his authority to pardon himself, but it should not be necessary. And, aside from that, the president is going to get another four years in office."

Powell has waged a roundly-criticized legal and PR campaign pushing baseless allegations that Dominion voting machines, which are used throughout much of the country, switched votes from Trump to Biden in a plot financed by communists from countries like Venezuela, Cuba, and China — but the conspirators got caught because the overwhelming number of votes received by the incumbent president "broke" the algorithm.

Powell was unable to provide a shred of evidence to Fox News host Tucker Carlson, and what little evidence she has presented in court has largely been recycled from previous cases which have already failed. After she alleged that Georgia Gov. Brian Kemp, a Republican, was involved in the plot, Trump attorney Rudy Giuliani issued a statement claiming that she was not part of the president's legal team, even though Trump presented her as his lawyer and she appeared alongside Giuliani at a recent press conference.

Hannity later repeated his idea to former Republican Speaker of the House Newt Gingrich on his TV program after again citing Weissmann's comments.

"If that's what they want to do — if Biden becomes president — I'd tell President Trump to pardon yourself and pardon your family," he said.

Though the president has the power to pardon anyone, it is unclear if he can pardon himself. Many legal scholars say "the only person Trump can't pardon is Trump," even though the president claims that he has the "absolute right to PARDON myself."

"The president can no more autoimmunize himself from future prosecution than he can sell himself Trump Tower or nominate himself for the Nobel Peace Prize," according to a legal analysis in The Washington Post. "Without two parties, it is both illogical and illegal. As a 1974 Justice Department Office of Legal Counsel memo put it: 'Under the fundamental rule that no one may be a judge in his own case, the President cannot pardon himself.'"

Any self-pardon "not only would make Trump look guilty but would be a tacit admission that he was guilty," the analysis added.

Weissmann called for Trump to be investigated amid reports that Biden does not want his attorney general to probe his predecessor but would stay out of the decision-making process.

"[A]s painful and hard as it may be for the country, I believe the next attorney general should investigate Mr. Trump, and if warranted, prosecute him for potential federal crimes," Weissmann, who successfully prosecuted former Trump campaign chief Paul Manafort, said in a New York Times op-ed.

Weissmann noted that Mueller's team said Justice Department guidelines precluded them from prosecuting a sitting president, but "we amassed ample evidence to support a charge that Mr. Trump obstructed justice."

Even if Trump does try to pardon himself, such a move would have no effect on state and local investigations. Trump is currently under investigation for potential fraud by the Manhattan district attorney and a sweeping civil probe into his business practices by New York Attorney General Letitia James, "which could quickly turn into a criminal inquiry," Weissman wrote.

"Pardons would not preclude the new attorney general challenging a self-pardon or the state calling the pardoned friends and family before the grand jury to advance its investigation of Mr. Trump after he leaves office (where, if they lied, they would still risk charges of perjury and obstruction)," he added. "In short, being president should mean you are more accountable, not less, to the rule of law."