Melania 'delighted' to mark holidays after being caught on tape asking who cares 'about Christmas stuff?' 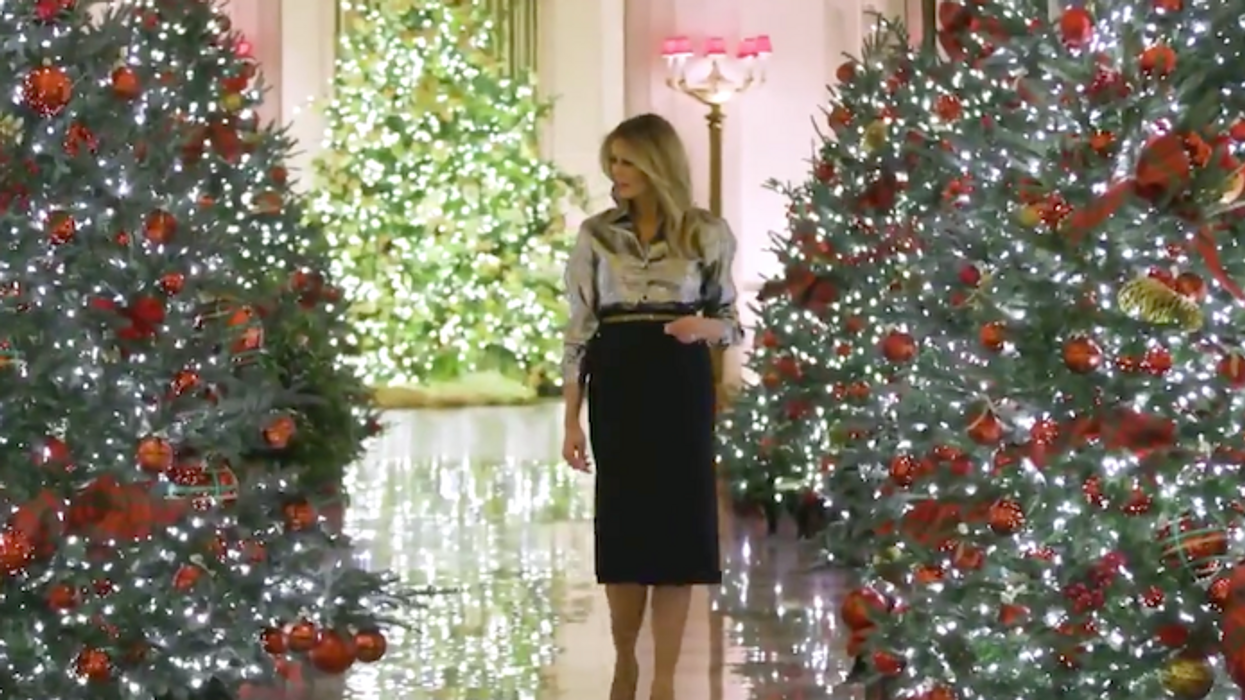 Melania Trump participated in the unveiling of the annual Christmas decorations at the White House for a final time only weeks after the first lady was heard using profanity to describe her holiday planning duties in a secret recording.

Writing on Twitter that she was "delighted" to mark "this special time of the year," Melania unveiled the White House Christmas decor on Monday.

"Together, we celebrate this land we are all proud to call home," she added.

During this special time of the year, I am delighted to share “America the Beautiful” and pay tribute to the majest… https://t.co/kLyWPMJihH
— Melania Trump (@Melania Trump)1606735838.0

A White House press release further touted the "Gold Star Family Tree," despite President Donald Trump's frequent feuds with Gold Star families, and its "Be Best" ornament, referring to the first lady's anti-bullying campaign which has been undercut by her husband's nonstop invective.

"I am excited to announce this year's White House holiday theme, 'America the Beautiful,'" the first lady said in a statement. "From coast to coast, the bond that all Americans share is an appreciation for our traditions, values and history, which were the inspiration behind the decorations this year. Thank you to all of the staff and volunteers who worked to make sure the People's House was ready for the holiday season. Wishing everyone a Merry Christmas and a happy and healthy New Year."

The rollout arrived weeks after Stephanie Winston Wolkoff, a former close friend and adviser of the first lady, released secret recordings from 2018 in which Melania defended her husband's child separation policy and complained about her holiday responsibilities.

In secretly recorded audio, Melania Trump says about reporters asking her about kids separated at border: "Give me… https://t.co/8hTJT4tAfo
— Oliver Darcy (@Oliver Darcy)1601604325.0

I’m very much looking forward to the Hamilton-style musical about Trump when we’ll get to hear Melania’s “Who gives… https://t.co/2et6ttUPnE
— Jon Cryer (@Jon Cryer)1606178593.0

The holidays festivities come as Melania, who also echoed her husband's birther lies, publicly backs her husband's attempt to subvert the election he lost.

"The American people deserve fair elections. Every legal - not illegal - vote should be counted," she tweeted earlier this month. "We must protect our democracy with complete transparency."

Behind the scenes, CNN reported that the first lady "advised him to come to terms with President-elect Joe Biden's victory." But, like her husband, Melania has reportedly not reached out to incoming first lady Jill Biden.

It is unclear what the first lady, who once complained that she was the "most bullied person in the world," plans to do after departing the White House next month.

"I think Melania will probably be secretly relieved," journalist Kate Andersen Brower, the author of "First Women," told USA Today. "This is not what she signed up for . . . She feels like she can't do anything right, and though every first lady feels that way at some point, she has the disadvantage of being married to someone who has burned every bridge to the past."

Melania has also been taking meetings about writing her White House memoir, according to Page Six.

"I'm told her husband is encouraging her," a source told the outlet. "She's not done, or going as quietly as you might expect . . . In the wake of Stephanie Winston Wolkoff's betrayal, in both print and on secret tapes, Melania's story could be worth big money."

Twitter users joked that the book would likely be eerily similar to former first lady Michelle Obama's, a reference to Melania's 2016 Republican National Convention speech. In the address, Melania lifted parts of her predecessor's speech from the 2008 Democratic National Convention.

Another added, "I can not wait to hear about Melania growing up on the South Side Chicago."