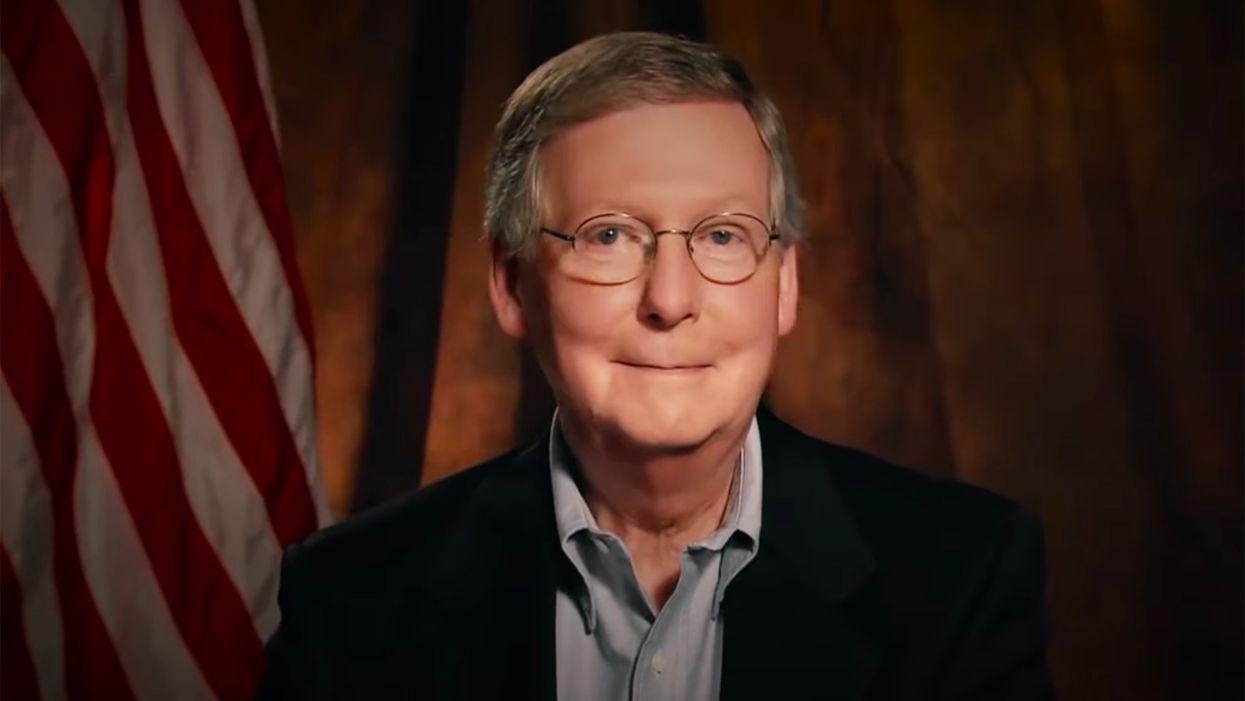 Shortly after blocking efforts by Sen. Bernie Sanders and Senate Democrats to force a vote on a House-passed bill that would provide $2,000 direct payments to most Americans, Republican Majority Leader Mitch McConnell late Tuesday introduced new legislation tying the checks to Trump-backed provisions to repeal legal protections for tech companies and establish a commission to study virtually non-existent voter fraud.

Senate Democrats immediately rejected the Kentucky Republican's bill (pdf) as a non-starter and warned the measure is an obvious effort to ensure that the $2,000 direct payments don't clear the Senate.

"Right now the issue on everybody's mind is how do I survive, how do I feed my kids, how do I not get evicted? So what we have got to do is just demand that McConnell bring forth a clean House bill."
—Sen. Bernie Sanders

"Senator McConnell knows how to make $2,000 survival checks reality and he knows how to kill them," Senate Minority Leader Chuck Schumer (D-N.Y.) said in a statement. "If Sen. McConnell tries loading up the bipartisan House-passed CASH Act with unrelated, partisan provisions that will do absolutely nothing to help struggling families across the country, it will not pass the House and cannot become law."

"Any move like this by Sen. McConnell would be a blatant attempt to deprive Americans of a $2,000 survival check," Schumer continued. "Will Senate Republicans go along with Sen. McConnell's cynical gambit or will they push him to give a vote on the standalone House-passed CASH Act?"

Rep. Don Beyer (D-Va.) echoed Schumer, tweeting that "people are furious with Mitch McConnell for blocking a vote on the bill we passed to send Americans $2,000 checks, so now he's planning to try to kill it by adding poison pills that have nothing to do with Covid relief."

An essential problem with McConnell's legislation, as conservative policy analyst Rachel Bovard pointed out on Twitter, is that it "violates the constitutional requirement that revenue bills initiate in the House."

"This means it can't pass the Congress even if it accidentally passes the Senate," Bovard explained. "The Senate knows it violates the origination clause. The Senate deals with this issue all of the time. But why bother fixing a bill that is supposed to fail?"

Short version is that McConnell created a bill that by law cannot pass. Because he doesn't want anything to pass. I… https://t.co/WrCdiG0McD
— David Dayen (@David Dayen)1609294711.0

Sen. John Cornyn (R-Texas)—a top McConnell ally and an opponent of the stand-alone $2,000 payments bill—suggested Tuesday that the GOP should push legislation attaching the checks to liability protections for corporations that expose workers and customers to the coronavirus, a proposal Democrats viewed as further confirmation that Republicans are dead-set on killing the $2,000 payments.

Cornyn, who voted for Trump's tax cuts for the wealthy in 2017, also expressed concerns about the deficit impact of sending people larger direct payments.

"This is all funny money, borrowed money at this point, and that's another consideration," said the Texas Republican.

The efforts by Senate Republican leaders to prevent so much as an up-or-down vote on the CASH Act came after new polling showed that the proposed $2,000 payments are overwhelmingly popular among U.S. voters, including Republicans.

Some Senate Republicans, including Sens. David Perdue and Kelly Loeffler of Georgia, have voiced support for the $2,000 payments—though they have not backed Sanders' effort to secure a clean vote on the House-passed measure.

In a tweet late Tuesday, Trump reiterated his call for $2,000 payments—up from the $600 checks in the relief measure he signed into law on Sunday—while also demanding that lawmakers repeal Section 230 of the Communications Decency Act and prevent Democrats from "steal[ing] the presidential election," which Trump lost decisively despite his false claims to the contrary.

"Unless Republicans have a death wish, and it is also the right thing to do, they must approve the $2000 payments ASAP," the president tweeted. "$600 IS NOT ENOUGH! Also, get rid of Section 230—don't let Big Tech steal our country, and don't let the Democrats steal the presidential election. Get tough!"

Led by Sanders, members of the Senate Democratic caucus are expected to continue pushing for a clean vote on the House bill, which passed the lower chamber Monday with the support of 44 Republicans. On Tuesday, the Vermont senator stood in the way of McConnell's attempt to schedule a Wednesday vote to override Trump's veto of the National Defense Authorization Act, legislation that would greenlight $740 billion in military spending for fiscal year 2021.

"The House passed, to their credit, a simple, straightforward bill," Sanders told reporters on Tuesday. "Let's not muddy the waters: Are you for $2,000 or are you not?"

In an interview with CNN's Jim Acosta Tuesday evening, Sanders mocked the notion that amid a deadly pandemic and massive economic crisis, the U.S. public is pining for the repeal of Section 230.

"Do you think, Jim, that all over America people are saying, my god, we have to repeal Section 230... my god, that is a major national priority?" Sanders said. "Right now the issue on everybody's mind is how do I survive, how do I feed my kids, how do I not get evicted? So what we have got to do is just demand that McConnell bring forth a clean House bill."

"I can't guarantee that it's gonna win in the Senate," the Vermont senator continued. "We need 60 votes. I think we got a damn good shot to win it. Bring it to the floor for a vote, Mitch."