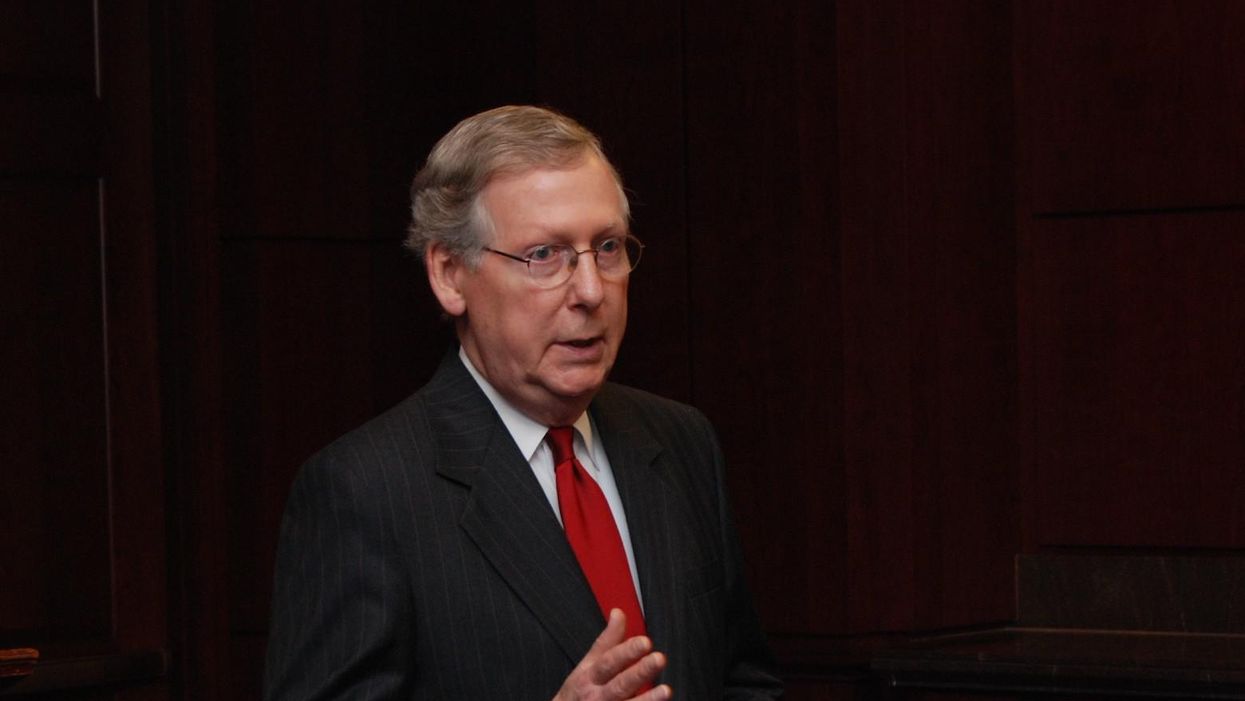 This story has been updated with additional details on the ongoing coronavirus relief negotiations.

Having kept the Senate in session over the weekend to complete work on a nearly $1 trillion coronavirus relief package and an omnibus government funding bill, Republican Majority Leader Mitch McConnell on Saturday moved to advance yet another of President Donald Trump's right-wing judicial appointees as the desperately needed stimulus legislation remained unfinished.

The Republican-controlled Senate's vote to limit debate on Thompson Michael Dietz, a Trump nominee to the U.S. Court of Federal Claims, came as Majority Whip Sen. John Thune (R-S.D.) suggested that coronavirus relief talks could spill into Monday as negotiators struggled to resolve a number of outstanding issues.

Adding urgency to the relief talks is a possible government shutdown Sunday night if negotiators fail to reach a deal on a sprawling funding bill or pass yet another short-term measure. Lawmakers are aiming to attach a coronavirus relief package to the year-end spending legislation.

"As a government shutdown looms, and as the pandemic rages on across America, Senate Majority Leader Mitch McConnell continues to push through Trump's judges until the very end," The Leadership Conference on Civil and Human Rights tweeted Saturday. "This is his top priority."

While coronavirus relief talks have failed to produce anything tangible for months—due in large part to McConnell's refusal to accept an adequate legislative package—the Kentucky Republican has continued steadly pushing through Trump's judicial nominees. Since Trump took office in 2017, the Senate has confirmed more than 200 lifetime judges.

The Washington Post reported that as of Saturday morning, lawmakers working on the coronavirus relief package had "yet to resolve eligibility for small business relief; how to structure unemployment aid; and the criteria for sending out a $600 per person stimulus check"—meaning talks could continue into next week as the Christmas holiday approaches. The day after Christmas, a pair of emergency unemployment programs are set to expire, cutting off aid for an estimated 12 million Americans.

Negotiators also continued to grapple over the GOP's last-minute push—led by Sen. Pat Toomey (R-Pa.)—for language that would terminate emergency lending programs established by the CARES Act and restrict the Federal Reserve's future lending authority, a move Democratic lawmakers have denounced as an effort to hinder the incoming Biden administration's ability to respond to the economic crisis.

"Legislative language circulating early Friday suggested that it would prevent 'any program or facility that is similar to any program or facility established' using the 2020 [CARES Act] appropriation," according to the New York Times. "While that would still allow the Fed to provide liquidity to Wall Street during a crisis, it could seriously limit the central bank's freedom to lend to businesses, states, and localities well into the future."

In a tweet late Friday, Sen. Jeff Merkley (D-Ore.) warned that "Republicans are holding up relief that Americans desperately need in order to add a provision that would cripple the Fed's emergency lending power under a Biden administration."

"Such partisan sabotage, intended to hurt struggling families, has no place in America," said Merkley.

During a Senate GOP conference call on Saturday, McConnell reportedly made clear that he fully supports Toomey's attempt to curb the Fed's emergency lending powers, even as it threatened to derail the relief talks.

Members of the Senate Democratic caucus, meanwhile, are working behind the scenes to increase the size of the unemployment benefits and direct payments in the package.

As Roll Call reported, Sen. Ron Wyden (D-Ore.) is pushing to get the weekly federal unemployment supplement to "as close to $600 as possible," up from the $300-per-week boost currently on the table.

"Similarly, Sen. Bernie Sanders (I-Vt.) said 'we're trying hard' to get direct payments to households higher than $600 per person as currently envisioned," Roll Call reported. "He wants $1,200 as provided in the March law, though that figure seemed unlikely."

Infuriated by the overall inadequacy of the relief package as it stands, Rep. Alexandria Ocasio-Cortez (D-N.Y.) told HuffPost Friday that "Mitch McConnell is willing to let people starve."

The New York Democrat went on to criticize Democratic leaders for failing to use their leverage to press for better legislation.

"There's a window here," Ocasio-Cortez said. "And, you know, I've heard murmurs that Mitch McConnell is actually sweating behind the scenes because he wants to protect [Georgia Sens. Kelly] Loeffler and [David] Perdue. But it's like, if he is actually sweating, then they need to cash in real checks."