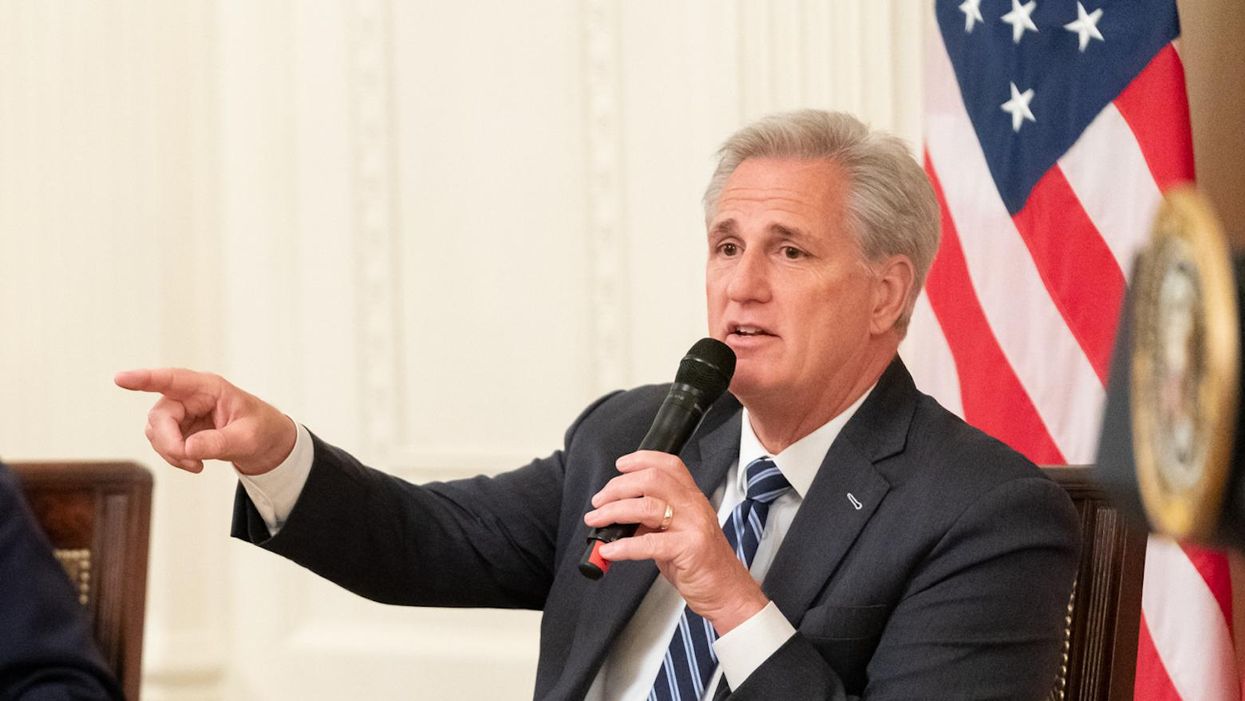 Republican House Minority Leader Kevin McCarthy wrote a letter to his colleagues on Wednesday trying to outmaneuver Speaker Nancy Pelosi in the ongoing fight over the omnibus government spending bill. But his attempt to counter the speaker's moves appear unlikely to gain traction, revealing just how much President Donald Trump has undermined his own party.

Trump pulled the rug out from under Republicans on Tuesday when, in an abrupt turnabout from the White House, he suggested he may block the 5,000+ page spending bill that has been the subject of fierce negotiations between the two parties for months.

The president posted a video on Twitter detailing his objections to the bill, despite the fact that he had been essentially uninvolved in the debate for months and his deputies had indicated he would support the final draft of the legislation. In the video, he criticized the bill for a number of obscure spending provisions, which are a common part of every such bill. And he also demanded that the COVID-19 relief portion increase direct payments to American families from a single $600 payment per person to $2,000. He didn't say explicitly that he'd veto the bill without changes, but he urged Congress to amend its language, leaving the implication clear.

But Democrats have been urging the Republicans to agree to much higher spending, so instead of recoiling Trump's demand, they decide to embrace it. Speaker Pelosi immediately said she would move forward with a measure to increase the payments from $600 to $2,000 — though she is clearly confident that much of the Republican Party will refuse to go along with the plan. This puts the party in a tough bind as the Georgia runoffs elections approach, which could flip control of the Senate to Democrats. Many Republicans are unwilling to spend more government money to help American families, but they know this stance is unpopular and could hurt them in the election.

So in his letter, McCarthy tried to attack Pelosi for allegedly trying to "use the American people as leverage to make coronavirus relief contingent on government funding." But the GOP leader certainly knows that it's not Pelosi trying to exploit her leverage — Trump's implicit veto threat sought to leverage the stakes of the bill, and she simply called his bluff.

McCarthy also tried to frame himself as the defender of the American people, saying the "top priority must be our families, communities, and small businesses as we get through this pandemic and restore our country." But, predictably, he didn't join Pelosi and Trump's calls for more money in the direct payments.

Instead, McCarthy said that Pelosi and the Democrats have "selective hearing," because they ignored all of the demands, such as cutting back on foreign aid spending, that Trump included in his video other than the increased direct spending. This is true — Democrats have acted as though Trump only made a singular demand for $2,000.

McCarthy wanted to turn the tables on Pelosi, saying "we ought to reexamine how our tax dollars are spent overseas while so many of our neighbors at home are struggling to make ends meet. Thus, Republicans will offer a unanimous consent request to revisit the State and Foreign Operations title of the Omnibus so that we can fully address the concerns at hand."

But this attempt to shift the blame for any delay is unlikely to make for an effective message for the Republicans. While it's true that many voters dislike the idea of American tax dollars going overseas, Pelosi's effort to simply increase the direct payments from $600 to $2,000 without any other change to the bill dispels the notion that there's a direct trade-off between aid to foreign countries and aid to Americans. Congress can do both.

What's not feasible, though, is McCarthy's suggestion that Congress reopen debate on the minutiae of government spending with only a handful of days left in the congressional calendar and a government shutdown looming. That's likely an unworkable ask and McCarthy knows it, whereas a quick amendment to increase the size of the direct payments actually could be done in the time remaining.

McCarthy's ask would slow down the delivery of more pandemic relief for Americans, whereas Pelosi's ask would increase the total amount of direct spending to families more than threefold. Democrats will likely feel much more comfortable running on that message heading into the Jan. 5 Georgia runoffs than Republicans will.