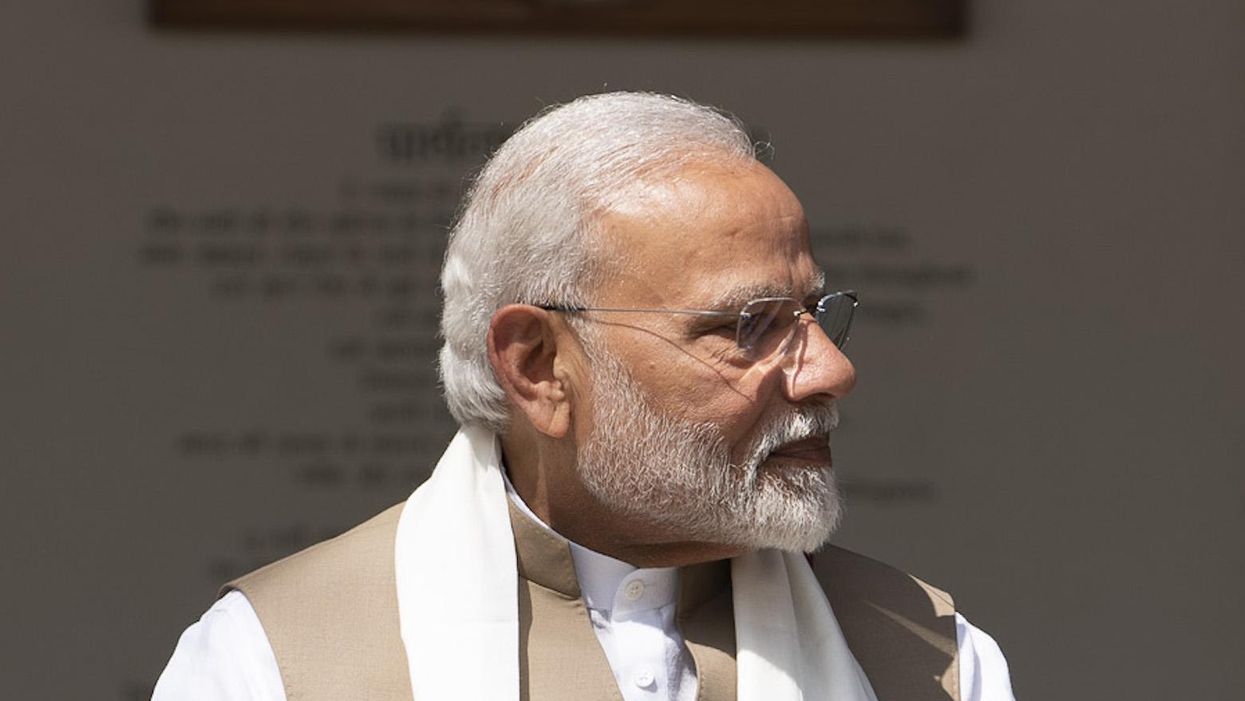 India's farmers are revolting against Prime Minister Narendra Modi's government in a mass movement that has drawn international attention. The world's largest democracy is witnessing a collective groundswell of protest as hundreds of thousands of farmers, largely from the states of Punjab and Haryana, have laid siege to the outskirts of the capital of New Delhi, determined to occupy the edges of the city until Modi reverses unpopular new laws that they say are anti-farmer.

About half of India's workers depend on the agricultural industry, and the government has long had in place regulations to protect farmworkers, acting as a middleman between farmers and buyers of their produce. Now those protections have been upended. In September 2020, Modi and his Bharatiya Janata Party (BJP) pushed three deregulatory bills through Parliament amid chaos and even some opposition from within his own party.

Amandeep Sandhu, author of Panjab: Journeys Through Fault Lines, has been closely following the farmers' protests. In an interview, he explained to me that the first of the three bills scrapped the Essential Commodities Act, a 1955 law that stabilized food prices by preventing traders from hoarding supplies. According to Sandhu, "now traders can stockpile as much food as they want and can play the markets as they wish." Two-thirds of India's population of 1.3 billion rely on subsidized food rations, which Sandhu says are now endangered.

Another of the deregulatory laws would leave farmers to negotiate directly with buyers without government intervention to set basic minimum prices. Although this theoretically could result in farmers being able to demand higher prices, during years when there is a surplus of crops and subsequent plummeting prices, farmers could be financially destroyed. In short, the new laws are designed to subject hundreds of millions of poor farmers to the whims and demands of the market.

Modi's third controversial law centers on contract farming and enables corporate buyers to directly hire small farmers to produce specific crops. But Sandhu explained that it also protects corporations from liabilities. "If a small farmer has entered into a contract with a corporation and the corporation reneges on the contract, the farmer cannot go to court."

Even before these new laws were put in place, India's farmers were being pushed to the brink. Millions are in debt as banks refuse to lend to the cash-strapped workers, driving them to illegal lenders that charge exorbitant interest rates. Farmer suicides in India have been on the rise, exacerbated by the ravages of the coronavirus pandemic this year.

According to Sandhu, "for many decades farmers have been protesting against the 'green revolution' model of agriculture," which emphasizes an increase in productivity above all else including farmer livelihoods. Writing for CNN.com, Simran Jeet Singh and Gunisha Kaur explained, "Just as some medications are tested on humans of developing countries before being accepted in developed nations, the Green Revolution was an agricultural experiment tested out on the fields of Punjab."

In further unleashing market forces on farmers through his new laws, Modi may have gone too far. "These very farmers are the BJP's core constituency," said Sandhu. "These are the ones who got the government elected in the first place."

Offering a stark contrast with struggling farmers are wealthy Indian elites who have seen their riches multiply each year. A 2018 report found that the wealth of the richest 831 Indians amounted to a quarter of India's gross domestic product. Chief among them is Mukesh Ambani, Asia's richest man, who has launched dozens of new businesses in the agricultural sector in just the last few months. India's second wealthiest person is Gautam Adani, and both men are considered close political allies of Modi. Protesting farmers say Modi's controversial farm bills were written to benefit the likes of Ambani and Adani. Earlier in the protests, farmers burned effigies of the prime minister and his billionaire buddies.

Modi has claimed that deregulation will bring wealth and prosperity to farmers and that objections to the laws are purely political. Because most of India's left-wing parties and prominent political figures from the opposition Congress Party have expressed support for farmers, the BJP-led government claims that farmers are being misled into believing the laws are bad for their bottom line. But one farmer from Punjab told Al Jazeera, "There is no politics in it, we feel the laws are going to benefit corporates and not poor farmers like us."

Modi has implored the farmers occupying the edges of Delhi to go home, claiming that the new laws are written to benefit them and are a "gift." He has offered to amend the laws as a compromise, but the farmers are standing firm, saying nothing less than a complete repeal of the laws will be satisfactory. India's former economic adviser Kaushik Basu agrees with them. Basu, who also served as chief economist of the World Bank and is currently a professor of economics at Cornell University, said the bills were "flawed" and "detrimental to farmers." He explained, "Our agriculture regulation needs change but the new laws will end up serving corporate interests more than farmers."

The new laws impact farmers' control over what to grow, whom to sell to, what prices they can rely on, and whether or not their crops will have buyers—all presented in the form of an unsolicited "gift" from a government that for years has ignored their plight. It's no wonder they are rebelling.

Solidarity with Indian farmers is high across the nation. In late November, nearly a dozen trade unions launched a massive general strike, bringing the nation to a standstill for a day. More than 250 million people are estimated to have participated, making it the world's largest protest in history. The farmers called for a second strike a week later and remain on the outskirts of New Delhi, blocking five major highways and saying they aren't leaving anytime soon. Sandhu shared that "farmers from Punjab and Haryana came with rations of their own for six months to one year and are willing to stick it out. The farmers who are coming from longer distances will be fed by those who are already there."

Indian agriculture affects the rest of the world, with a large percentage of the global spice market originating from Indian farms. Exported staples such as rice and milk and even cotton used by the apparel industry could be impacted by the new laws.

Diaspora Indians are now speaking out. Thousands of Indian origin residents of Britain rallied in London, declaring, "We stand with farmers of Punjab." Canadian Indians protested in various cities, with many saying they still had family who farmed in India. In California—home to a large population of Punjabi Indian Americans, many of whom are farmers themselves—a massive car rally in Silicon Valley called attention to the farmers' demands. And in Seattle, Councilmember Kshama Sawant of the Socialist Alternative Party sponsored a resolution to express solidarity with Indian farmers.

For now, a stalemate remains with the government and farmers facing off against one another, refusing to back down. Sawant had perhaps the most eloquent framing of what's at stake, saying, "Indian farmers are facing the same exploitation by the billionaire class that farmers and workers are facing worldwide."