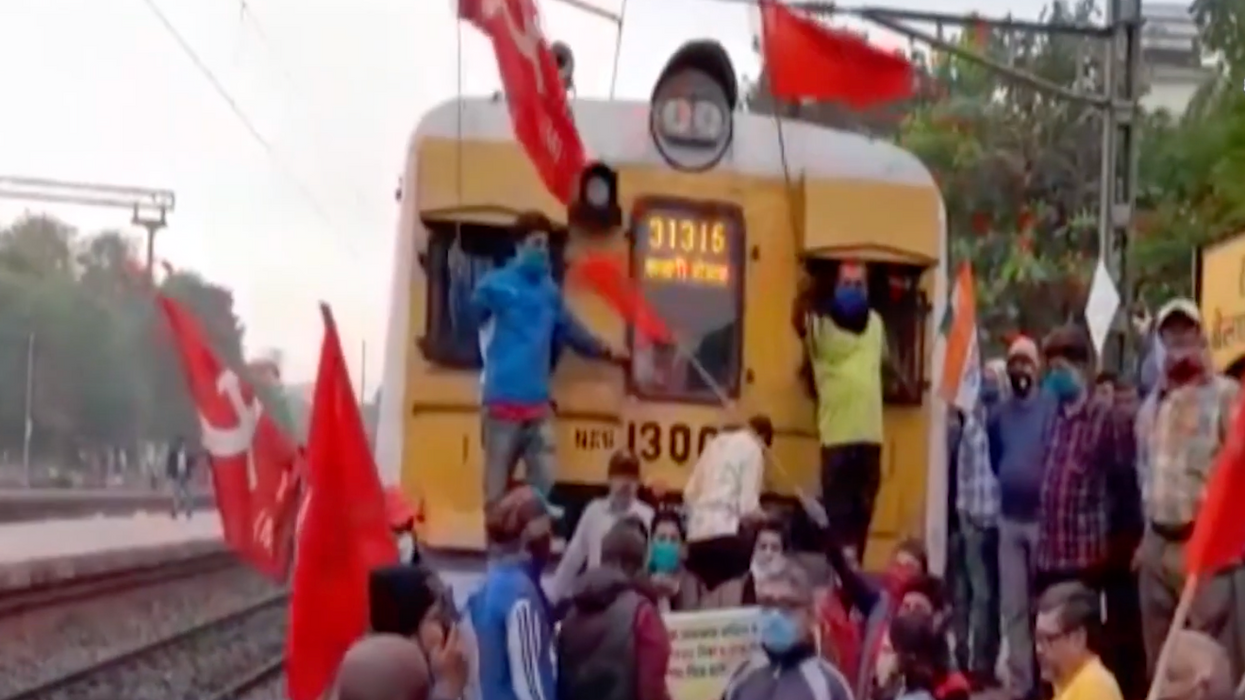 Last week, workers in India launched a huge general strike protesting the corporatist policies of Indian Prime Minister Narendra Modi. And the general strike, according to the democratic socialist website Jacobin, has "converged" with a major protest by Indian farmers.

Jacobin reporter Thomas Crowley explains, "Last week's general strike in India featured some of these components: the call by national-level unions in response to the (Bharatiya Janata Party's) anti-worker policies; the claims of massive turnout — 250 million people, in this case; and the time-limited nature of the strike. But this being 2020, the November 26 walkout also had a different quality to it. Back in March, the government used the pandemic as an excuse to crack down on and clear the last physical remnants of widespread protests against its discriminatory citizenship laws. And so, the sight of people out on the streets in protest was a striking display."

Crowley notes that India's general strike "converged with a march launched by a broad group of farmers' organizations, all planning to descend on the capital of Delhi."

According to Crowley, "Social media was suddenly awash with images of farmers using tractors and trucks to break down the barriers erected by police to keep them out of the city. In one video, a protester emphatically explained to a policeman at the barricades that 'this is a revolution, sir.'"

Crowley observes that as of December 1, India's central government "started meeting with farm union leaders, but protesters say that will keep camping at the border until their demands are met."

"In many ways, the Delhi march was a continuation of protests that erupted in September, when the BJP-controlled national legislature pushed through three controversial bills meant to open up the agricultural sector to large corporate and financial interests," Crowley notes. "Farmers fear the legislation is a prelude to the government dismantling the long-standing system of minimum support prices (MSP), which provide some stability to farmers by setting the price at which the government buys a variety of crops."

Kirti Pandey, a reporter for India's Times Now website, points out that although the protests by India's farmers have been receiving a great deal of coverage globally, many people outside of India don't understand what the protests are about.

Pandey explains that Indian farmers are protesting against two farm bills that were recently passed by the Rajya Sabha, the upper chamber of the Indian parliament: the Farmers' Produce Trade and Commerce Bill and the Farmers Agreement on Price Assurance and Farm Services Bill.

"The two bills had already cleared the lower house (of India's parliament), the Lok Sabha," Pandey notes. "When they were introduced in the Rajya Sabha, there was ruckus."

According to Pandey, the Farmers' Produce Trade and Commerce Bill "allows the farmers to sell their produce outside the Agricultural Produce Market Committee (APMC) regulated markets. The APMCs are government-controlled marketing yards or mandis. So, the farmers clearly have more choice on who they want to sell." And Pandey adds that the Farmers Agreement on Price Assurance and Farm Services Bill "makes provisions for the setting up of a framework for contract farming. The farmer and an ordained buyer can strike a deal before the production happens."

Pandey reports, "The farmers of Uttar Pradesh, Punjab and Haryana are angry with the provisions of these bills, as they are afraid that these bills may be the platform that the government at the Centre is setting up for the replacement or scrapping of the otherwise robust support system prevalent in their states for the purchase of their crops. They fear that the minimum support price (MSP) guarantee that was their safety net since the Green Revolution of the 1960s kicked in may be snatched away…. under the pretext of giving the farmers more playing ground and better platforms."