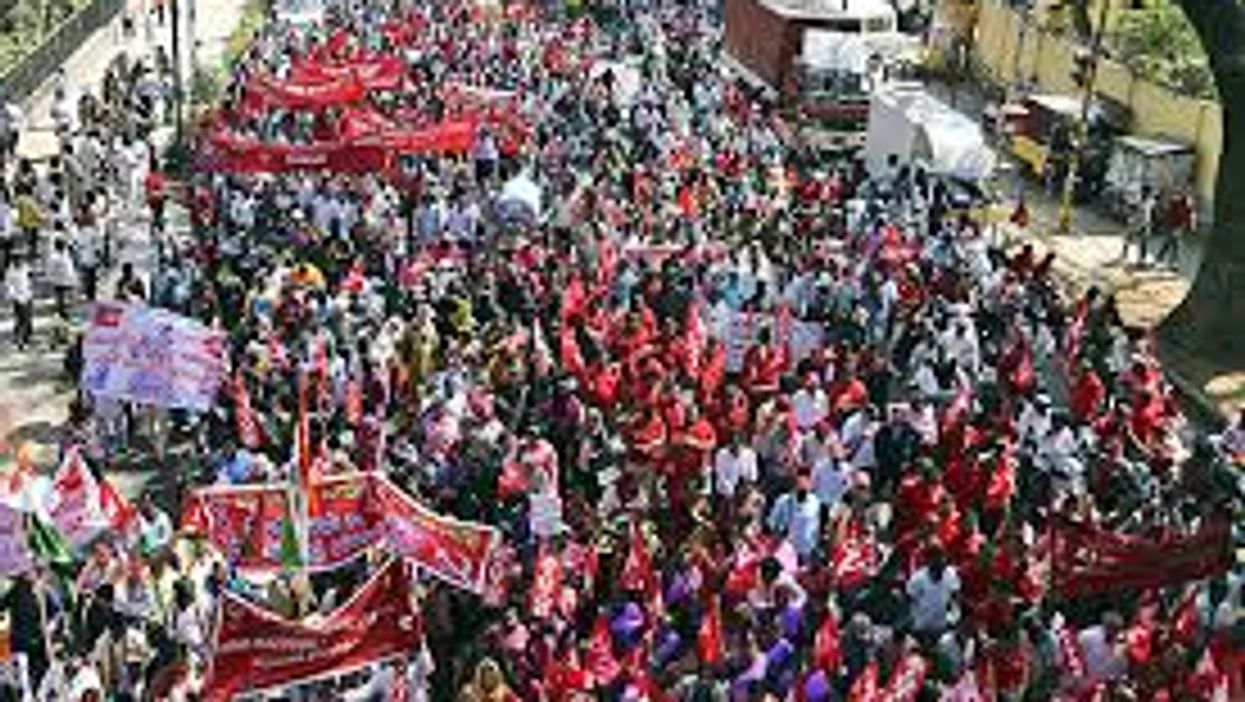 2020 has been a year of ongoing protests and demonstrations for change across the globe. It has also been the year the world saw not only the largest but longest single protest to date. For almost a month now, tens of thousands of farmers in India have marched and protested against three bills passed in India's parliament in September. Since their start in late November, the protests have spread from the Indian capital of New Delhi to other parts of the country and garnered global attention. More than 250 million people across India have participated in not only the ongoing protest but in 24-hour strikes to show solidarity. According to Reuters, nearly 30 people have died as a result of freezing temperatures and at least 10 have died in accidents near protest sites

Despite the severe cold weather, farmers from the northern states of Punjab, Haryana, Uttar Pradesh, and Rajasthan have vowed to stay camped outside of national highways until the laws are repealed. "It's very difficult to camp out in this weather, but we aren't scared," Balbir Singh, an octogenarian from the Patiala district of Punjab, told Reuters. "We won't go back until our demands are met. Even if we have to die here, we will."

The bills in question include the Farmers (Empowerment and Protection) Agreement on Price Assurance and Farm Services Act, the Farmers' Produce Trade and Commerce (Promotion and Facilitation) Act, and the Essential Commodities (Amendment) Act. While the first two laws expand on the marketing infrastructure provided by India's state-level governments and enable direct marketing of farm products to processors, aggregators, wholesalers, large retailers, and exporters, the third law works to facilitate the production, movement, and distribution of farm produce by removing existing regulatory barriers. As a result, farmers' already depressed wealth is further reduced.

Prime Minister Narendra Modi argues that under these laws the agricultural system will be streamlined and farmers will have more freedom to sell their goods at any price directly to private businesses, as opposed to having to sell their produce through auction, known as the "mandi system." However, farmers argue that these bills will collectively privatize the agricultural system, making them vulnerable to corporate exploitation.

Additionally, under the new laws large corporations can dominate the market by driving down prices and diminishing any advantage farmers had at setting their own produce prices. This will add to India's growing unemployment and the debt the farming community is already facing.

According to Al Jazeera, many farmers argue the current state-controlled "mandi system" needs reform within the food supply chain to give farmers more options to sell their crops to make a profit, and that these new laws will only further disempower farmers economically and within the agricultural system as a whole.

Despite consistent development in the tech sector, agriculture still remains the largest source of income for most Indians, employing more than one-half of the subcontinent's workforce. However, despite feeding a significant portion of India's economy and people, farmers themselves have struggled for years, often bearing debts and losses as a result of not only marketed goods but severe weather changes resulting from climate change.

While Modi and his corrupt government maintain that these laws will protect farmers, these farmers, who are often elderly, refuse to stop protesting until their demands are met. "We're worried no one will buy our produce, and that we'll go into debt," Harinder Singh, general secretary of a Punjabi farmers union, told NPR. "We want the government to repeal these laws."

Similar to protests in the U.S. in which peaceful demonstrators are met with police-induced violence, protesters in India have faced harsh and violent retaliation from the government. At the start of the protest on Nov. 25 when marchers first reached New Delhi, police officials not only used tear gas and water cannons against protesters but damaged roads outside the city to prevent them from entering. Photos and videos went viral on social media depicting the brutal tactics police officials were using, including beating protesters. Despite this, farmers and their allies continued to march on and were even filmed feeding some of the officers who beat them.

As a result of global attention and the ongoing protest being the largest and longest one in human history, talks between representatives of a farmers union and government officials are scheduled to take place this week. This has come as a shock to many South Asians, as the Modi government is not known to talk about issues and instead inflict violence on protesters of its policies.

While these protests are taking place mainly in India and are in favor of Indian farmers, it is important to note that they impact conditions and people outside of the country. "The pandemic has shown us that there are two economies," Simran Jeet Singh, a scholar of religion and history currently teaching at Union Seminary, told CNN. "Essential workers across the world are suffering. The farmers in India represent all of them, and their resistance to unjust legislation that privileges the uber-wealthy corporations is a resistance that speaks to so many of us all over the world."

Not only is India one of the world's largest producers and exporters of spices, but the places in which these protests are happening lead the world's export in Basmati rice and milk. Outside of food, these herbs are used for homeopathy and medical practices as well. Odds are that something in your home was made in India and would not have been had these farmers been protesting earlier. These protests impact not only the livelihood of farmers in India but also how you receive the goods you use on a daily basis, whether it be spices or cotton found in your clothing or bed sheets.

"Even if you don't feel a personal connection to India or the farmers out there like many of us do, as a human being who lives on earth you should be concerned about exploitation of the people who feed you everyday," Ramanpreet Kaur, a Sikh Punjabi woman in New York, told CNN.

People from all across the world including the U.S. are partaking in solidarity movements with these farmers because even if you do not consume the goods they produce, this is a humanitarian issue. Human beings should always be valued over corporations. A number of nonprofit organizations like Khalsa Aid are working to provide protesters and organizers with food and other supplies. Even if you cannot protest, you can help these farmers in a number of ways, including donating to organizations that help the families impacted such as Sahaita. Whether you are Indian or not should not matter: Exploitation should not be ignored.