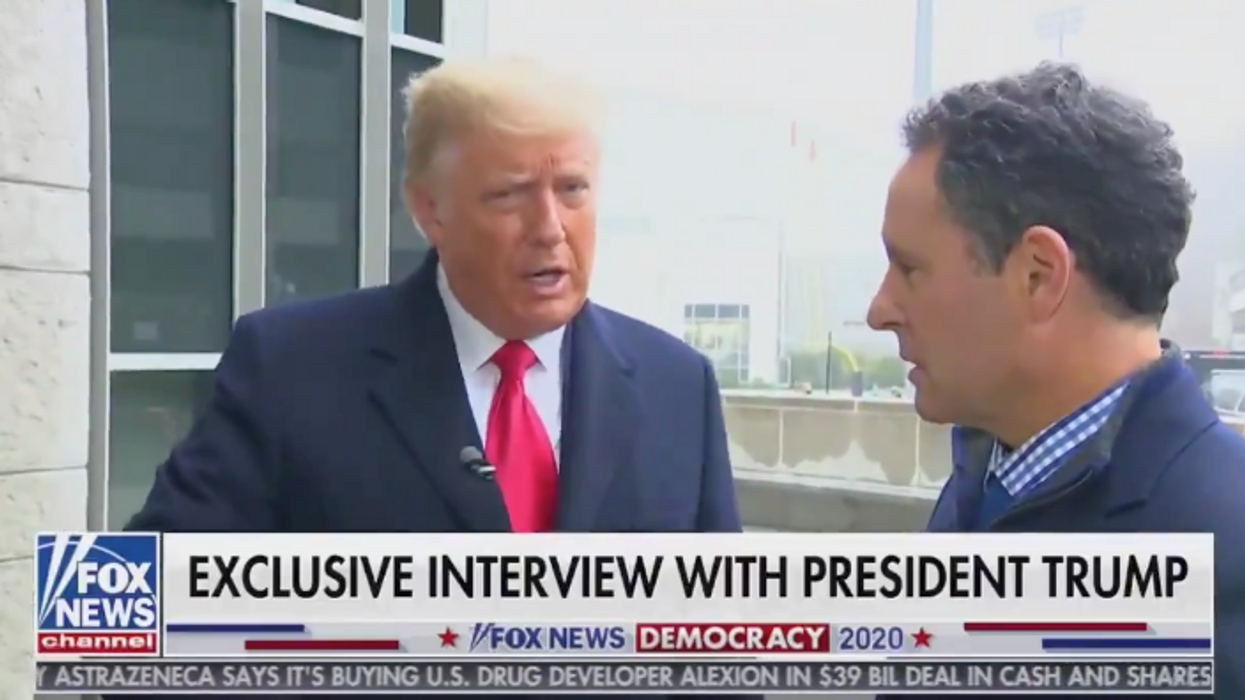 Americans who watched Fox News' Brian Kilmeade interview President Donald Trump are outraged at the "Fox & Friends" co-host's "groveling" and "allowing" the president to spew "lie after lie after lie."

Americans have grown accustomed to watching President Trump lie repeatedly, and while they are still outraged daily by those lies, they expect members of the press to definitively correct the record in real time when he does.

Not only did Kilmeade let Trump spew falsehoods with abandon in his Fox News interview that aired Sunday morning, Kilmeade actually spun the lies himself.

The outrage is so palpable "Kilmeade" is trending on social media. It's rare when journalists attract more anger than the President, but Kilmeade's refusal to tell the public the truth appeared to be a turning point for even some Republicans.

For example, in this clip Kilmeade poses a question noting that when Trump was sworn in to office the military's budget had been cut by 25%. Much of those cuts were forced by Republicans via sequestration, a fact Kilmeade didn't bother to tell viewers. But worse, he used Trump's repeated lie, falsely saying that military was "out of bullets," as a basis for his question. That dangerous lie has been disproved countless times, including today by retired lieutenant general Russel L. Honore' (below, in a tweet.)

During interview with Trump that was recorded at the Army-Navy football game, @kilmeade embarrassingly echoes a lie… https://t.co/x1C9PrF01H
— Aaron Rupar (@Aaron Rupar)1607864690.0

Kilmeade also let Trump get away with this lie: "The Supreme Court, all they did is say we don't have standing."

That's false. In that case, filed by the Texas attorney general and joined by 17 others states and 126 GOP members of Congress, the Supreme Court voted 7-2 to decide they did not have standing – but said unanimously if they had taken the case they would have voted against it.

Kilmeade ignored that most important fact, allowing Trump's dangerous lies to continue, lies that are now leading to violence on America's streets.

Here's how many are reacting:

I like the way the @kilmeade doesn’t even pretend to have a shred of journalistic integrity anymore just parrots li… https://t.co/N9tJAV5tbO
— Mat Poynter (@Mat Poynter)1607871290.0

Just like the other MAGA cult members, @kilmeade dare not question the god king Trump or else he will suffer the co… https://t.co/oNo0oFcX8x
— $₡ƦEE₦₡λPPEƦ (@$₡ƦEE₦₡λPPEƦ)1607871891.0