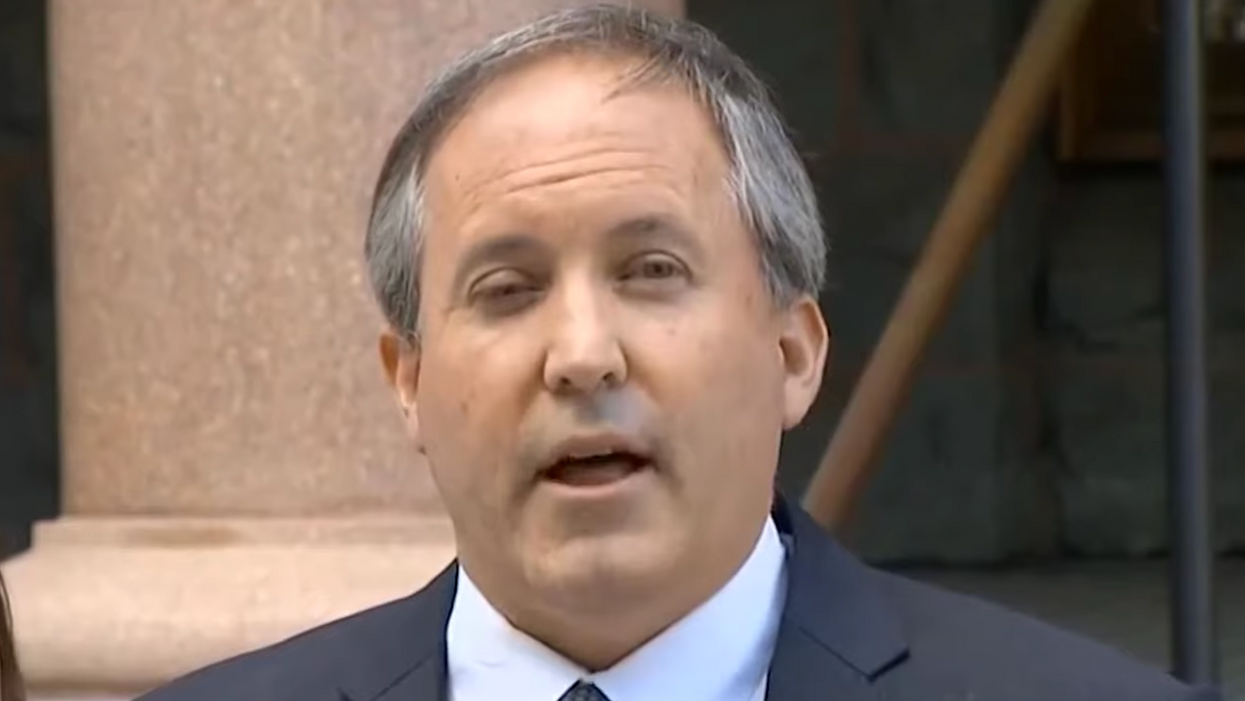 Texas Attorney General Ken Paxton, a far-right Republican who serves in Gov. Greg Abbott's administration, has filed a lawsuit asking the U.S. Supreme Court to throw out the election results in four battleground states that President-elect Joe Biden won: Pennsylvania, Georgia, Michigan and Wisconsin. Conservative law professor Kimberly Wehle offers a comprehensive analysis of Paxton's arguments in an article published by The Bulwark on December 8, and she tears them apart, one by one.

Wehle, who teaches at the University of Baltimore Law School and is a former assistant U.S. attorney, explains, "Here we go again: another insane lawsuit, another assault on the legitimacy of the only remaining branch of the federal government that's still functioning post-Trumpdom — the judiciary. Today, Texas Attorney General Ken Paxton filed a lawsuit on behalf of the State of Texas against four other states: Georgia, Michigan, Pennsylvania and Wisconsin. The lawsuit claims that the four defendant states didn't comply with their own laws for changing how the 2020 election would be held, that it hurt Texans, and that Paxton's the guy to right that wrong."

Wehle adds that although Republican supporters of President Donald Trump have filed around 50 lawsuits against the election results and claimed, without evidence, widespread voter fraud, Paxton's is especially flawed. The law professor notes that Paxton "brought the suit by filing a complaint directly in the U.S. Supreme Court" and ignored the usual "judicial hierarchy" of the United States' federal courts — and Paxton, according to Wehle, is approaching the High Court with incredibly bad arguments.

"(Paxton's lawsuit) makes a slew of audacious factual allegations that are unestablished and untested," Wehle observes. "Basically, he argues that the state defendants shouldn't have allowed mail-in balloting the way they did and cites 'mysterious late-night dumps of thousands of ballots at tabulation centers; illegally backdating thousands of ballots,' and videos of 'poll workers erupting in cheers as poll challengers are removed from vote counting centers' — among an avalanche of other unsubstantiated and previously repudiated factual claims."

"Bald allegations," according to Wehle, are "not enough to get relief" in a "routine case" — and Paxton is approaching the highest judicial body in the U.S. with his allegations.

Wehle notes, "Paxton is asking the U.S. Supreme Court to extend the December 14 deadline on which each state's electors will cast their slates of Electoral College votes according to the laws of the respective states…. Paxton is asking five unelected justices with jobs for life to cancel the millions of votes legitimately cast in four states and tell the legislatures in those states to give the electors to Trump. Even (Texas Sen.) Ted Cruz only wants to wipe out all the votes from just one state."

Wehle, along with CNN legal analyst Elie Honig, discussed that Pennsylvania lawsuit as well as Paxton's lawsuit when she appeared on Don Lemon's CNN show on Tuesday, December 8. Honig and Wehle both stressed that the High Court had so low an opinion of the Pennsylvania lawsuit that they wouldn't even give it the time of day.

One line, unanimous rejection by the Supreme Court. Might as well have said “Hit the bricks, Mr. President.” https://t.co/DqjdvHnybR
— Elie Honig (@Elie Honig)1607489019.0

In The Bulwark, Wehle describes Paxton's lawsuit as "a wholesale assault on 'We the People' — citizens of a country founded on principles of self-government. And it's an assault on the sovereignty of fellow states. Truly breathtaking."

The University of Baltimore law professor adds, "There are numerous other legal flaws in the complaint, including Paxton's strained claim of 'standing' — i.e., the particularized injury that's necessary to get before a court — which verges on laughable. Paxton claims that Texas 'is acting to protect the interests of its respective citizens in the fair and constitutional conduct of elections used to appoint presidential electors.' What about the interests of the rest of American voters? And for that matter, what about the interests of Texas voters who chose Biden? Paxton doesn't seem to bother with them. But then again, let's not forget that Trump is on a pardon spree and Paxton was indicted in 2015 for felony securities fraud charges but has yet to be tried."