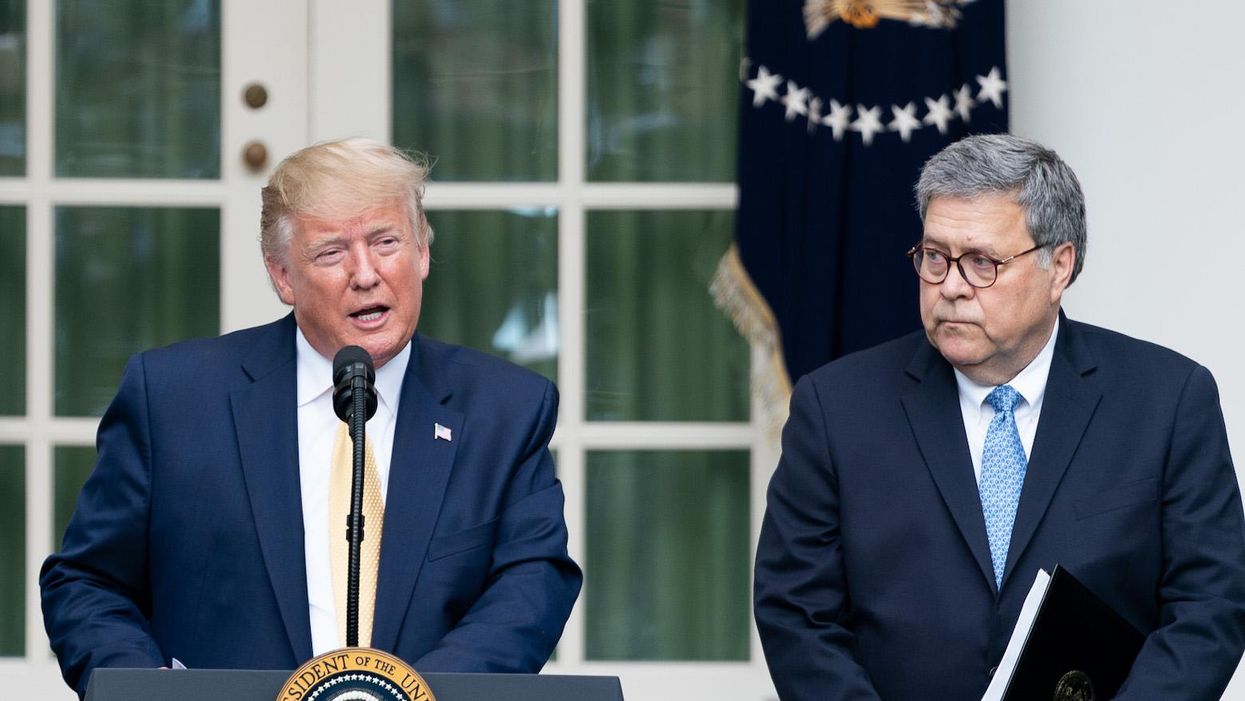 President Donald J. Trump, joined by Secretary of Commerce Wilbur Ross and U.S. Attorney General William Barr, delivers remarks Thursday, July 11, 2019, in the Rose Garden of the White House to announce he will issue an Executive Order ordering every department and agency in the federal government to provide the Department of Commerce with all requested records regarding the number of citizens and non-citizens in our country. (Official White House Photo by Shealah Craighead)
Jessica Corbett
and
Common Dreams
December 04, 2020

Within the past two weeks, as President Donald Trump spread lies about voter fraud and refused to accept his loss of the November election, White House liaison Heidi Stirrup was barred from the U.S. Department of Justice building in the nation's capital for pressuring staff to give her inside information about investigations into election fraud and other issues, the Associated Press revealed Thursday.

The move came just a few months after Stirrup "was quietly installed" to serve as the president's "eyes and ears" at the department, according to the AP, which noted that she is a close ally of Trump senior adviser Stephen Miller, the mastermind behind the administration's cruel immigration agenda. Stirrup was previously acting director of the Office of Refugee Resettlement and a deputy White House liaison at the Department of Health and Human Services.

"Stirrup had also extended job offers to political allies for positions at some of the highest levels of the Justice Department without consulting any senior department officials or the White House counsel's office and also attempted to interfere in the hiring process for career staffers, a violation of the government's human resources policies," the AP reported.

The outlet noted that though she was told to vacate the premises, Stirrup "technically still remains in her position after being placed at the Justice Department by the White House Office of Presidential Personnel." The report broke as the White House on Thursday announced her appointment to the board of visitors to the United States Air Force Academy.

Along with Stirrup's appointment, Trump announced several others—including lobbyist Brian Ballard to the board of trustees of the John F. Kennedy Center for the Performing Arts and lobbyist Jeffrey Miller to the United States Holocaust Memorial Council.

Regarding those two appointments, the Daily Beast reported that "the apparent parting gift for two of the president's most lavish financial supporters installs them in largely ceremonial roles where they will serve well into President-elect Joe Biden's administration."

While Biden is assembling his administration in the lead-up to his inauguration planned for January 20, Trump continues to tweet baseless allegations about election fraud and file lawsuits contesting the results—even though his own attorney general, William Barr, told the AP earlier this week that the DOJ has seen no evidence of voter fraud that would change the outcome.

The interview sparked speculation that Barr will soon become just the latest official to be fired for defying the president, as well as surprise. The watchdog group Citizens for Responsibility and Ethics in Washington (CREW) tweeted: "Not even AG Bill Barr, one of Trump's most notorious enablers, is willing to keep up the pretense of fraud in the 2020 election. That says a lot."

Trump fired back on Thursday, telling reporters during an unrelated event in the Oval Office that Barr "hasn't done anything" about the president's unfounded allegations of election fraud and that DOJ officials "haven't looked very hard, which is a disappointment, to be honest with you."

Meanwhile, Wisconsin's right-wing Supreme Court on Thursday declined to hear one of the many lawsuits that the Trump campaign has filed in an effort to throw out legally cast ballots. This particular case, filed earlier this week, is about more than 221,000 ballots in two of the state's most Democratic counties.