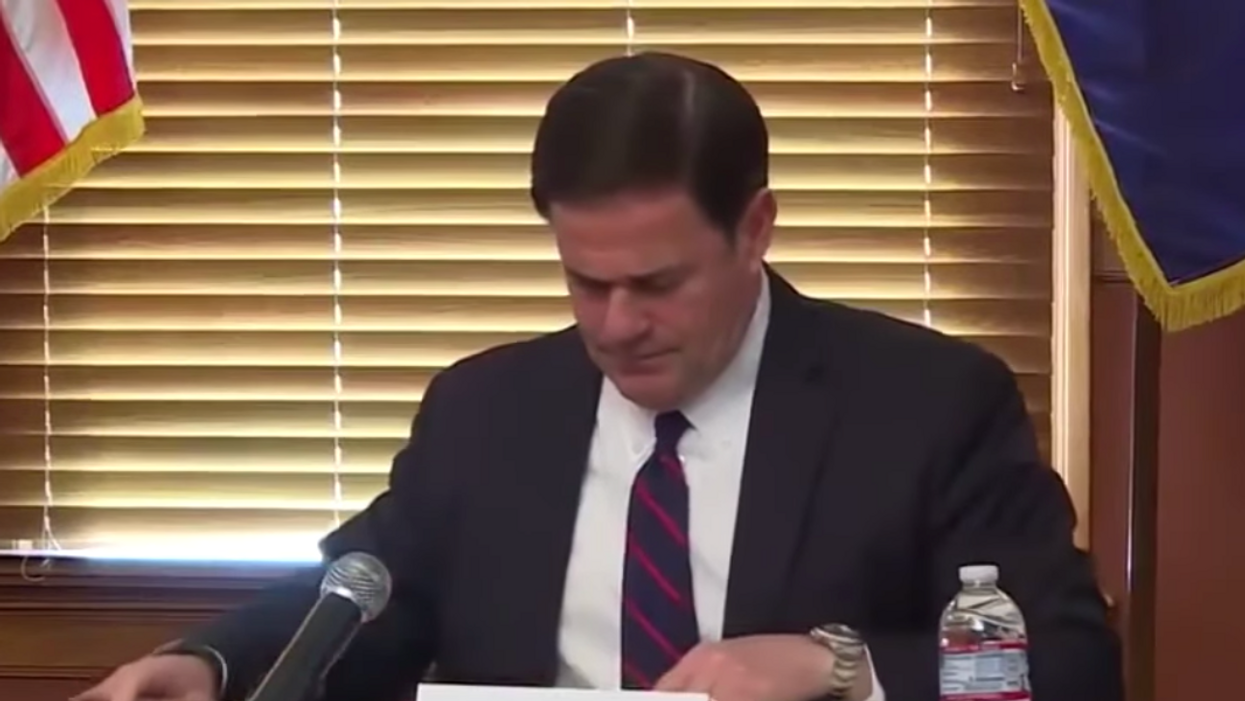 On Monday, November 30, Republican Arizona Gov. Doug Ducey certified the November 3 election results in his state — acknowledging that former Vice President Joe Biden is president-elect of the United States and that Democrat Mark Kelly defeated Republican Sen. Martha McSally in Arizona's 2020 U.S. Senate race. President Donald Trump and some of his supporters have been raging against Ducey on Twitter, but Ducey didn't certify Arizona's election results to stab Trump or McSally in the back — he was merely doing his job. And the political reality is that Arizona has evolved into a swing state and is no longer the deep red Goldwater Republican stronghold it was for so long.

I’ve been pretty outspoken about Arizona’s election system, and bragged about it quite a bit, including in the Oval… https://t.co/axkMQ3mSej
— Doug Ducey (@Doug Ducey)1606790882.0

When Ducey was signing Arizona's election results, he received a phone call from the White House — and he let it go to voicemail.

MSNBC's Rachel Maddow noted, on her show, how pro-Trump Ducey has been. Ducey, on July 9, even bragged that he had a special "Hail to the Chief" ringtone on his cell phone for calls from the White House.

When Ducey was signing Arizona's election results on November 30, his cell phone rang. But despite hearing "Hail to the Chief," he didn't pick up. Instead, Ducey kept signing the certification.

Maddow isn't the only one at MSNBC who has pointed out that Ducey let the White House's call go to voicemail. On Tuesday morning, December 1, "Morning Joe" hosts Joe Scarborough and Mika Brzezinski had a good laugh over the fact that certifying Arizona's election results was a higher priority for Ducey than a call from the Trump White House.

Trump and his supporters, meanwhile, are furious with Ducey for doing his job, and the Arizona Republican has been the target of many venomous tweets from Trumpworld:

But the reality is that Ducey is not the governor of a deep red state — even though Arizona certainly fit that description in the past. And in 2021, Arizona will have two Democratic U.S. senators: Kelly and Sen. Kyrsten Sinema, who defeated McSally in the 2018 midterms. McSally lost not one, but two, U.S. Senate races in her state. After McSally lost to Sinema two years ago, Ducey appointed her to the Senate seat once held by Sen. Barry Goldwater and after that, Sen. John McCain — only to watch McSally lose to another Democrat this year. Following three major statewide Democratic victories in Arizona — Sinema in 2018, Biden and Kelly in 2020 — the state's evolution from deep red state to swing state is undeniable.

Why is he rushing to put a Democrat in office, especially when so many horrible things concerning voter fraud are b… https://t.co/sjNIz8E1GN
— Donald J. Trump (@Donald J. Trump)1606779559.0

For decades, Republicans considered Arizona the gold standard when it came to right-wing politics in the southern United States. Goldwater suffered a landslide defeat when he ran against President Lyndon B. Johnson in 1964's presidential election — a fact that can be attributed, in part, to the Johnson campaign's infamous "daisy ad," which painted Goldwater as a warmongering extremist who would get the U.S. into a nuclear war:

In Arizona, however, Goldwater continued to be quite popular long after 1964 — and over the years, Democrats in Congress developed a certain respect for him. Democrats applauded Goldwater for his willingness to put his country over his party when he encouraged President Richard Nixon to resign because of the Watergate scandal in 1974. Then, during the 1980s, Democrats — for all their policy differences with Goldwater — admired his willingness to slam the Christian right and say that far-right evangelicals like Pat Robertson and the late Rev. Jerry Falwell, Sr. were terrible for the GOP.

After Goldwater resigned from the Senate and McCain was elected to his seat during the 1980s, McCain proudly called himself a "Goldwater Republican" and a "Goldwater conservative." In Arizona, being a "Goldwater Republican" was a badge of honor — and now, when Sinema praises McCain as her role model, she is, in essence, calling herself a Goldwater Democrat. Cindy McCain, Sen. McCain's widow, endorsed Biden over Trump this year — which isn't surprising in light of how vehemently her late husband despised Trump and how well Biden got along with John McCain when they served in the Senate together.

There is a major caveat to the victories of Sinema, Kelly and Biden in Arizona: all of them are quite centrist. Many of the more progressive and left-of-center Democrats have been frustrated by Sinema's decidedly middle-of-the-road and mildly conservative voting record.

But there has clearly been a shift in Arizona politics. And Ducey was, in essence, acknowledging that when, on November 30, he certified the victories of Biden and Kelly — much to Trump's chagrin.