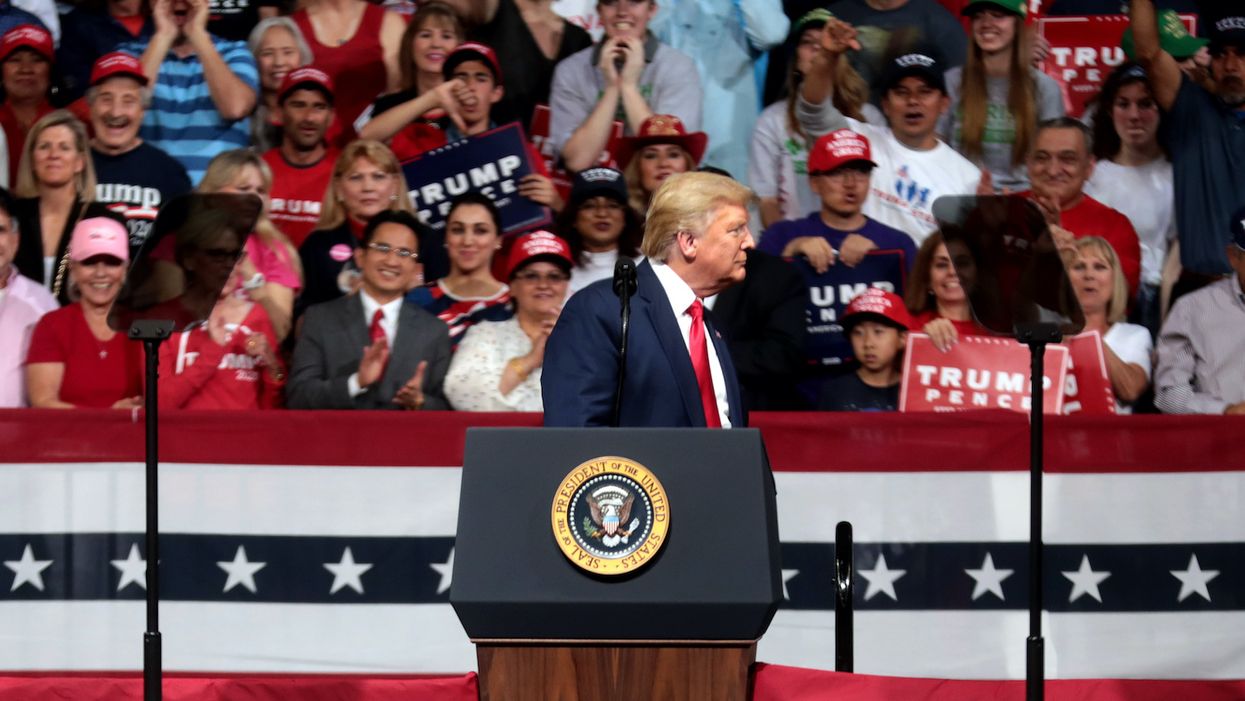 Donald Trump put on an uncommonly sad face at his rally today in Pennsylvania, and it's triggering his minions' fear that the monarchy is in jeopardy.

Their fears may not be irrational, based on early accounts of the rally's dour tone from reputable sources. Trump was speaking from Newton, PA, the first of four rallies planned for Trump in the critical state of Pennsylvania today.

He again encouraged his supporters to go to Philadelphia and scrutinize polling places there, the Inquirer reported. "Only official campaign poll watchers certified by the city can do that. He suggested that Gov. Tom Wolf, a Democrat, would be tampering with mail ballots. County elections officials process ballots, not the Wolf administration. And he signaled that if results aren't known the night of the election, they can't be trusted."

The paper also reported that Trump darkly "drew an ominous parallel to the 2020 election, the stakes of which both parties have framed in apocalyptic terms. "It was a tough night," Trump said in Newtown. "It was a violent night. … It turned the entire tide of the war."

Trump was speaking, blasphemously, outside the house George Washington used to stage his crossing of the Delaware River during the Revolutionary War.

In its reporting of the rally in a muddy field, where an unusually small crowd packed together largely without masks, the Wall Street Journal didn't note the somber mood, but reported this less-than-uplifting focus of the president:

"That is a terrible, political horrible decision that they made," Mr. Trump said. "We're going to be waiting. November 3 is going to come and go and we're not going to know and you're going to have bedlam in our country."

The president suggested that the public could be waiting for weeks and said "many bad things" can happen with ballots, the paper reported.

Trump did predict victory in Pennsylvania. "Three days from now, this is the state that will save the American dream," Trump said, according to a local television station.

That public concession of relying upon Pennsylvania to save the election did not sound like that confident of much a victory.

Some friendly commenters at Breitbart's website even picked up on the theme in real-time. They, too were whiny:

"He looks exhausted. The man keeps a schedule like no one else, especially his age, can keep. Look at Biden, so sure the fix is in that he's hardly said boo and refuses to answer questions. We need him to win."

"OMG is he tired! He's got an incredible schedule, but, he keeps on plowing through it."

Trump's dour mood Saturday was not well-received by some fans on Twitter.

Trump fans were not the only ones who picked up on his dejected demeanor: