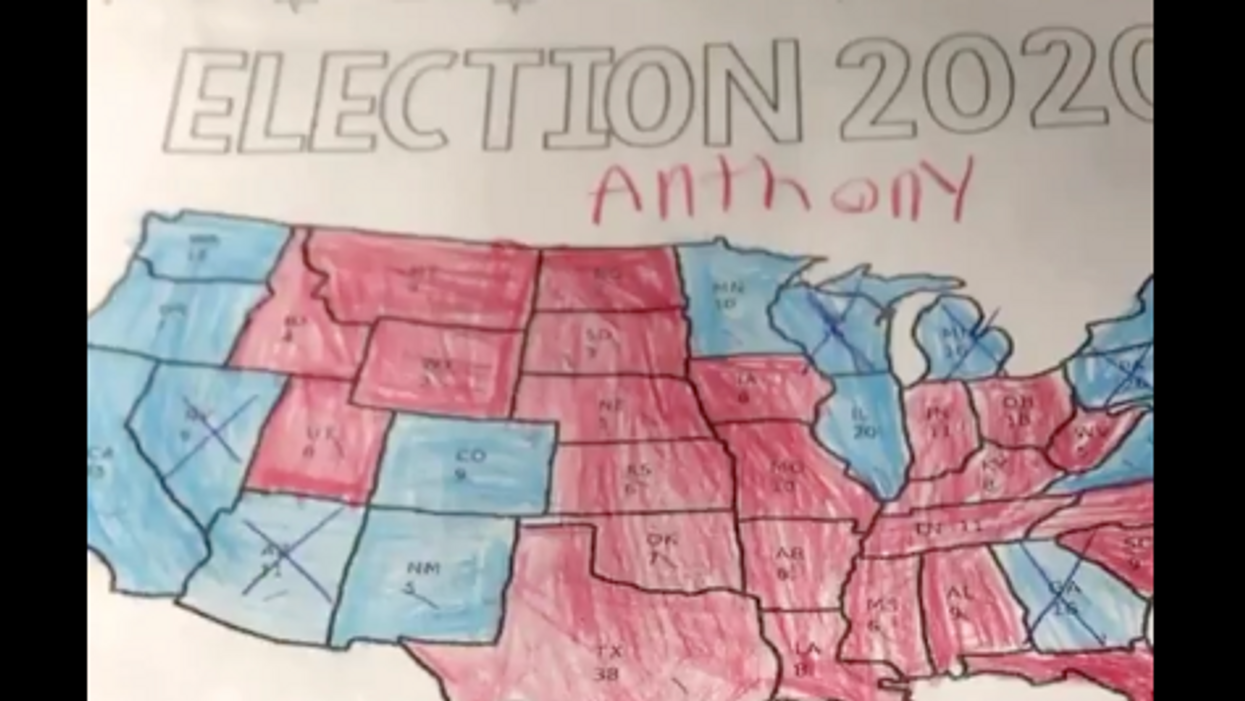 File this one under nonsense these poor teachers have to deal with: A parent can be heard in viral video shared on Twitter Tuesday venting irrationally about the election and trying to argue that no one won it, despite clear evidence to the contrary. In the video viewed more than five million times, a state map is colored in with blue for President-elect Joe Biden or red for President Donald Trump to represent which candidate won each state, but on the student's map in question, X's had been drawn on Nevada, Arizona, Georgia, Wisconsin, Michigan, and Pennsylvania, all of which the student colored blue to accurately reflect that Biden had won those states.

At the bottom of the assignment, the student had answered the question of who won the election correctly with Joe Biden, but the parent employed a different interpretation of reality. She can be heard asking the teacher to talk to Anthony and the whole class about the election process, and by "talk to them," she obviously means lie to them about who won.

"Okay I understand your concerns. Thank you for sharing your concerns, and like I said, I will talk to him tomorrow," the teacher says at one point. Not accepting that response, the parent pushed: "So you're just going to talk to Anthony? This assignment's not going to get redone and have everybody understand that we have six states at this point—there were seven when this assignment was done—there are six that are still in litigation and why?"

She continued: "Even if you don't go into that kind of detail for third graders, to explain to them, you can't. This answer 'who won the election' should've been, the answer was nobody. That was the answer—nobody. Not Joe Biden. It was nobody. It should not just be told to my son."

She went on to argue that the entire school system should be teaching that no one won the presidential election. "Either don't address it or address it properly," the woman said. "There's no, there's no, well, there is gray area. There's six of them, so I am bringing this up. I'm not done. I am upset about this."

She then cited the National Archives, which hasn't announced election results, and the conservative news network One America News as proof her interpretation of Electoral College results is accurate. "If you did talk to them about that, that's not what you told them to color in. He told me you went up to there and put up a map. I pulled up a map. I didn't go to Google. I went to the National Archives, and then, I also went to OAN, and it had exactly what he and I had been talking about," the parent said.

The poor teacher quietly let the woman vent her frustrations with reality as she continued to explain how she confused her child.

Biden has earned 290 Electoral College votes to Trump's 232, and the president-elect secured more than 79.3 million total votes to Trump's 73.5 million, according to the Associated Press. The news organization, which many consider far more reputable than the unnamed parent on the phone, has called every state but Georgia, where Biden is leading. The traditionally red state that Democrats successfully flipped blue has 16 Electoral College votes. So technically, the only discrepancy should be whether Biden has 290 or 306 Electoral College votes. Both scenarios put him well over the 270 electoral votes required to win the presidency. If I could leave any words for little Anthony, they would be: Respectfully disagree with your mom.

She is, however, right about one thing: Several lawsuits have been filed to challenge election results in Arizona, Georgia, Michigan, Nevada, Pennsylvania, and Wisconsin, a testament to the sore loser and the Republicans who enable him. Georgia has dismissed one lawsuit, and two have been upheld in Pennsylvania, Newsweek reported. One was also upheld in Nevada, and the rest are pending.