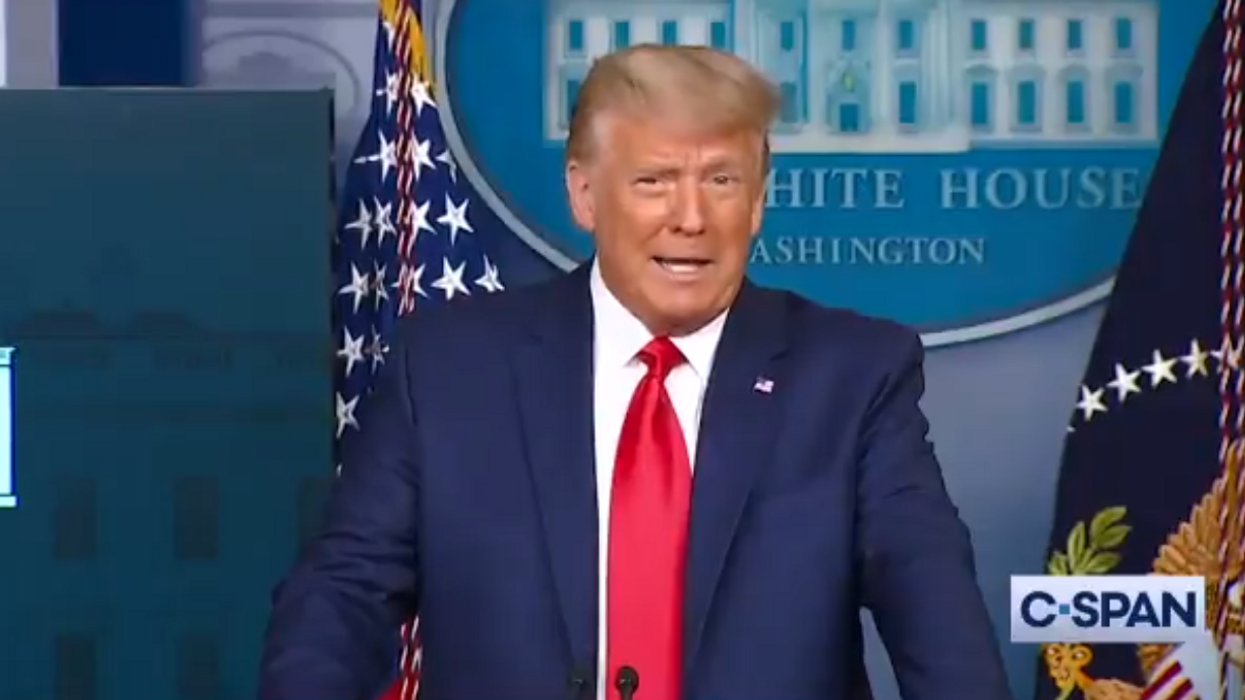 Screenshot: Twitter/CSpan
Trump to travel ‘unannounced’ to fake ‘hearing’ on election fraud — after aides failed to talk him out of it: reports
Sarah Burris
and
Raw Story
November 26, 2020

Editor and creator of The Bulwark, Charlie Sykes, told MSNBC's Joy Reid that the most "Trumpy" of things President Donald Trump could do is pardon himself ahead of leaving office in January.

After the president pardoned ret. Lt. Gen. Michael Flynn, it sparked new anticipation on how Trump will protect himself from prosecution after leaving office. Trump was alleged to have committed at least ten acts of obstruction of justice by special counsel Robert Mueller. In that case, the Justice Department followed the internal rule that sitting presidents could not be indicted. Then, it stands to reason that the Justice Department would also follow a 1974 memo from the same Office of Legal Counsel that said a president could not pardon himself.

"Under the fundamental rule that no one may be a judge in his own case, the President cannot pardon himself," said Mary C. Lawton, Acting Assistant Attorney General at the time.

With former President Richard Nixon, it was former President Gerald Ford who pardoned him. So, Trump could usher in the 25th Amendment so that for a short period, Mike Pence was the president and Pence could then pardon Trump. It's a scheme that Sykes says wouldn't surprise him.

Rep. Ted Lieu (D-CA), a former federal prosecutor, said that he doesn't think the federal courts would recognize such a pardon if Trump tried to do it.

Former federal prosecutor Glenn Kirschner noted that if Trump was ultimately prosecuted for his obstructions of justice that Flynn would have no choice but to testify in the case.

"Once you have been pardoned, your Fifth Amendment right against self-incrimination is extinguished and you can be compelled to testify about anything that otherwise might incriminate you," he explained. "So, yes, the Michael Flynns of the world could be forced to the witness stand just like Steve Bannon was forced. However, Joy, I predict he will instruct somebody to type up a part that says, 'I, Donald Trump, hereby pardon Donald Trump,' and that proves the point that we have to be prepared to fight corrupt pardons. Just like I maintain, it was a corrupt sentence commutation that he doled out to Roger Stone because Roger Stone was a coconspirator. So, the very act of delivering that sentence commutation was a criminal act in furtherance of a conspiracy to obstruct justice. So, I maintain -- I know Charlie and I might part ways a little bit -- these matters will have to be addressed by the incoming attorney general because corrupt pardons cannot be permitted to stand unchallenged."

Sykes explained that it's going to be difficult for Trump to resist issuing a pardon for himself because he faces a slate of legal problems when he gets out of office.

"But I want you to think about this for a moment," Sykes continued. "I think that it is unlawful. I think it's unconstitutional, but it will also be seen by the American people as an abuse of power and an admission of guilt. When you accept a pardon, there is the imputation of guilt. So, if Donald Trump is sitting there on his final day in office, he's got to decide, does he really want to run in 2024? Because if he does want to run for re-election in 2024 self-pardon would be a political disaster. I think that there would be a huge political backlash against it."

At the same time, because Trump is also facing state crimes in New York for tax and bank fraud, it doesn't absolve him from those concerns.

"But it would be the ultimate Trumpian moment of arrogance, narcissism, self-dealing, of putting himself above the law for him to do it, which is why it is completely conceivable that that will happen," Sykes closed.