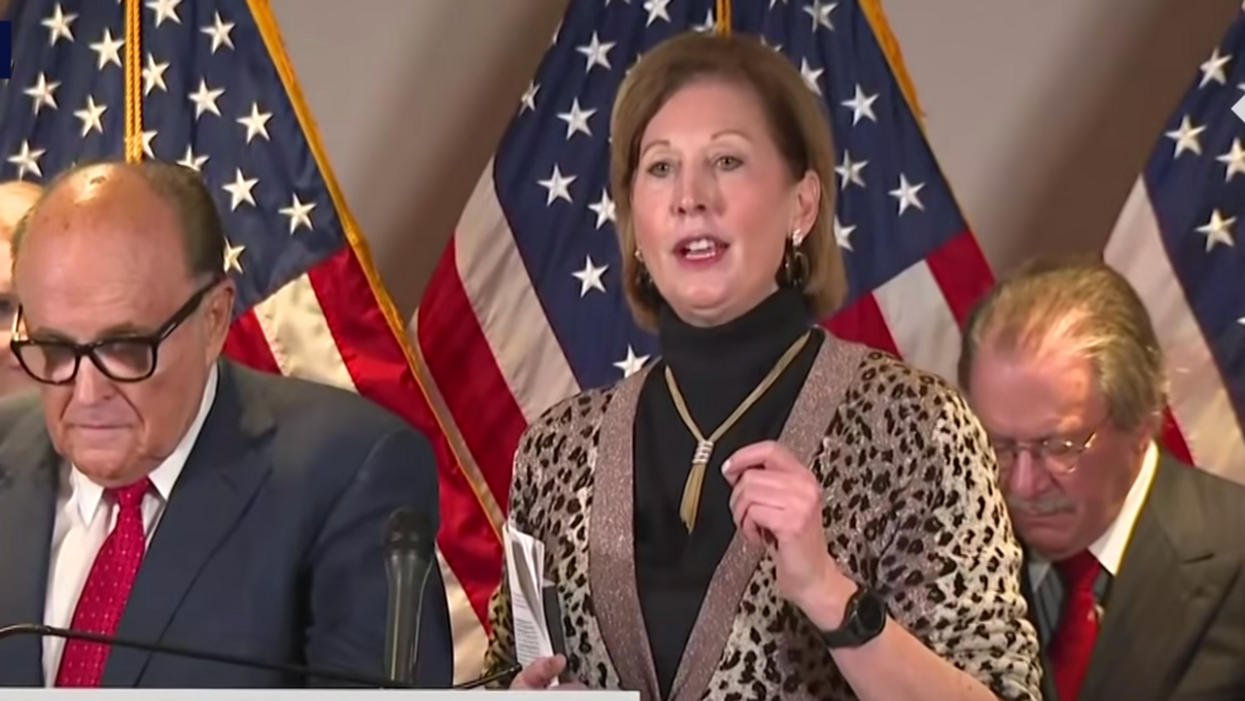 Although President Donald Trump's efforts to challenge the 2020 presidential election results have suffered defeat after defeat in the lower federal courts, that hasn't stopped Republican attorneys like Rudy Giuliani, Jenna Ellis and Sidney Powell from continuing to pursue election-related lawsuits and claiming, without evidence, that the president has been the victim of widespread voter fraud. Attorney Mike Dunford offers legal analysis of some of those lawsuits in an article for the conservative website The Bulwark, arguing that the lawsuits aren't as "dumb" as you think — they're worse.

"Every time you think you have a grasp of how preposterous the Trump team's election lawsuits are, another one comes out, dumber and more conspiracy-filled than the last," Dunford explains. "The Pennsylvania monstrosity that was submitted by Rudy Giuliani, Jenna Ellis, and the Four Seasons Total Litigation supporting cast was terrible. It made, according to a federal appeals court ruling, 'vague and conclusory' allegations about alleged misconduct, tried to get the court to do things that would violate the U.S. Constitution, and had, in the court's words, 'no merit.' Their case was such complete nonsense that two courts and four judges decided it was too dumb to fix."

Powell, in one of her lawsuits, claims that the software used by Dominion Voting Systems was used to help President-elect Joe Biden steal the election in key battleground states — and Dunford notes that one of Powell's witnesses is a QAnon conspiracy theorist.

"As specious as the legal arguments are and as incomprehensible as the copy is, the craziest thing about the case is the substance," Dunford observes. "This complaint reads like it was drafted at the afterparty for a three-day QAnon convention. And it might have been, given that one of Powell's more absurd 'witnesses' is Ronald Watkins, who, alongside his father, runs the imageboard where 'Q' drops his messages. Hmmmm. The reason Watkins is part of this case is unclear. Powell is claiming him as an expert in Dominion's voting software, but you would hope that she could find someone better — like, I don't know, someone who has worked with it maybe?"

The QAnon cult claims that that United States' federal government has been infiltrated by an international cabal of pedophiles, Satanists and cannibals and that Trump was put in the White House to fight the cabal. "Q," according to the group, is an anonymous figure who is providing updates about Trump's battle. And QAnon also claims that R&B superstar Beyoncé is really an Italian woman named Ann Marie Lastrassi and is only pretending to be Black — and that Beyoncé is acting on orders from billionaire Democrat George Soros.

Dunford, however, points out that Watkins "isn't even the strangest witness" in Powell's case. Even more bizarre, Dunford writes, is "Mystery Man Lord Tensai."

Dunford notes, "The mystery witness proclaims that he/she/it wants to 'let the world know the truth about the corruption, manipulation and lies being committed by a conspiracy of people and companies' that 'began more than a decade ago in Venezuela and has spread to countries all over the world.' Our mystery witness…. claims to have gathered the information about this conspiracy while serving on long-dead Venezuelan dictator Hugo Chavez' security detail."

Dominion, in response to Powell's claims, has stressed that its software has never been used in Venezuela.

Dunford says of Powell, "This is all batshit crazy. It is as stupid an elections lawsuit as I've ever seen. And there's no guarantee that it's the worst case we're going to see, because even though their legal arguments are being dismissed with extreme prejudice, when it comes to the political/propaganda aims of the litigants — this stuff works. Once the true believers are on board, it's hard to get them off."