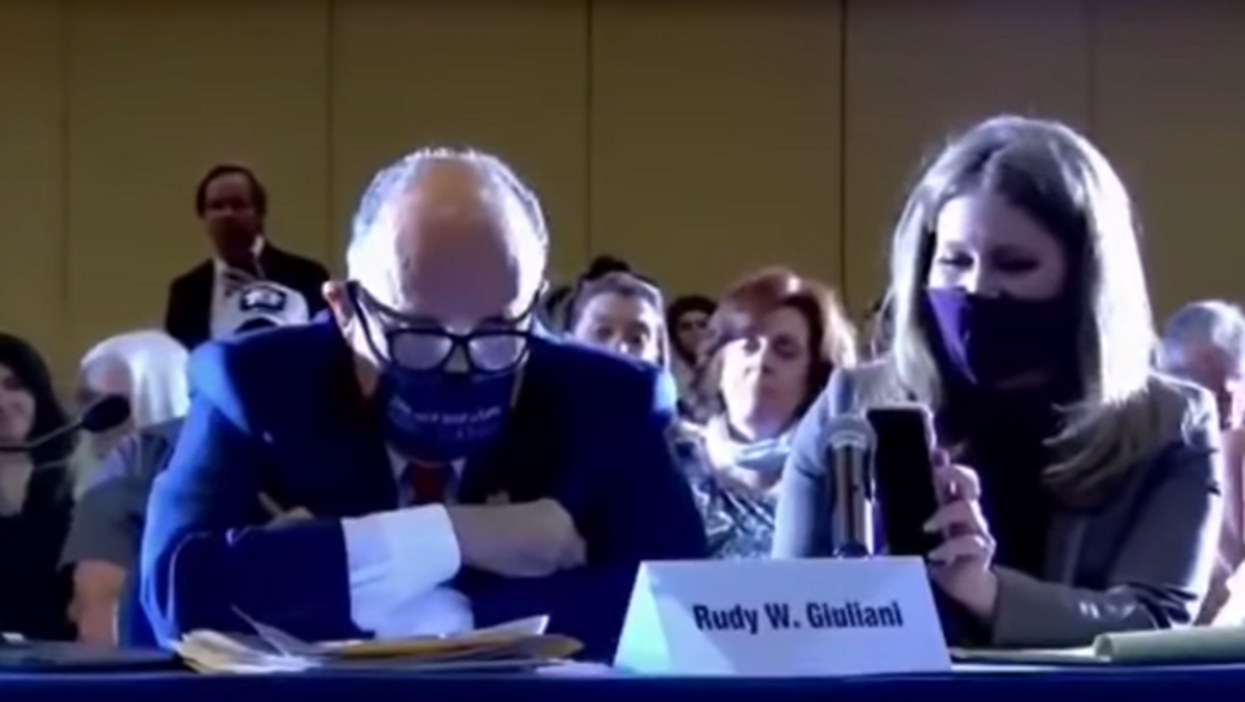 The partisan meeting, incorrectly characterized as a "hearing," between Pennsylvania Republican State Senators and members of the Trump campaign to address supposed "irregularities" in the now-certified Pennsylvania election, has now concluded. Donald Trump was scheduled to attend but backed out after yet another member of his inner circle, legal team member, investment banker and part-time propagandist Boris Ephsteyn, tested positive for COVID-19.

In front of what appeared to be a largely maskless audience tightly packed into the ballroom of the Wyndham Hotel Gettysburg, a number of witnesses, also mostly not wearing masks, spoke before an all-Republican panel of Pennsylvania State Senators, most of whom were, again, not wearing masks. None of the witnesses were placed under oath.

Rather than appearing personally, Mr. Trump dialed in to the I-Phone of one of his few remaining die-hard lawyers, Jenna Ellis. Trump repeated his assertions that the election had been "rigged," and that he had won "by a lot."

He then urged the PA. Senate Republican Majority to overturn the election results in Pennsylvania. As reported by the Daily Mail (I know, I know-- they did the work and no one else thus far seems to have had the interest):

"Why wouldn't they overturn an election? Certainly overturn it in your state,' he said in his call, which was played for an audience in Pennsylvania and carried on livestreams and on some cable channels.

As usual, Trump provided absolutely no evidence for his statements. However he did talk about things he had seen on TV that day.

He said a 'big energy official was on this morning on an important show' who 'said there's no way trump didn't win Pennsylvania because the energy industry was all for him.

Trump also channeled his inner mob boss by expressing faith in our judicial system to overturn the election: "All we need is to have some judge listen to it properly," he said.

Jenna Ellis, Trump's lawyer, then verbally urged PA's Republican Senators to overturn the election by sending their own slate of Electors to vote for Trump.

Objectively speaking, the "meeting" featured little more than a parade of charlatans and aggrieved, whining, sometimes misguided partisans and Trump sycophants from Pennsylvania, none of whom provided any direct evidence of fraud in the 2020 election.

One witness, Phil Waldron, a retired colonel, got introduced as a statistician, but had to clarify that he wasn't.
'I am not a statistician. I'm a combat officer and didn't do well in math,' he said.

There were hearsay statements about the purportedly rude or obstructive conduct of (implicitly Black) poll workers in Philadelphia (no names were supplied), and several complaints about the fact that Republican poll watchers were not permitted to closely observe the tabulation of ballots. There were plenty of conspiracy-mongering allusions to the "hackability" of the vote tabulations, but seemingly no evidence of actual hacking.

What was noticeably missing from the testimony was any direct evidence that they received treatment markedly different than Democratic poll watchers in this regard, or that the treatment they were afforded did not accord with any treatment they would have received in any other election. Pennsylvania has fairly strict guidelines on conduct that could be construed as harassment or intimidation of poll workers. But more importantly, again, there was no assertion that could point to any concrete instances fraud or deception on the part of the Commonwealth's intrepid and beleaguered election workers, many of whom were volunteers.

Kim Peterson, a Pittsburgh poll watcher, also complained about the distance. 'We were kept in a corral that was at least 15 to 20 feet from any of the representatives,' she said.

Without belaboring the issue, if you are within fifteen feet of a person engaged in a task involving concentration, come any closer and you are likely disturbing their work, particularly if you are intrusively staring over their shoulder.

The "meeting" reached no formal "conclusion," except a rabid and self-serving soliloquy by wingnut Pa state senator Doug Mastriano, vowing to "take our state back," to the thunderous (not really, but I couldn't resist the Star Wars allusion) applause of all present.

The real disgrace here was not the parade of disgruntled Republicans, vehemently mouthing their baseless grievances, or even the fact that few of these people cared enough about their own or others' health to maintain appropriate distancing or wear mask protection.

The real disgrace is that an elected body of officials felt compelled to give this seditious, farcical and corrosive circus a platform at all.

The entire meeting is available now on C-span.