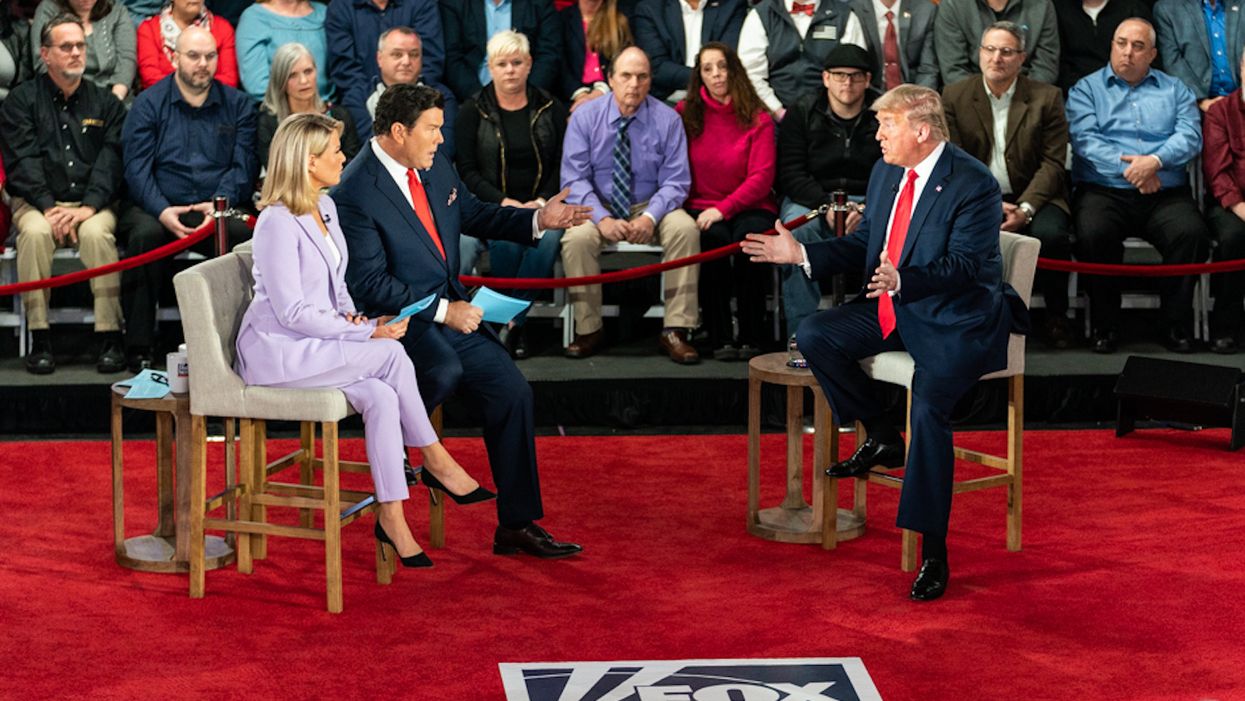 Photo via the White House.
Hunter
and
Daily Kos
November 29, 2020

The notion of Donald Trump "creating" a new "news network," as his allies keep vaguely threatening, is a pipe dream. It's not going to happen. It would require enormous amounts of money he doesn't have, and it would require work. If the so-called Trump administration has taught us anything, it is that Donald Trump cannot stand doing work. He likes people praising him, and he likes golf. Time spent reading, or planning, or attending meetings is time not being spent polishing his boots or his golf clubs, and does not happen. Trump has shown obsessive interest in exactly one subject outside of himself, and that is interior decorating. The man has opinions on drapes and what color they should be; if he were to head up a network on anything, it would be a network featuring Donald Trump's Home Decorating Tips.

And given that every episode of every show would consist solely of Donald telling someone to paint something gold, the viewership might be a bit ... limited.

That said, it does seem to be true that wealthy Trump-adjacent conservatives are scoping out the creation of a new conservative news network to challenge Fox. The stories are always the same: Donald Trump's enablers and supporters are outraged, positively outraged, by Fox News slip-ups in which cold, hard reality manages to make it to airwaves. They didn't become Donald Trump supporters to hear about the effectiveness of masks, or come face-to-face with Electoral College numbers that suggest Dear Leader is not, in fact, going to be able to continue Dear Leadering much longer.

The Wall Street Journal brings us the latest entry in the saga, a piece reporting that a Trump-supporting actual rich dude's private equity firm had been probing whether to acquire pro-Trump outfit "Newsmax TV," the video version of one of the more notorious conspiracy websites on the conservative internets. This comes after Rich Dude Company had previously set its sights on the absolutely batshit insane conspiracy network OANN, a QAnon-level den of crackpottism that has seen heavy promotion by Trump during the periods when Trump is angriest at Fox News for the aforementioned slip-ups.

This doesn't have anything in particular to do with Trump, mind you. This is a conservative project that just happens to be spearheaded by the sort of people that admire Donald Trump and Donald Trump's own devotion to propaganda, and they want themselves a taste.

Again: A Donald Trump news network? Not going to happen. An archconservative conspiracy network that Donald Trump licenses his name to, as if the news were a mail-order steak? Mayb—yeah, no. He would demand a fortune, and any new startup looking to compete with Fox News is not going to be so well-funded as to be able to afford Donald's special brand of cash-siphoning.

What the continued murmurs around a new "conservative" Fox competitor suggests, though, is that wealthy conservatives have learned at least one big lesson from the Trump era, and they are very eager to capitalize on it. Donald Trump's campaign, administration, reelection bid and subsequent whine-fest have proven, conclusively, that there is a massive American market for straight-up propaganda. Literal fake news.

Conservatives are now angry enough at the normal, everyday wounds inflicted by life and the news cycle that they are all but demanding to be given hoaxes instead. This isn't the bending of reality that Fox News hosts eased audiences into over two decades, with its inside language and large classroom-borrowed chalkboards describing tenuous-to-imaginary links between designated enemies; what Trump, his parade of press secretaries, spokescreatures, Cabinet members and hangers-on proved was that even government figures could lie, brazenly and outright, and allied conservatives would not just accept it but eagerly celebrate it. It is now something akin to a cult, in which all involved likely know the difference between truth and fiction, but insist on adhering to the fictional versions out of sheer spite.

To you and I, this sounds like a problem. To a wealthy media conservative, this is the stuff that makes eyeballs turn to dollar signs. The Americans who gathered themselves around Trump, as movement, are self-selected to be the most gullible—willingly gullible!—people in the nation. These are the people Breitbart, Tucker Carlson, Glenn Beck, Alex Jones, and other conservative linchpins have turned into steady paychecks, and who still come back for more.

These people are not poor. These people are obsessively sectarian, and make decisions not just over products, but over which dimension they choose to inhabit, based on who waves the proper flag and how shamelessly they do it.

These conservatives are an advertiser's dream audience, and absolutely everybody in conservative media wants a piece of them.

One of the more defining features of conservative media is, ahem, the advertising that is invariably attached to it. Reading a far-conservative website or listening to a far-right host inevitably means being exposed to a barrage of specifically conspiracy-minded products sold with the language of a hundred doomsdays to come. Buy gold, yes, but also this survival food or this protein shake concoction. Purchase "tactical" flashlights, or an array of other products all themed around something-something-guns. It all inevitably decays into being added to mailing lists in which the names of top conservative hosts are attached to the seediest, scummiest-seeming products one can imagine.

Short version: Conservatism has carefully bred itself into a movement that will believe anything and everything, and while that may be a disaster for the country, to conservative advertisers this is truly a new golden age. You can do anything and these people will still latch on to you.

Forget the controversy about wearing masks or not wearing masks during a deadly nationwide pandemic. The reason wealthy conservatives are rushing to create a new, even farther-right version of Fox News is because Trump discovered an audience of Americans who would eagerly let you harvest their kidneys if you told them it was to defeat "antifa."

American flags? We've sold the hell out of American flags, everyone now has six of them. But now there's a new American flag, and it's blue, or it's yellow, or it has Trump's orange mug painted onto it. You're not a real conservative unless you buy twelve of those too.

For certain, there is an obsession in the far-right with creating the next Fox News. But it's not about patriotism. It's not even about conservatism. It's about good old-fashioned profit. It's about finding the motherlode of American gullibles, people who will buy anything, and selling it to them.

That's why Rich Guy Equity Group has been combing the land looking for entry points into the land of Conservative Conspiracy Television. It's not because the man or like-minded allies are just that devoted to Donald Trump. Donald could be eaten by a Florida gator on the back nine next week and the "movement" would no more tap the brakes than they did when famous Important Conservative Herman Cain died of the pandemic illness he and his band of merry grifters had insisted was little more than a conspiracy against them.

In this new version, conservative media is not about ideology. It can't be—not when the ideology shifts from week to week in accordance with whatever new thing must now be held up as enemy. What Newsmax TV or OANN offers is a news "casino" promising mega-jackpots that never appear to audiences primed to empty their pockets.

The new conservative media is about selling a screaming adrenaline rush so cathartic that you need a special pillow afterward to sleep right. It's an expensive pillow, by God, but it's the only one left not infested with "antifa."

You can't put a price on that.