Trump's faux-populist mask has been torn off 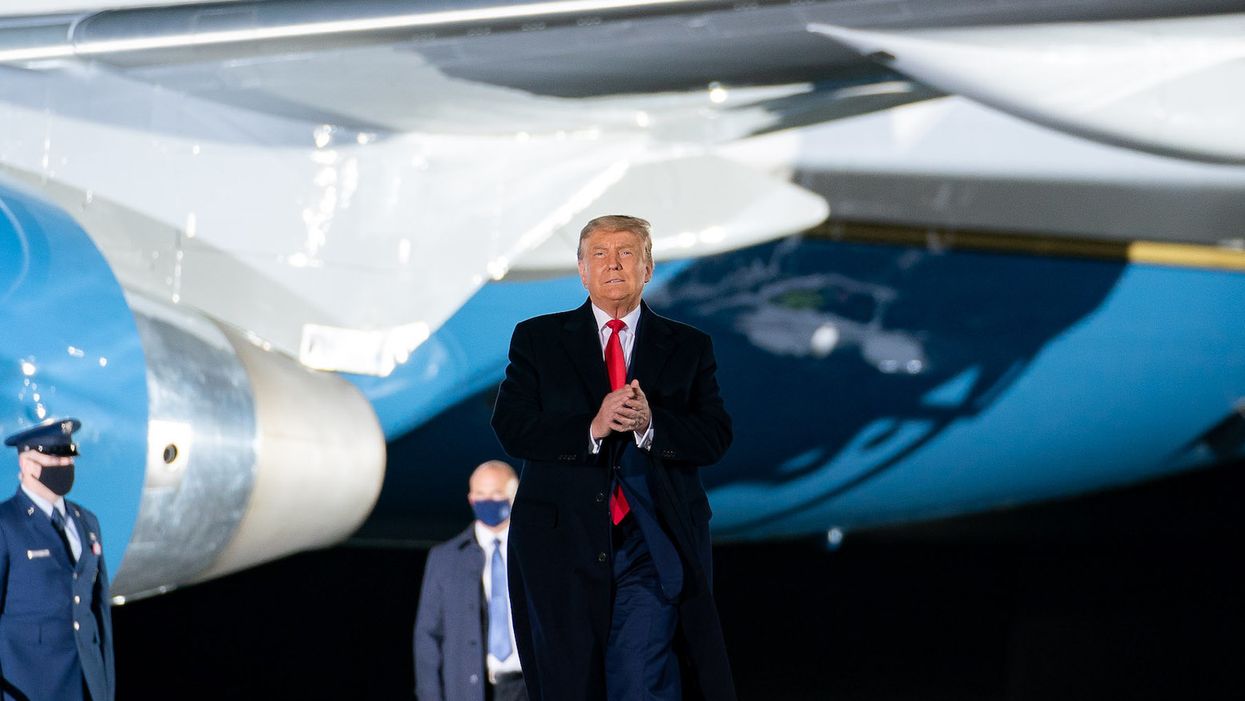 Despite his relentless claims of being a "pro-worker" president, Donald Trump has in fact gutted worker safety and health protections and refused to enforce rules to keep workers safe amid a deadly pandemic that has killed more than 230,000 Americans and infected thousands of supposedly "essential" workers.

The facts show that OSHA (the Occupational Safety and Health Administration, tasked with protecting job safety) has plunged to its lowest enforcement and staffing levels in the agency's half-century history.Trump's OSHA sports a woefully anemic force of just 750 federal inspectors for the entire country (1,815 total when you include state inspectors)—meaning it would take an astounding 165 years for them to inspect every American workplace, an all-time high, according to a report by the AFL-CIO. That's one safety inspector for every 79,262 workers.

According to Government Executive, "The drop in inspectors coincided with an expansion of workplaces to protect, from 4.5 million in 1980 to more than 8.1 million today. That means that there were 3,063 workplaces for each OSHA inspector in 1980, compared to 9,286 today, more than a 200% increase." Under Trump, workers have about the same shot at winning the lottery as they do at getting their legally mandated job safety protections.

Trump's anti-worker, pro-corporate agenda provides a direct reality check on the myth that the career businessman is any kind of "populist." Consider just a few of his many anti-worker policies:

Even as the coronavirus rages on, killing and hospitalizing thousands of workers, Trump's OSHA and Department of Labor have vigorously opposed an emergency standard that would empower the agency and workers to enforce safety protections, my reporting for The Progressive found. They've even battled in court to prevent an enforceable standard, repelling (so far) a lawsuit from the AFL-CIO and pressure from Congress.

"Many lives could be saved if OSHA took action," Representative Scott, chair of the House Committee on Education and Labor, told The Progressive. "OSHA has effectively taken no enforceable action." Even now, ten months into the pandemic, "There is presently no enforceable regulation to protect workers from airborne infectious diseases."

Making matters worse is an OSHA enforcement memo issued in April that gives inspectors "Discretion in Enforcement when Considering an Employer's Good Faith Efforts During the Coronavirus Disease 2019 (COVID-19) Pandemic." This little-reported memo states, "Where an employer has made attempts to comply in good faith, Area Offices shall take such efforts into strong consideration in determining whether to cite a violation." States have adopted this same approach, following federal OSHA's guidance. The message to business and workers couldn't be clearer: on job safety, even in a pandemic, nobody's minding the store under Trump.

Despite thousands of job safety complaints from workers, OSHA has only issued a handful of citations. During a deadly pandemic, with thousands of workers filing complaints of dangerous conditions, Trump's OSHA—the nation's top cop for job safety—cited only one company over the first five months, and only a few more since then. Recently, under scrutiny and pressure, OSHA has cited an Ohio healthcare company for three "serious" violations, and giant meatpacking corporation Smithfield Foods, with a pathetic proposed fine of $13,494 for "general duty clause" violations of failing to provide a safe working environment. Through September, OSHA had recorded 8,645 complaints of unsafe workplaces, and had closed 7,920 of those cases.

In House hearings, Rep. Alma Adams, D-N.C., chairwoman of the Subcommittee on Workforce Protections, concluded, "in the middle of this global health emergency that is causing more deaths in less time than any other workplace crisis that OSHA has faced in its 50-year existence, OSHA stubbornly refuses to use its authority to protect this nation's workers. This failure to act is a stunning act of abdication by the senior leaders in the Department of Labor."

After four years, despite all Trump's rhetoric about being a pro-worker "populist," all the facts show the opposite. No matter what he says, the evidence is thunderously clear: Trump is arguably the most (perhaps tied with Reagan) anti-worker, anti-labor president in modern history.

Workers in Michigan, Ohio, Pennsylvania, Wisconsin, and across America now have the chance to reject a president who has in fact thoroughly abandoned and rejected them at every turn. Workers have a chance to elect a Biden administration that will push for a $15 minimum wage, while Trump opposes raising the federal minimum, which sits stagnant at an insane and unlivable $7.25 an hour.

America's workers have a chance to vote for a Biden administration that will, at minimum, restore and expand worker safety and workers' rights, and enable unions to organize. America's workers have a chance, right now, with this vote, to elect a Biden administration that has proposed creating millions of jobs to expand renewable energy and other vital science-driven actions to address our climate crisis. They can elect a president who creates living-wage jobs to manufacture essential personal protective equipment, helping our ailing economy and health.

On November 3, America's workers can reject a silver-spoon fake millionaire and tax cheat who, at every turn, has acted only to enrich the rich while screwing over workers and poor people. That is the Trump record. Don't fall for Trump's "pro-worker" hype and myth: he's the anti-worker president, from beginning to end.

Christopher D. Cook is an award-winning journalist and author of Diet for a Dead Planet: Big Business and the Coming Food Crisis. Cook has written for Harper's, The Economist, Mother Jones, The Christian Science Monitor and elsewhere. See more of his work at www.christopherdcook.com.