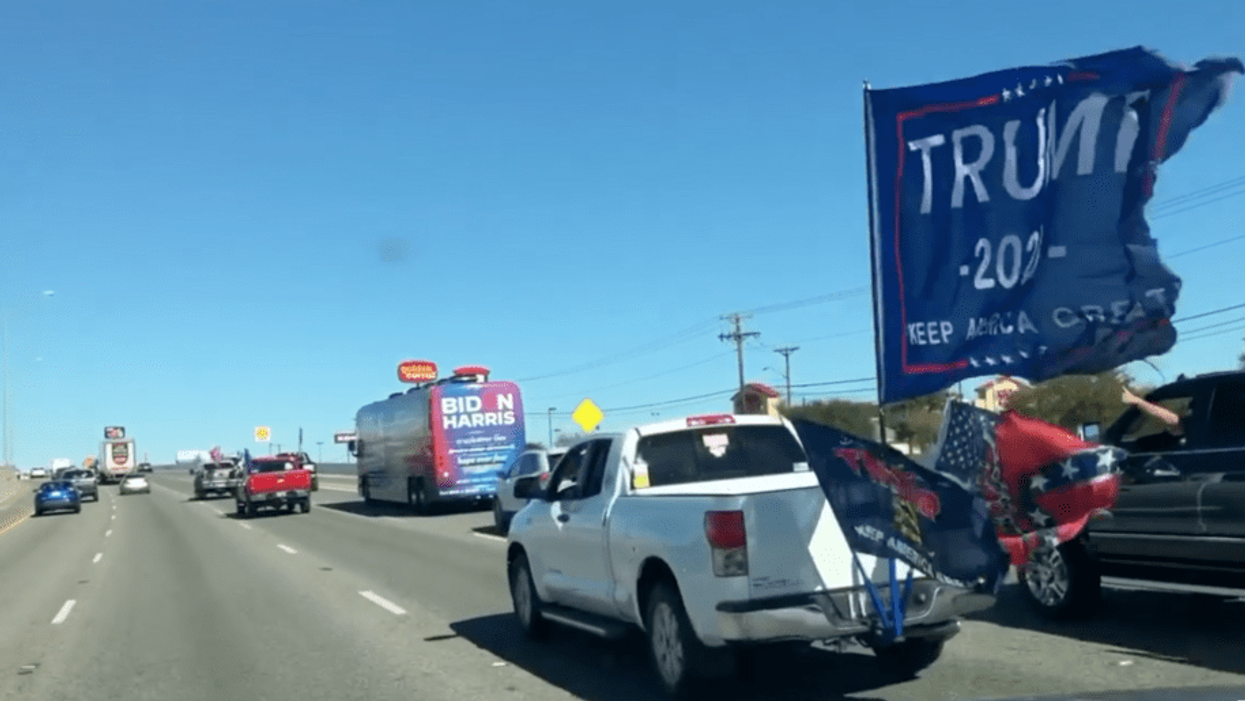 A caravan of Donald Trump supporters driving dozens of mostly banner-festooned pickup trucks and SUVs deliberately ambushed a Biden-Harris campaign bus traveling to Austin and other parts of Texas on Friday, harassing them constantly en route, forcing Democrats to cancel at least two campaign events out of concern for public safety. The participants, however, all proudly boasted about the harassment on social media, and police made no arrests.

Videos show the pro-Trump vehicles surrounded the bus on the freeway and slowed its progress, as passengers and drivers shouted obscenities and various epithets; one witness claimed many of them were armed. At one point, a pickup driver veered into a campaign staff vehicle following the bus and smashed its fender, forcing it into another lane.

Neither Joe Biden nor Kamala Harris were aboard the bus, which was traveling from San Antonio to Austin on Interstate 35. Among the passengers on board were Wendy Davis, a Democrat running in the 21st Congressional District against incumbent Republican Chip Roy; Democratic Congressman Rep. Lloyd Doggett, who represents District 35; and Roland Gutierrez, a candidate for Texas senate District 19.

The bus was part of a late Texas push for the Biden campaign, which organized several events in the state as part of a "Battle for the Soul of the Nation" tour featuring various Democratic candidates appearing with Harris. The pro-Trump vehicles, dubbed the "Trump Train," surrounded it as it passed near New Braunfels en route to Austin, and remained with it until San Marcos, 20 miles down the road.

Videos showed the vehicles lined up along the freeway in wait for the bus, then speeding up and surrounding it as pro-Trump onlookers cheered and laughed. According to people on the bus, the vehicles slowed and appeared to attempt stopping the bus altogether.

One of the caravan's Facebook organizers, Randi Ceh, posted video on her Facebook page claiming the staff car following the bus closely was breaking the law—and when a large pickup veered and hit it on the side fender, claimed that it was the staff car driver attempting to cause an accident.

A campaign staffer told The Daily Beast that the Trump supporters appeared to be trying to force the bus off the road. Police were called from the bus, and they reportedly helped the driver reach Austin safely.

Once in Austin, however, a crowd of Trump supporters surrounded the bus and continued the harassment. Fearing the threats would escalate, Democrats canceled the event.

Nor was that the only canceled event. The Biden bus had also been scheduled to make a stop in Pflugerville to campaign with Texas House Representative Sheryl Cole, who was waiting there. Cole tweeted that the Biden bus also had to cancel due to security reasons.

"Pro-Trump Protesters have escalated well beyond safe limits," she posted.

The Trump truck caravans have increasingly proved to be not just a prime environment for violent rhetoric and threatening behavior organized on behalf of the Republican president, but as occurred in Oregon earlier this summer, a prime vector for blurring the lines between far-right extremists such as the Proud Boys and ostensibly mainstream Republicans.

Locals in New Braunfels voiced their anger with the Trump Train organizers, who have been creating the caravans as regular demonstrations since this summer. Gloria Meehan, Comal County Democratic Party chair, told MyCanyonLake.com that the activists were destroying the area's reputation.

"Frankly, I feel sorry for those involved with the Trump Train that they have nothing worthwhile to do, but drive around aimlessly, harassing and intimidating," Meehan said. "Why? Nothing good comes of idleness and bad intentions. They're rudderless, adrift, lost in a sea of discontent. It's unsustainable, and behavior like this strikes at the heart of our community and is driving our economy into the ground as folks no longer feel safe coming to New Braunfels and will take their tourist dollars elsewhere. The word is Comal County, for all its beauty, is dangerous and unwelcoming."