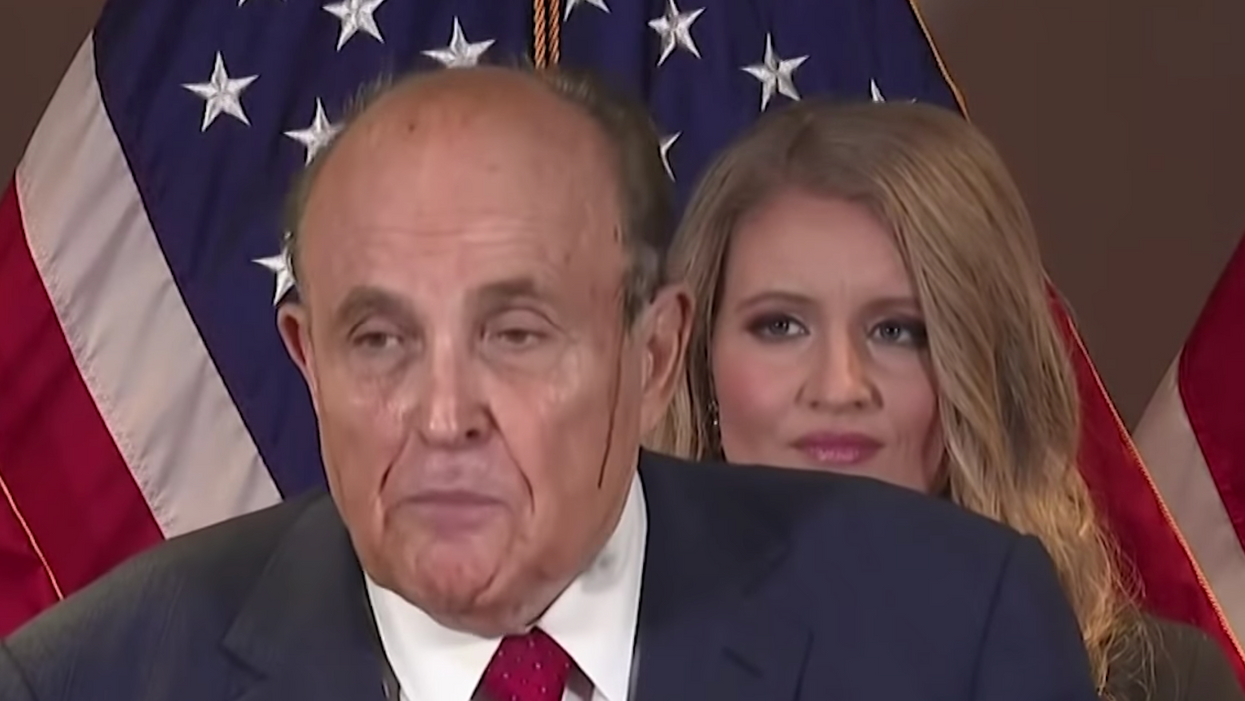 At high noon on Thursday, Donald Trump's crack legal team sauntered out for a showdown with destiny. They were there to demonstrate for America that Trump's refusal to concede the election wasn't a demonstration of infantile refusal to accept reality, but was really real. Really real. Oh, so real.

And in their presentation on why the press should never again say they were lacking evidence, what emerged before their own tech team appeared to pull the plug was a claim that Democrats engaged in a vast conspiracy to "inject" hundreds of thousands of Biden votes by using voting machines built by Venezuelan dictator Hugo Chavez, with the help of wealthy Jew George Soros, that sent American votes overseas to servers in Germany where they could be altered according to orders from antifa. And then, when even that proved inadequate to defeat Trump, Democrats brought in "garbage cans" full of votes that were marked for Biden. Then counted them three times each. That may sound like an exaggeration. It's not. It's only a subset of the claims that were made during this peek into an alternative reality. Also Rudy Giuliani's hair dye began pouring off his head at a rate that made it look as if his brain might be leaking from his skull. Which seemed entirely possible.

Giuliani took the stage first to begin the general theme of the day, which was to berate the press for saying that there was no evidence of voter fraud when he had a fistful of affidavits. Affidavits, people! For example, Giuliani claimed to have "60 witnesses" to an incident in which a truck pulled up in the wee hours of the morning "and people rushed to it thinking it had food" but instead it was "full of ballots, thousands of ballots" that were in garbage cans and paper bags. And then these votes were brought in "when they thought all the Republican observers had gone home" and run through the voting machines three times. This was not a single event, declared Giuliani, but a product of Joe Biden's "election fraud team" that worked in "Democrat led cities" to plant the votes needed to put Biden ahead of Trump.

Giuliani then gave way to Sidney Powell, who demonstrated that when it comes to being disconnected from reality, this conference went to 12. Powell immediately veered away from trash can votes and right into how the election was really rigged by voting software written for Venezuelan dictator Hugo Chavez. Chavez, rather unexpectedly, is apparently very anti-Trump. (That's really unexpected since he died in 2013.) But Powell launched into an emotional explanation of how "Our votes are counted in Germany and in Spain by a company owned by affiliates of Chavez and Maduro," and these companies are, of course, run by "the number two associate of George Soros." As Powell went on, she also expressed how Cuba was involved, and how there was an "algorithm" that allowed this Venezuela-Jewish-Cuban cabal to define the values of votes. That algorithm that "probably flipped votes all over the country" because, according to Powell, "Donald Trump won in a landslide."

Yes, she said that. This came right before the part where she explained that she also has an affidavit from someone who chatted about all this with Chavez (I am still not making this up) and that it was all approved by antifa. It was a Biden-Venezuelan-Jewish-Cuban-antifa conspiracy. And if you think she didn't mention the Clinton Foundation in this … oh yes she did. All of these groups "had the election rigged for Mr. Biden," said Powell. She went on to explain: "They can say a Biden vote counts 1.25 and a Trump vote counts 0.75, and that may be the numbers that were used here." All of this was explained to her by the Chavez chat man. Also, there is a server in Germany that is definitely connected. Though we don't know how. So … just assume everyone not standing on the stage was a part of the conspiracy.

Powell then gave way to Jenna Ellis, who explained that, lord help everyone, all that had gone before was only the "opening statement" to the full trial they wanted to have. Ellis then explained that this would not be a trial of the public opinion before complaining that there wasn't time to do it in court. But definitely, definitely, 99% of the press wasn't worthy to even report on the story. Because they're part of the conspiracy.

The whole thing finished off with some Q&A time in which Giuliani stepped forward to embrace everything that Powell had claimed about Chavez, Soros, antifa … the works. That included complaining about states being "stupid enough to send our votes out of the country ... to be counted by people who are allies of Chavez and Meduro ... run by an ally of George Soros." He knows this is a fact, said Giuliani. "When I first heard it, I didn't believe it, until Sydney showed me the documents ... you can Google it, well, unless they took it down." This was accompanied by more complaints about antifa's role in fixing the election.

And you know all of this has to be true, because Giuliani gestured around the stage to proclaim, "There is nobody here who engages in fantasies." This was followed by a claim that Trump won Michigan by 50,000 votes, and that the campaign was looking into challenges in both Virginia and New Mexico. By that point, Giuliani's hair dye was largely on his shirt.

All this happened. And I didn't even touch on the most ridiculous moments.