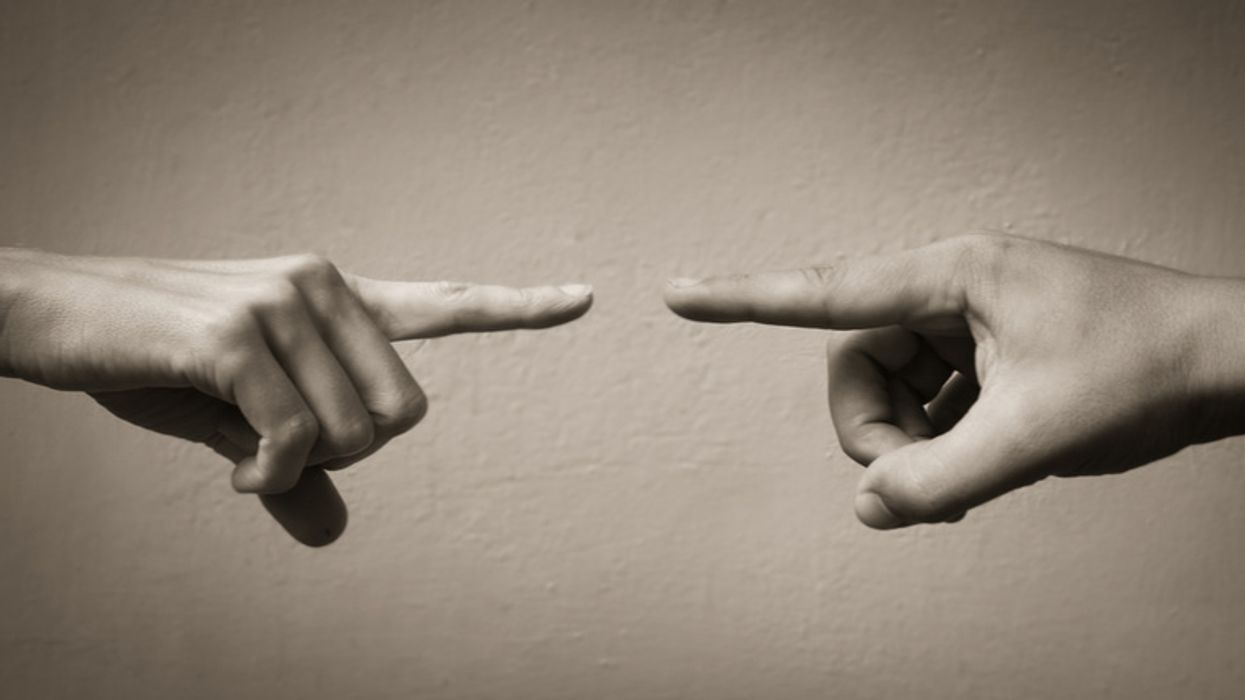 Hands pointing fingeers at each other.

As of this writing, Joe Biden appears to be on track to become the 46th President of the United States, but the resounding rejection of Trump and Trumpism that many had hoped for didn't materialize. The Democrats underperformed expectations even more in down-ballot races.

Even in victory, one of the most predictable outcomes has come to pass: the fragile unity that held together the factions of the Democratic coalition for the past year has been broken. The left is blaming Democrats for nominating a moderate, for their messaging and their ground game. They claim that the party moved to the right to appeal to disaffected Republicans that ultimately proved ephemeral at the cost of revving up their base. Moderates blame the left for identifying as socialists--arguing that it hurt the party among Florida Hispanics--for mocking the "wine moms" of "the resistance" and echoing conservative narratives that paint the Democrats as a party of out-of-touch elitists who have abandoned the working class. Both camps have other grievances as well.

While there may be a kernel of truth to some of these arguments, I don't want to engage in that debate now because it just elides our real problems.

The first is the Electoral College and a malapportioned Senate. We have known with near-certainty since the beginning of this race that Joe Biden would win millions of more votes than Donald Trump, and that has come to pass. The Senate is still technically in play, but the most likely result will be that Democrats fall a seat or two short of making Mitch McConnell Minority leader. And those Democratic Senators in the minority will have won millions of more votes than the Republican Senate caucus.

But the more serious problem for centrists, liberals and the left is the right's sprawling disinformation complex. Fox News, America's top-rated cable network, is the jewel of the crown, but Sinclair Broadcasting dominates local TV markets, OANN and conservative talk-radio is even more unhinged and right-wing websites proliferate like mushrooms after a rainfall. Facebook's gameable algorithms result in Ben Shapiro, Dan Bongino and other far-right talking-heads having the most widely-shared content on the platform almost every day.

Racism and partisanship are a helluva drug, but those who get their information from these sources are also fed an alternative view of reality day in and day out. As a result, tens of millions of Americans (mostly white Americans) believe that hordes of antifa are burning down American cities on behalf of a Democratic Party that advocates Venezuela-style socialism (even when they nominate a well-known moderate like Joe Biden), abortion on demand until moments before birth and wants to repeal the Second Amendment and abolish Christmas. They think the center-left Democrats want to tax them to death--working people, not the wealthy--regulate businesses out of existence and criminalize non-conformity. During elections, they disseminate a gusher of outrageous lies and doctored images and videos too voluminous for fact-checkers to even hope to keep up with.

I have long advocated for the Democratic Party to move left because I believe that progressive policies deliver material benefits to working people, but I have no illusions that embracing a superior agenda--whether that means tacking to the left or to the center--or simply honing their messages can overcome this.

It is difficult to see a solution. Everything but fighting words is protected speech. There is a lot more progressive media infrastructure today than when I got into this business a couple of years after the 2000 election, but a massive asymmetry remains. Conservatives, convinced that the legacy media are hopelessly biased against them, have invested untold dollars in media over several decades.

We can get some satisfaction at pointing fingers at each other--and intra-coalition debates are certainly necessary--but the real barriers to progress aren't a creation of either moderates or the left.