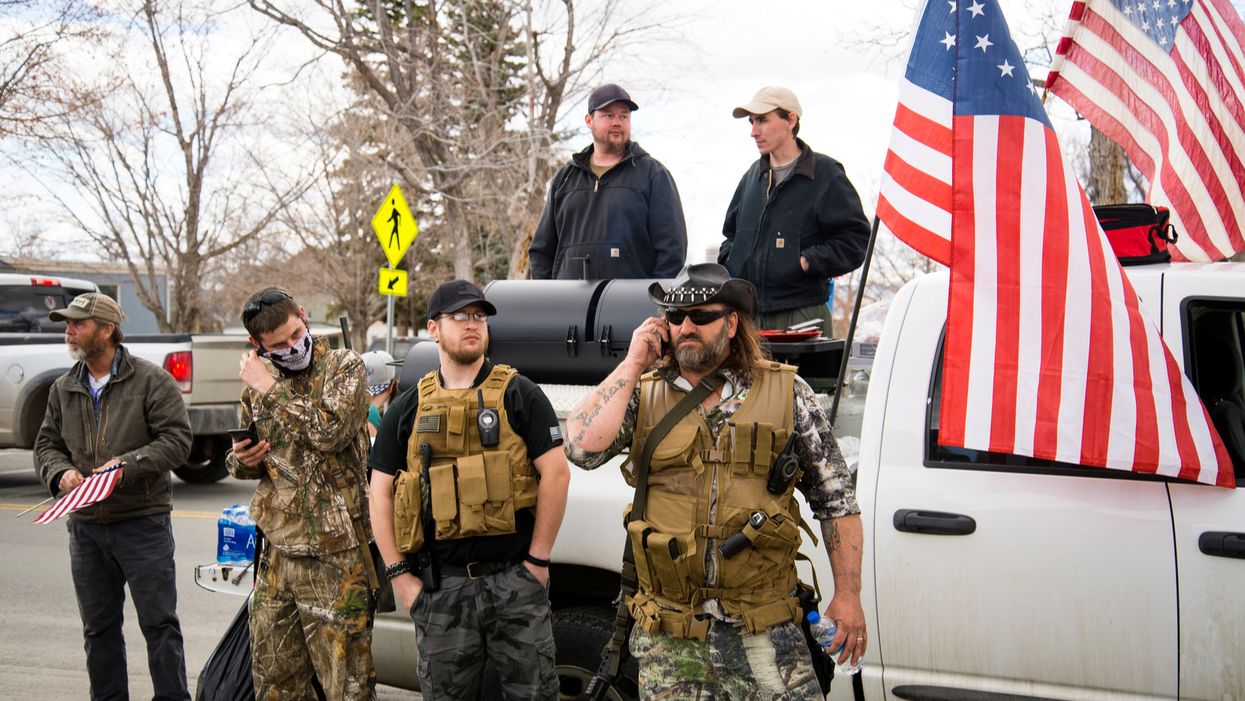 Philadelphia's Democratic district attorney Larry Krasner is warning armed, so-called "poll watchers" to stay away from the city's voting precincts unless they want to find themselves explaining to a jury why they "thought it was okay to come to Philly and steal our votes."

"If you want to dress up like a G.I. Joe and claim you are protecting the polls when we all know what you're really doing is intimidating voters," Krasner told CNN on Friday, "you're getting locked up."

"Wannabe fascists stay home," he added. "If your idea of how to have a democratic election is to steal it, then I've got something for you. I've got a jail cell, and I've got criminal charges."

Krasner's fierce condemnation of potential voter intimidation in Philadelphia—described by the DA as not only the biggest city in one of the most important battleground states in the country but also "the birthplace of American democracy"—preceded a press conference on Monday, during which he explained the steps that an election task force made up of more than 90 city prosecutors and detectives are taking to ensure that Philadelphians are able to cast ballots without fear on Tuesday.

"I want Philly voters to be assured that we are all working together to make sure you have a clean and fair Election Day" Krasner said Monday. "I do not expect any threats or harassment tomorrow, but let me be clear: Anyone intending to steal Philadelphians' votes by breaking the law to disrupt a fair and free election could find themselves in a jail cell, facing criminal charges and a Philadelphia jury wondering why you thought it was okay to steal their votes."

As the New York Times reported on Sunday, "many jurisdictions have sought to educate both the public and law enforcement of what is permissible at the polls," a task that has taken on heightened importance due to President Donald Trump's repeated incitement of political intimidation and violence that has prompted dozens of historians of authoritarianism to warn about the existential threats facing democracy.

According to the Times, Krasner "issued a six-page memo on the law to the police, noting for example that anyone can face five years in jail for a misdemeanor if they 'unlawfully strike, wound, or commit an assault and battery upon the person of any elector' in or near a polling place."

Whereas Philadelphia normally deploys a task force of 60 prosecutors and detectives to safeguard presidential contests, Krasner activated this year's beefed-up, 90-plus person task force on October 7, much earlier than usual.

Citing the "historic and unprecedented nature of the 2020 election" and warning "against armed militias and violence," Krasner vowed last month that the DA's Office would "work alongside the city commissioners and our partners in law enforcement, government, and community to ensure that no Philadelphian is intimidated, misled, threatened, or harmed as they cast their ballot."

Krasner denounced "voter suppression efforts" being encouraged by the president, saying that "brandishing a firearm in an attempt to menace voters or election workers... is dangerous and anti-American behavior, and it will be prosecuted by my office."

Last week, Krasner told Trump to "keep your Proud Boys, goon squads, and uncertified 'poll watchers' out of our city."

"The Trump administration's efforts to suppress votes amid a global pandemic fueled by their disregard for human life," Krasner said, "will not be tolerated."

"Philadelphians from a diversity of political opinions believe strongly in the rule of law, in fair and free elections, and in a democratic system of government," he added. "We will not be cowed or ruled by a lawless, power-hungry despot."

Krasner's comments on Monday echoed those he made last month, when the DA said that "anyone who comes to the cradle of American democracy to suppress the vote, and violates the law and commits crimes, is going to find themselves in a jail cell talking to a Philadelphia jury."