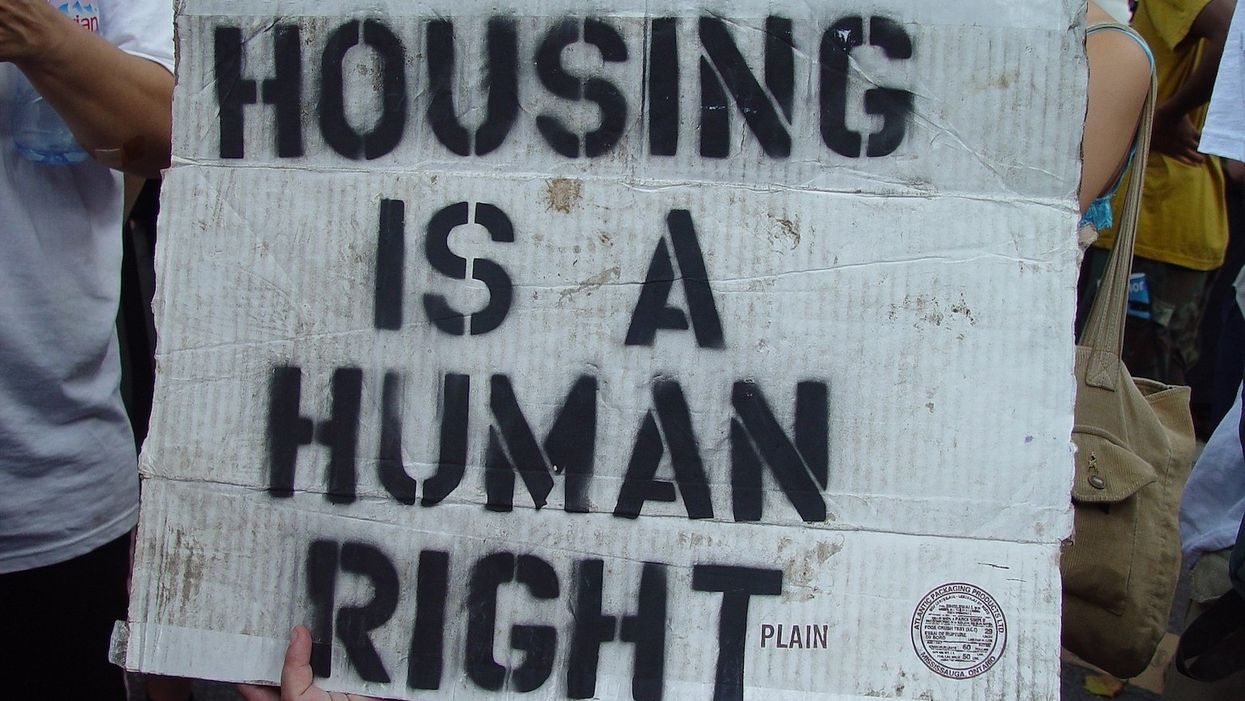 Months of protests led by homeless residents over the lack of affordable housing in Philadelphia have led the city and the Philadelphia Housing Authority (PHA) to agree to cede 50 vacant homes to a public land trust. The land trust will be managed by Philadelphia Housing Action, which is a nonprofit formed by homeless encampment organizers. The agreement is largely "unprecedented" and marks the first time a transfer of power and property ownership rights of this scope—from the city and PHA to protesters occupying an encampment—has taken place in the United States.

The new land trust designates 50 "properties for use as low-income housing, defined as $25,000 and below, and they would be controlled [and managed] by local committees," PhillyVoice reports.

Philadelphia is dotted with empty, abandoned houses that have sat vacant for years, and in some cases decades, explains protest organizer Nadera Hood. Meanwhile, at least 5,700 Philadelphia residents are homeless. Many of the city's homeless residents are working families with children who find themselves unable to afford the city's increasing rents, Hood says. The city and PHA have been breaking up homeless encampments that have been called "untenable" by Philadelphia Mayor Jim Kenney and other leaders in the city. However, for many residents, the encampments offer the only living space that feels safe, as overcrowded shelters have led to COVID outbreaks and deaths of homeless residents living in shelters.

Talking about the agreement to cede homes to the public land trust, Mike Dunn, deputy communications director for the City of Philadelphia, says, "The agreement was the result of a lot of long discussions since June with the protest camp leaders about the need for affordable housing for the lowest-income Philadelphians, a concern that the mayor has long shared."

Dunn notes that while many of the logistical details surrounding the transition of the land trust properties are still being worked out, camp leaders, the city and PHA are working together to identify vacant houses that are in the public inventory, "to convey to the community land trust, which they will rehabilitate to make habitable. The land trust will identify its own resources [to carry out] these repairs."

Dunn says the protest camp residents' cause is "right and proper, and their needs are valid."

"We hope this agreement could serve as a model for the many U.S. cities whose residents struggle to find affordable housing," he says.

Eric Tars, legal director of the National Homeless Law Center in Washington, D.C., which has held consultations with encampment organizers, explains the significance of this agreement in a Philadelphia Inquirer article by Alfred Lubrano and Oona Goodin-Smith. "We haven't seen a protest encampment like this one that's led to this kind of result," Tars says in the article. "I'm going to tell advocates and other city mayors about how this is a different way, a better way, to deal with people experiencing homelessness."

The Demand for Housing

The protest effort in Philadelphia led by homeless residents successfully transformed itself into a nonprofit organization and a public land trust, and won an unparalleled housing agreement with the city that puts ownership and management into the hands of encampment residents.

Across the United States, there has been an increase in people experiencing homelessness due to the COVID pandemic, and homeless residents have been among the most heavily impacted by the virus. Philadelphia is no exception, and crowding in shelters, often following encampment evictions, has led to a spread of the virus among homeless residents. In May, after the PHA broke up and evicted an encampment outside of the Convention Center, a man who had been evicted from the encampment died from COVID after catching it in a shelter where there was an outbreak of the disease that infected more than three dozen people.

Hood, a leading organizer for the group Occupy PHA, says the death of the resident in the shelter prompted action among homeless residents and existing activist groups in the city.

"The encampment was evicted just as the COVID shelter-in-place orders came," Hood says. "People were moved to the shelter, and there was an outbreak, someone from the encampment died, and that was part of what organized and rallied people."

In March, moms with children, and some other houseless residents, occupied and began living in several vacant Philadelphia homes, inspired, in part, by similar occupations in Los Angeles, Oakland and elsewhere during the coronavirus outbreak.

"All of the people who moved in and have been living in these vacated homes are working people, they're people with families, who can't afford rent in the city," Hood says.

Hood says the racial uprising across the United States following the police killing of George Floyd in Minneapolis on May 25 catalyzed the various existing homelessness activist camps to join forces and inspired enthusiasm among encampment residents who were previously intimidated or fearful of taking action.

"All of our groups had been doing a lot of work around land disposition, gentrification and property rights and ownership in the city," Hood says. "Occupy PHA, which is my group, was fighting the housing authority's role in gentrifying neighborhoods and over-policing; Black and Brown Workers Cooperative was fighting against councilmanic prerogative (which basically gives council members full authority over what can and can't be [done] in a neighborhood, and is mostly used for them to build relationships with developers)," Hood says. "[Black and Brown Workers Cooperative] also focused on land reclamation efforts. For example, they built a little mini-shelter out of corrugated plastic for a homeless person who slept on church steps; they reopened and took over a park that was gated up by new people who moved into the neighborhood. And then the Workers Revolutionary Collective was doing various kinds of outreach with the homeless population."

Following the encampment evictions in January, the groups began to meet and collaborate more frequently. Ultimately, they decided to organize themselves into a collective called the Philadelphia Housing Action to protest the city's handling of housing allocation, and pressure the city and PHA to rethink their response to the housing crisis. This led to the parkway protest—an encampment was set up at Benjamin Franklin Parkway to protest and draw attention to the issues of homelessness and the housing crisis in Philadelphia. This eventually prompted the recent deal with the city, after months of occupation by hundreds of homeless residents, and organized protest actions.

Hood notes that the agreement between protesters and the city does not skip over existing housing waiting lists by giving homes to people from the encampment protests. The homes under consideration that will become part of the public land trust are properties that would have been allocated to private buyers.

"The houses that we were putting people in and demanding that [PHA] give us would not have housed a family on the waiting list; they would have been sold to a developer and been a part of the process of gentrifying our neighborhood," Hood says.

Hood notes that across the country, there are resistance movements forming around housing and land allocation, and says it's up to every person to advocate for affordable housing options.

"It's really everybody's duty," Hood says. "People need to preserve affordable housing and low-income housing. We have to try to find innovative uses for the land. We have to acquire land and homes and build things that are more community-based and not reliant on the administration, or on government funding or [other such] things. I would like to see a national coalition form, to demand [allocation of] land from the government, to be able to preserve affordability, and the culture and values of the neighborhoods."