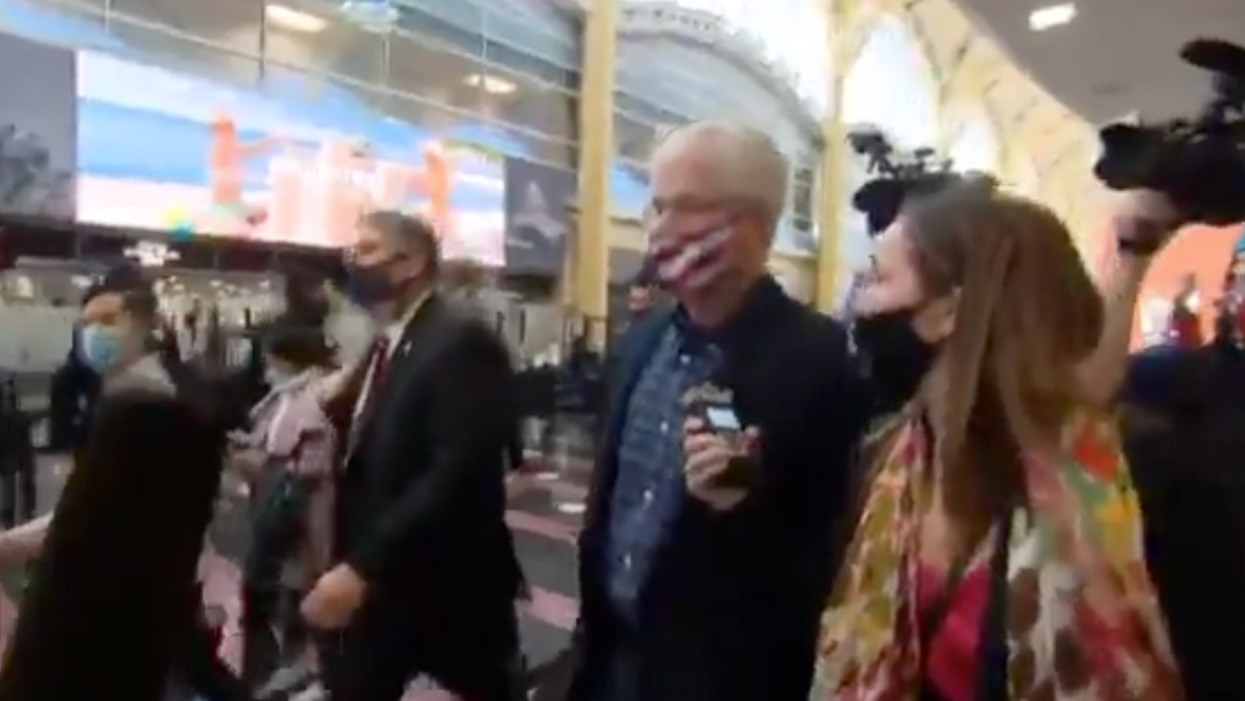 Two Republican lawmakers in the Michigan legislature were reprimanded on Friday as they made their way to the White House for a meeting with President Donald Trump, who has endeavored to overturn the election results in key battleground states won by President-elect Joe Biden.

Rep. Debbie Dingell (D-Mich.) called the meeting between State Senate Majority Leader Mike Shirkey, Speaker of the State House of Representatives Lee Chatfield, and the president "an attempt to subvert our democracy and undermine the will of Michigan voters."

Shirkey was greeted with ridicule when he landed at Reagan National Airport in Washington, D.C.

"Certify the results!" and "Shame on you!" activists chanted, as reporters asked questions, such as "Where is the evidence of fraud?" and "What did Trump promise you?"

Meanwhile, on Twitter, Chatfield was mocked for his attempt to justify his meeting with Trump.

Lonnie Scott, executive director of Progress Michigan, one of the progressive advocacy groups behind the Friday protests, said the behavior of GOP members in his state is appalling.

"For too long, Republicans in Michigan have been able to hide behind gerrymandered districts and their lack of a moral compass to avoid any kind of accountability—but not anymore," said Scott. "We will not sit idly by and watch them attack our democracy and steal our votes."

Friday's protests are a "small taste of what's to come if they attempt to subvert the will of the people," Scott warned. "If Chatfield and Shirkey insist on seeing Trump today, it should be to tell him in no uncertain terms that this election is over, voters have decided, and it's time to move forward together."

Shirkey and Chatfield "have been mum about what specifically they will discuss," The Hill reported, but defenders of democracy have characterized the "meeting itself as inappropriate and part of a broader effort to subvert the will of the voters."

Bob Bauer, a legal adviser to the Biden campaign, described Trump's Thursday invitation as "an open attempt to intimidate election officials," which is "an abuse of office."

According to The Hill, "Dingell and others have expressed cautious optimism that state lawmakers will not cave if Trump urges them to reverse the results in Michigan, citing Shirkey's comments earlier this week that an electoral coup in the state is 'not going to happen.'"

When asked if Shirkey and Chatfield should be subject to investigation, Dingell explained that, while opposed to the meeting, "she would reserve further judgment until seeing what the state lawmakers do."

"It is telling that Michigan GOP legislative leaders Mike Shirkey and Lee Chatfield are jetting off to Washington, D.C. this week to meet with President Trump," the Michigan Democratic Party said in a statement on Thursday. "They are more focused on continuing the GOP smoke and mirrors show designed to hide Trump's humiliating defeat than taking care of the actual problems impacting Michiganders."

As The Hill reported, "Trump and members of his legal team have zeroed in on a long-shot bid to overturn the election results in Michigan and other states... [by] discounting large numbers of votes in urban areas like Detroit, Philadelphia, Pittsburgh, and Milwaukee."

"On Tuesday we witnessed a racist attempt by the GOP to disenfranchise hundreds of thousands of voters," Rep. Rashida Tlaib (D-Mich.) tweeted on Thursday in reference to the initial decision, later reversed, of two Republican members of the Wayne County Board of Canvassers to vote against certifying the results in a Democratic stronghold that includes a majority Black city.

Now, Trump wants Shirkey and Chatfield "to kiss the ring and steal the election," Tlaib added. "He lost, period. Stop being spineless. Focus on the pandemic. People are dying."

According to NBC News, the Michigan lawmakers "could be risking legal exposure back home depending on what actions they take in regards to the state's election results."

"Michigan law is clear," the news outlet continued. "According to the secretary of state: The state's 16 representatives to the Electoral College must go to the candidate who won the popular vote. Trump lost the popular vote to Biden by nearly 150,000 votes in Michigan."

Richard Primus, a constitutional law professor at the University of Michigan, cautioned Shirkey and Chatfield, writing that they "are being visibly invited to a meeting where the likely agenda involves the felony of attempting to bribe a public official."