Donald Trump is seeking to overturn the lawful results of the 2020 election and install himself as dictator for life. There's no doubt about that part. The whole idea is outlandish, infuriating, and should be such a remote possibility that it can be dismissed out of hand. Except, after everything that has happened over the last four years, it's really quite difficult to completely rule out this daylight coup. That's especially true because Republicans keep lining up for the role of minions in this criminal scheme.

On Saturday, more Republicans picked up their democracy-burying shovels. That includes the chair of the Michigan GOP and Pennsylvania Rep. Mike Kelly, both of whom are taking different routes to the same goal—disenfranchising hundreds of thousands of Black voters so that Donald Trump can eek out a "victory." And just to underscore that the rot goes deep, Republican National Committee Chair Ronna McDaniel has added her support to the effort.

At first glance, the letter from Michigan Republican Chair Laura Cox should be the easiest to simply wave away. Cox has absolutely nothing to do with tallying the votes, certifying the results, or selecting the electors. So on the surface, her demand that the state board of canvassers "adjourn for 14 days" to conduct an audit and address "credible reports of procedural irregularities" that do not exist should be moving directly to the nearest circular file. But it's this effort where McDaniel has also signed her name, making it clear that this—in addition to wining and dining Republican legislators—is an officially sanctioned part of Trump's plan to derail the process in a state where he lost by 155,000 votes.

The second effort, with Rep. Kelly as the headliner, is an actual court filing. It claims that the expansion of mail in ballots under a Pennsylvania law called "Act 77" is unconstitutional, and as a remedy, asks that all mail in ballots in the state, with the exception of military ballots, be thrown out. That would be roughly 2.5 million ballots discarded—about 1.6 million of them Democratic ballots. It also amounts to well over a third of all ballots cast in Pennsylvania, which might put Kelly in the running for all-time disenfranchisement king.

When listing members of Congress who are the biggest Trump lackeys, Kelly's name doesn't come up often. But considering that Kelly compared the impeachment of Trump to the attack on Pearl Harbor, and way back in 2017 told his constituents that Barack Obama was continuing to run a "shadow government" that was undermining Trump … maybe he should move up in the rankings. He certainly will after this stunt. Joining Kelly in his lawsuit are a collection of failed candidates for state office in Pennsylvania. and a scattering of "regular" voters who just don't want Black people to vote.

Kelly's lawsuit doesn't just suggest that millions of votes be discarded. In case there's some problem with working out how that would affect the outcome, he has a ready alternative that would prevent the need for anyone to break out a calculator. Instead he asked the judge to "direct that the Pennsylvania General Assembly choose Pennsylvania's electors."

While he's at it, Kelly asks the court to pay for his expenses for trying to throw out the votes of millions of Pennsylvanians. Because why the hell not? 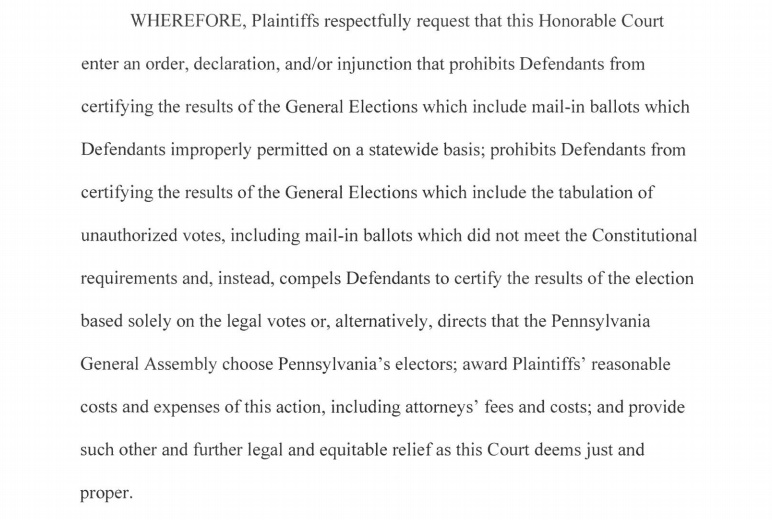