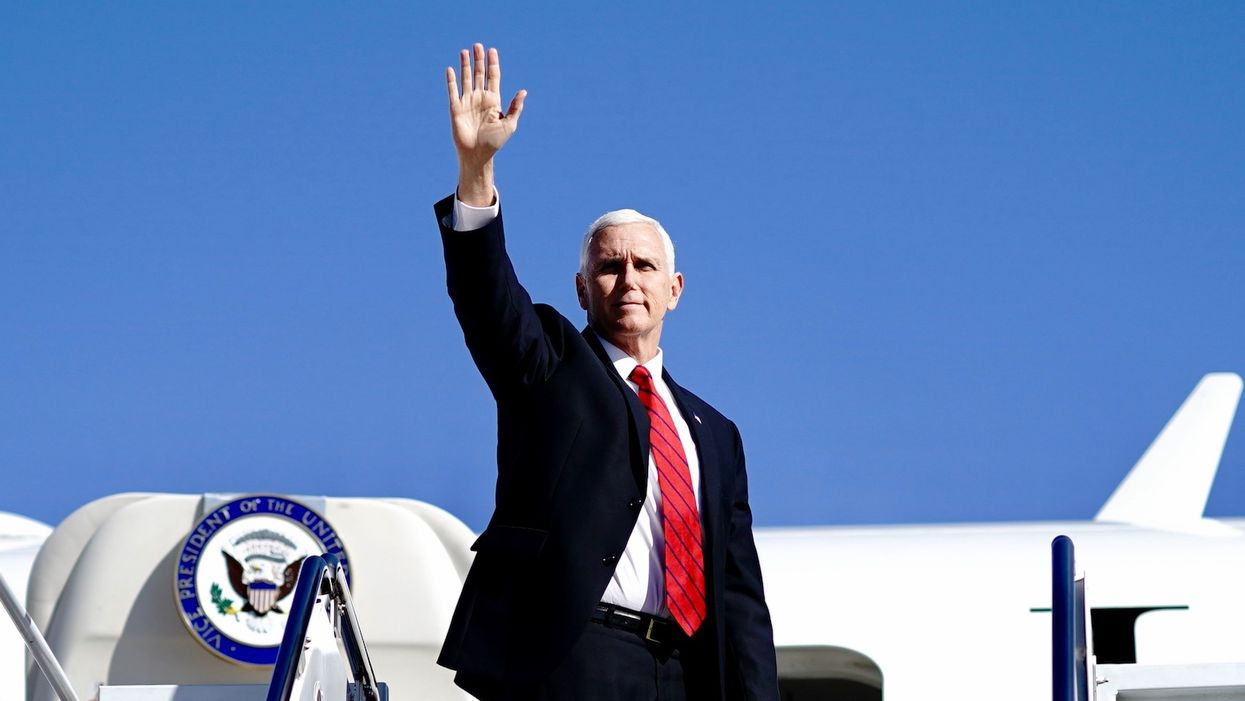 Vice President Mike Pence, who may or may not be the actual Antichrist, has played a long, patient game these last four years. He has embraced Donald Trump's every white nationalist act. He has slathered Trump with praise at every possible opportunity, and has aggressively declared himself to have never seen any of Trump's buffooneries, incompetence, or crimes. He protected Trump through impeachable acts. He adopted, wholesale, Trump's notion that a worldwide pandemic was No Big Thing and led a coronavirus task force that was steadfast, absolutely steadfast, in doing nothing of note to combat it.

Pence did all of this for the usual reason: power, and the certainty that loyally holding Trump's pants up for four years as Trump rampaged around the place would inevitably lead to Pence's own nomination as Republicanism's next presidential contender.

Sucker. Now Donald Trump's contemplating running again in 2024 (if the Secret Service eventually tosses him from the building), and where does that leave Mike Pence? Screwed. It leaves him on the corner of Boned and Screwed, down the street from a crematorium and real close to the sex toy shop.

The New York Times gives a bit of an inside look at the Mike Pence team, although to be honest the whole thing could have been written in advance. Mike Pence has been predictable as a sunrise through the Trump years. He wants to "distance" himself from the current completely batshit insane and dangerous thing Donald Trump is doing so as to protect his own ambitions. He also intends to support Trump in doing the insane and dangerous thing to whatever extent he has to in order to keep Trump's favor. Pence will enable Trump to the end, but Trump has no such loyalty.

It is exceedingly likely that Trump is going to announce he will be running in 2024, whether he truly intends to or not. He is obsessed with his cheering rally crowds. He needs the donations to keep flowing—donations that he may not be able to spend with total freedom, but that continue to be aggressively siphoned off to pay Trump's gargantuan legal bills. He needs to be famous, and not just the kind of famous that allows a person to slap their name on mail-order steaks for pocket change.

Whether he follows through with it or not, that means every Republican who has devoted themselves to Trump for the last four years now has their own presidential ambitions on hold, full stop—or they will be considered an enemy of Trump and Trump's base. Mike Pence can't run for president until Donald Trump gets out of the way, and nobody has ever, in history, been able to pry Donald Trump out of the way when Donald didn't want to go. The man is willing to kill off his own relatives out of spite; he would relish the chance to immolate Mike Pence as he did Marco Rubio.

For now, though, Trump is moping. Multiple reports suggest Trump has completely given up on his day job of being president. CNN reports that "he has thrown relatively few angry fits," which is how we judge American presidents these days, but is despondent, pouting, and weighing the conflicting advice being given to him by Uday and Qusay Trump, who want him to press his coup-like position because they crave power, and Ivanka, who wants him to pack things in while his (her) brand still has cash value to it. The Wall Street Journal reports that Trump has no interest in a lame duck agenda or any other presidenting, no matter how much his staffers jingle those keys.

The odds that Trump can successfully pull off a coup remain near zero. Eventually he is going to be pried from the building and, realistically, the only face-saving measure available to him will be to claim he will win the next election for sure. Probably. Maybe. For whatever length of time he remains unindicted.

In the meantime, take a moment and pour one out for Mike Pence. Mike Pence was a good fascist. Mike Pence protected Trump even when it was long past obvious Trump was not only incompetent at the job, but recklessly incapable of fulfilling it. Even as Trump slid into delusion after delusion, Mike Pence backed him. Even as he committed impeachable acts, Pence was by his side. Even as Trump's indifference killed a quarter million Americans, Mike Pence took to the podium to make damn sure Trump was able to do it slickly and with minimal interference.

What does Mike Pence have to show for it now? Not much. He won't be able to run for president anytime soon, that's for sure. He might be able to wrangle his way into a Celebrity Apprentice cameo, if that's what it takes to pay the bills.