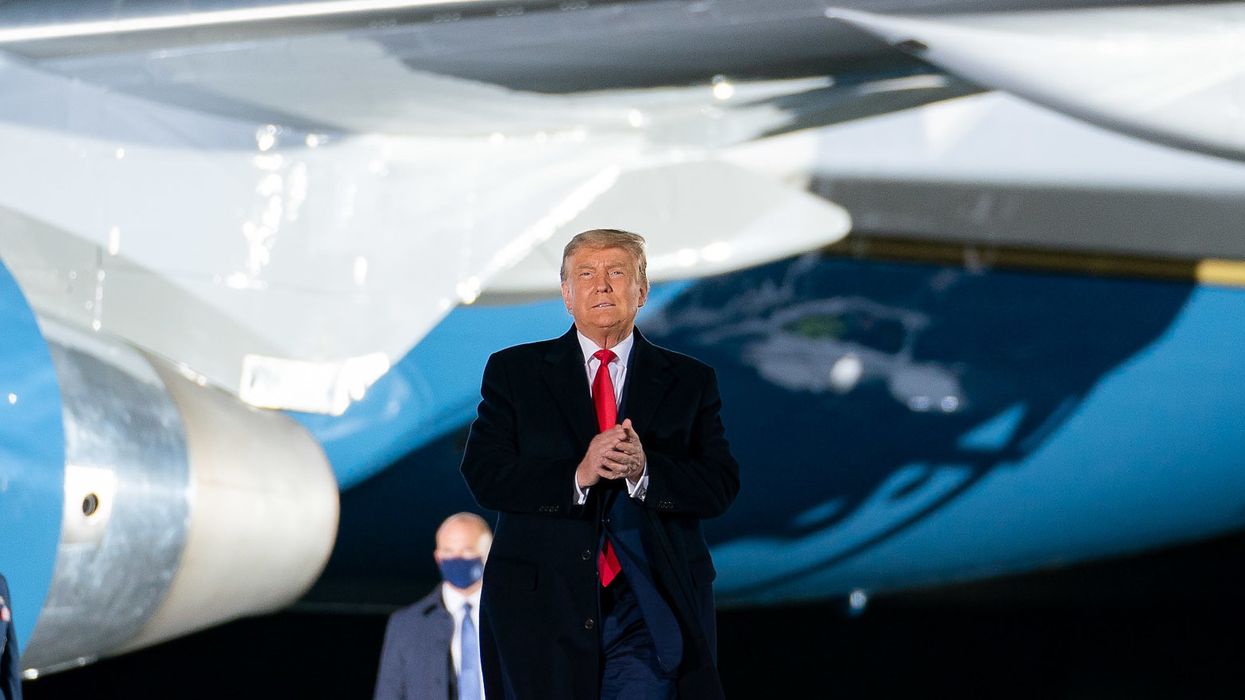 Two law firms representing the Trump campaign may have violated U.S. Postal Service (USPS) regulations and privacy law in the course of advocating for a voter fraud case in the state of Nevada.

Its electoral hopes dwindling, the Trump campaign shifted strategies on Thursday to attempting to litigate its way to a victory. The campaign filed three lawsuits, two of which were tossed within hours, and announced a fourth in Nevada which would allege "thousands" of cases of criminal voter fraud, including allegedly deceased people.

When that suit was filed, however, neither the Trump campaign nor the Republican Party were attached. Instead, it was brought in a Nevada federal court by a state resident, a "credentialed member" of the media (who also described himself to right-wing One America News as a senior advisor to the Nevada Republican Party) and the congressional campaigns for Nevada Republicans Dan Rodimer and Jim Marchant.

While the lawsuit mentioned "over 3,000 instances of ineligible individuals casting ballots," that is not included among the actual legal charges. Instead, those counts stuck to allegations regarding signature verification and observer access to ballot tabulations.

On its merits, the suit appears thin. Nevada residents do not need to provide an official U.S. Postal Service address in order to register to vote.

Clark County Voter Registrar Joseph Gloria told USA Today that while the county would look into the allegations, there was no evidence of abnormalities.

"Their [complaint] is based on something that happens regularly," he said. "You don't have to live here to be eligible to vote here."

Nonetheless, the Department of Justice is reviewing the referral, an agency official told USA Today.

At the same time, Weir's letter to Barr raised the question of how the campaign had accessed the official Postal Service change-of-address database, known as NCOALink, which may be a violation of federal law.

"Specifically, we have identified 3,062 individuals who appear to have improperly cast mail ballots in the election," Weir wrote, echoing the federal suit. "We verified this by cross-referencing the names and addresses of voters with the National Change of Address database."

The NCOALink database is designed to reduce undeliverable mail, but the Postal Service makes good money selling access to licensed vendors, such as direct mail advertisers, who can then rent the list to customers. Anyone who accesses the data is required by law to sign a Processing Acknowledgement Form (PAF) promising the U.S. government that they will use the data exclusively for mailing purposes.

The Postal Service explains that as the custodian of this personal information, the agency must account for all disclosures: "Data for any company/person who is handling a mailing list between the LICENSEE and LIST OWNER must be provided to the USPS to comply with this law. Failure to capture all data can result in the Termination of your license."

Unauthorized users may run afoul of the Privacy Act of 1974, specifically 5 U.S. Code § 552a, according to the the Postal Service:

"No agency shall disclose any record which is contained in a system of records by any means of communication to any person, or to another agency, except pursuant to a written request by, or with the prior written consent of, the individual to whom the record pertains."

The PAF agreements include these promises:

I also understand that the sole purpose of the NCOALink service is to provide a mailing list correction service for lists that will be used for preparation of mailings. Furthermore, I understand that NCOALink may not be used to create or maintain new movers' lists.

It is not immediately clear how Weir or her co-signer, Jesse Binnall, came across the NCOA data. It is also not apparent from the content of their criminal referral to Barr that the "sole purpose" of accessing this data was to prepare for mailings.

While it is possible the campaign's attorneys could argue that they were preparing to notify these voters by mail, the language of the letter suggests the lawyers' sole purpose was simply to compare information: "We verified this by cross-referencing the names and addresses of voters with the National Change of Address database."

A 10-year postal industry veteran, who citing concern for his current government position spoke to Salon on condition of anonymity, said election officials rely on NCOALink to identify voters who may have moved or changed locations so they can mail registration information.

A third-party firm, however, cannot simply run a cross-check on the database, the person said. That would violate the agreement, and it could cost the licensee their license — which can run into the hundreds of thousands of dollars — as well as incur criminal penalties for violating the Privacy Act. Data marketing firms and mail houses take this seriously, the individual said, because a single breach has the potential to bring down their business.

A number of other unexplained elements surround the letter to Barr. For instance, it is unclear why the campaign did not sign on to the Nevada suit, as it said it would. It is also unclear why the letter, which is not a legal document, focused on the specific allegation of registration fraud, when that charge was left out of the lawsuit.

It is also unclear what action, if any, the campaign expects of Barr, and why it felt compelled to take a state-level issue to the federal government.

In a similar letter to the Clark County District Attorney, Weir only specified a cross-check of "publicly available change of address records" — not the NCOA.

"Indeed, we have initially identified 3,062 voters who moved from Nevada before the election but still cast ballots in this election," the letter read. "We have verified this by cross-referencing the list of general election voters with publicly available change of address records. For instance, demographic experts agree that the National Change of Address database only captures about one-third of relocations. Consequently, this number will likely grow by 6,000 voters, at a minimum."

The Democratic National Committee on Friday filed a defense motion calling the Republican allegations of fraud "too late, rife with procedural deficiencies and meritless." The motion pointed to mirror complaints about voter lists from a suit thrown out of Clark County District Court back in September.

Then there are questions about the lawyers themselves.

"Real lawyers wouldn't file this junk, so the campaign had to find new ones who would," campaign finance expert Brett Kappel told Salon, pointing out that the Trump campaign already retained Las Vegas representation.

"The payments will probably show up on the post-general election report, although it's also possible that they were hired by the Nevada Republican Party," he added.

The firm on the letterhead, Weir Law Group, appears to be a one-woman shop in Las Vegas operated by Shana Weir. According to her LinkedIn page, Weir opened the firm nine months ago. The Weir Law Group's Twitter account is currently set to "private," and the website in its bio has not been set up.

Weir is listed as an official delegate for the Nevada Republican Party. Her delegate bio claims that she "began to advise the Nevada Trump campaign on legal issues throughout the primary; and then into the general election." It further claims that she oversaw and "legally advised" poll watchers, as well as filed a suit on behalf of the campaign to halt vote counts on Election Day. (That suit was dismissed.)

However, despite those months of advisory work, FEC searches conducted by Salon found no immediately available record of any Trump campaign payments to Weir nor Binnall, a partner at HarveyBinnall, the Washington-area firm specializing in political law.

Binnall's experience includes his 2016 defense of Dimitri Kesar, the deputy campaign manager for Sen. Ron Paul, R-Ky., who landed in prison after pleading guilty to hiding campaign payments through a third-party vendor — an arrangement which also poses serious legal questions for the Trump campaign.

Weir, Binnall and a Trump campaign spokesperson did not reply to Salon's requests for comment. A Postal Service spokesperson declined to comment.