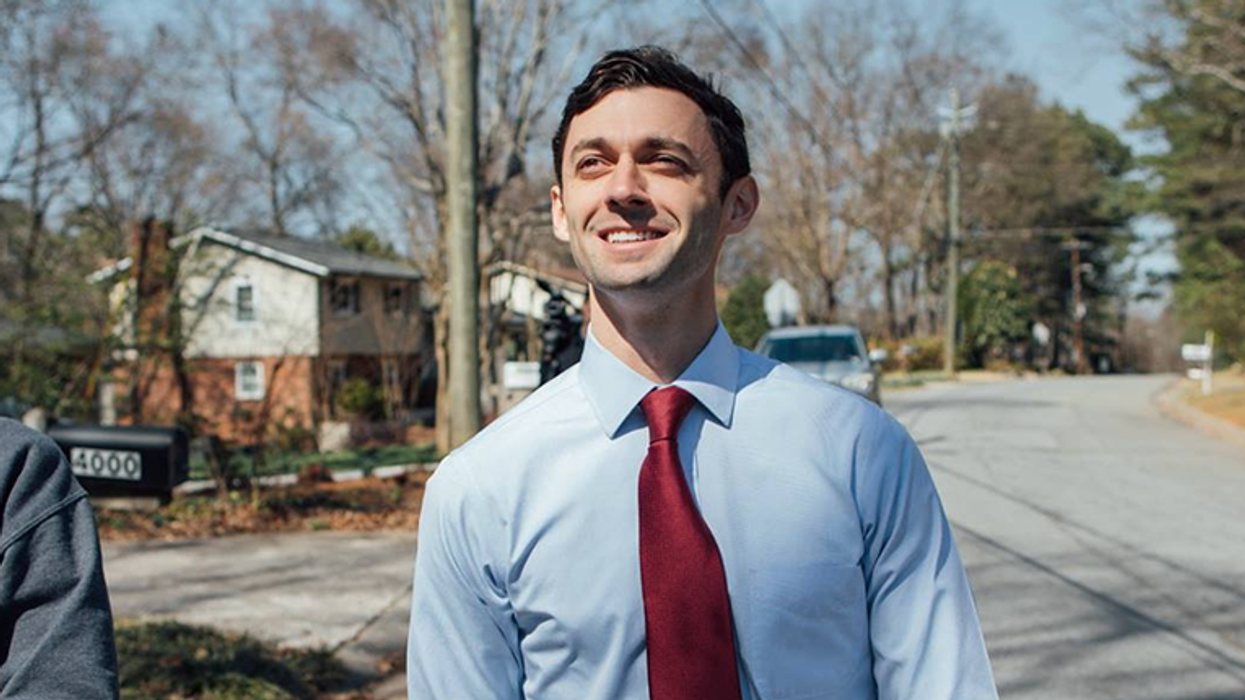 ● GA-Sen-A: As more and more absentee votes have been tallied in Georgia, not only has the race for president narrowed considerably, but the odds of a runoff in the Peach State's regularly scheduled Senate race have grown, creating the possibility that control of the Senate could come down to an extraordinary double runoff on Jan. 5.

With 4.8 million ballots counted as of late Wednesday night, Republican Sen. David Perdue was sitting on 50.2% of the vote, just above the majority needed to avoid a second round. Together, Democrat Jon Ossoff, who has 47.5%, and Libertarian Shane Hazel, who's sitting at 2.3%, need to net just under 15,000 votes in order to push Perdue under 50% and force him into a runoff with Ossoff.

That target kept shrinking over the course of the day Wednesday as officials counted absentee votes, about 90,000 of which remained to be tallied when we put the Digest to bed—the vast majority in Democratic-leaning counties. Further updates are reportedly not expected until 10:30 AM ET, but with many election officials working hard late into the night, it's possible that whether or not we have a runoff could be decided before the sun rises.

If Perdue does in fact finish below that critical majority threshold, Ossoff will do battle once more in early January alongside fellow Democrat Raphael Warnock, who advanced to a runoff with Republican Sen. Kelly Loeffler in the special election for Georgia's other Senate seat.

At the moment, Democrats and Republicans have each won 48 seats in the Senate, though Republicans are likely to wind up with 50 once races in North Carolina and Alaska are called (see our Uncalled Races section below). Should we wind up with a 50-48 Senate favoring the GOP and two runoffs in January, Democrats could seize control of the chamber if they can flip both seats in the event that Joe Biden wins the White House, allowing Kamala Harris to break ties. If that happens, an already wild election season will come to an even wilder finish in Georgia two months from now.

You can stay on top of of all uncalled Senate and House races with our key races tracker, which we'll be updating continually until every last race is settled.

Here's where things stand in the key Senate races that the Associated Press had not called as of Wednesday night:

And here's where things stand in the key House races that the Associated Press had not called as of Wednesday night. Currently, Democrats have won or lead in 219 races and Republicans have won or lead in 216 (see our "Summary" tab here). Several of these results are bound to shift, however, as additional votes are tallied.

The following notable Senate, House, and governor races were called by the Associated Press after midnight on election night:

● State Legislatures: Tuesday night was a big disappointment for Democrats at the state legislative level, especially since this is the last election before the 2020s redistricting cycle. Via the National Conference for State Legislatures, the legislative chambers below are still in doubt. Democrats failed to flip other targeted chambers such as the Iowa House, Minnesota Senate, North Carolina Senate and House, and Texas House.

● CA Ballot: Ride-share giants Uber and Lyft scored a big victory in the most expensive most expensive ballot measure campaign in Californian—and perhaps American—history when voters backed Proposition 22 by a 58-42 margin.

The passage of Prop. 22 designates drivers for "App-Based Transportation and Delivery Companies" as independent contractors with some benefits rather than as employees. Uber, Lyft, and delivery companies like DoorDash spent more than $200 million to pass Prop. 22, while labor groups were only to muster up a tenth of that in opposition.

Unfortunately, though, a 79-21 majority approved Amendment 1, which will rewrite the Florida constitution to emphasize that "only a citizen" may vote instead of "every citizen." While Amendment 1 doesn't alter the status quo, it prevents local governments from experimenting with letting legal permanent residents who lack citizenship vote in local elections, something a handful of small localities in the U.S. and many European democracies already allow.

● MS Ballot: Mississippi voted 78-22 for Measure 2, which repeals a provision of the state's Jim Crow-era constitution that deliberately penalizes Black voters and the Democrats they support in elections for statewide office. The new law requires candidates for posts like governor or attorney general to take a majority of the vote in the general election in order to win outright; if no one hits this threshold, a runoff would take place between the top-two vote-getters.

This new system, though, is still bad for Team Blue because a runoff could lead to a disproportionate drop in Democratic turnout, but it's better than the 1890 law it replaces. Until now, statewide candidates needed to win not only a majority of the vote but also a majority of the state House's 122 districts. If no candidate surpassed both thresholds, the members of the House would choose the winner, and there was nothing to stop them from picking the person who lost the popular vote.

Voters also supported Measure 3, which will adopt a new state flag, by a 72-28 margin. Earlier this year, GOP Gov. Tate Reeves signed a bill that retired the 126-year-old state flag, which prominently displayed the Confederate battle emblem, in the face of a boycott by the NCAA and SEC. The Commission to Redesign the Mississippi State Flag was tasked with designing a new flag, and it settled on one with a magnolia in the center and the words "In God We Trust" below; the design was approved by voters on Tuesday.

● St. Louis, MO Ballot: Voters in the city of St. Louis supported Proposition D, a ballot measure to make it only the second municipality in America to adopt an "approval voting" system for its local elections, by a strong 68-32 margin. Approval voting will be used for the first time early next year when Democratic Mayor Lyda Krewson is up for a second term.

As we've written before in the Voting Rights Roundup, all the contenders will face off on one nonpartisan ballot, and voters could cast as many votes as there are candidates, with up to one vote per candidate. The top-two vote-getters will then advance to a general election.

The goal of this method of voting is to eliminate the "spoiler" problem, where a candidate wins without majority support only because their opposition was divided. The approval approach attempts to ensure that the most broadly acceptable candidate prevails. Fargo, North Dakota is the only other American city that uses approval voting, though unlike the St. Louis system, there is no runoff there.

● Miami-Dade County, FL Mayor: Sunshine State Democrats got a bright spot on an otherwise dreary Tuesday when Daniella Levine Cava defeated Republican Steve Bovo 54-46, a result that makes her the first woman to lead Florida's largest county. Levine Cava is also the first Democrat to hold this office since 2004.

● Redistricting: Here's our look at where control over 2020s redistricting stands as of now, which is shaping up to be bleak for Democrats—and democracy:

Democrats failed to gain key legislative chambers in 2020 and break the GOP's full control over Florida, Georgia, Iowa, North Carolina, or Texas, and the Kansas GOP's supermajorities so that they could uphold the Democratic governor's vetoes there. Democrats also gained just one of the two Ohio Supreme Court seats needed for a 4-3 majority that could have curtailed GOP gerrymandering there, while Republicans swept every Supreme Court in Texas to maintain their 9-0 majority. Democrats also failed to win the governor's office or break the GOP's legislative supermajorities to stop a GOP congressional gerrymander in Missouri.

Democrats' only substantial gain so far was with gaining Oregon's secretary of state office, which ensures they will control legislative redistricting instead of potentially letting the GOP gerrymander. Democrats did gain a 4-3 majority on Michigan's Supreme Court in addition to Democratic Gov. Gretchen Whitmer's existing veto power, though the ability of both to stop the GOP legislature from gerrymandering could be threatened by the U.S. Supreme Court.

One small bit of good news is that Team Blue appears to have stopped the GOP from gaining a filibuster-proof majority that would let them gerrymander Nebraska, though the GOP could always end the filibuster with a simple majority if its various factions can overcome their differences, which is not guaranteed. Democrats additionally stopped the GOP from gaining gerrymandered supermajorities in Wisconsin, but the GOP's state Supreme Court majority there may yet strip Democratic Gov. Tony Evers of his power to veto new gerrymanders.

Finally for Team Blue, New Jersey voters also approved Democrats' cynical ballot measure that will likely postpone legislative redistricting from 2021 to the 2023 elections. That ballot measure was intended to protect Democratic incumbents both in the primary and general, and while partisan control was unlikely to be at stake in such a blue state, maintaining lines based on the 2010 census hurts New Jersey's growing Asian and Latino populations.

Instead of Democrats making major inroads, Republicans actually gained ground by regaining their gerrymandered majorities in both chambers to assume full control over New Hampshire. Republicans also gained enough seats to deny Democrats and the left-wing Progressive Party the two-thirds supermajority they had enjoyed in Vermont's state House (they failed to break the Democratic-Progressive Senate supermajority). Independents now hold the key to overriding GOP Gov. Phil Scott's vetoes, but that looks very unlikely for redistricting and other issues in a state where bipartisan comity remains a rare holdout.

Missouri voters also passed the GOP's deceptive ballot measure that will roll back 2018's legislative redistricting reform, ensuring that even its bipartisan legislative commission will enact legislative maps that give the GOP an undue advantage. Finally, Republicans have gained at least one North Carolina Supreme Court seat and tentatively lead in two more, potentially cutting the 6-1 Democratic majority down to 4-3 Democratic and weakening a check against their gerrymanders, though many provisional and absentee ballots are yet to be counted and likely lean Democratic

While Virginians voted to create a bipartisan redistricting commission that would prevent Democratic gerrymandering, which should ensure that the legislative districts are relatively fair for 2021, the inability of Democrats to control congressional redistricting there only further cements the GOP's national advantage when red states don't similarly follow suit.

At the national level, Democrats failed to gain enough seats outright to win the Senate, though they may yet do so in Jan. 5 runoffs in Georgia depending on the uncalled GA-Sen-A seat held by GOP Sen. David Perdue; Perdue currently holds just over a majority of the vote with many mail votes left to count. If Democrats don't take the Senate, they can't pass HR 1 and ban congressional gerrymandering nationally. Nor can they reform the Supreme Court and get it to stop enabling GOP gerrymanders.