Do you believe in omens?

While Joe Biden was giving his final speech in Iowa, these two guys flew in circles over top of him:

I looked it up. Florida and Alaska have the most bald eagles. Yet I've lived all over Florida these past 25 years and have never once encountered one. It's a rare sight, and in this case, very poetic.

This isn't even the first time an eagle has visited Biden when he was speaking. In September, another eagle flew above Biden during a speech, and it promoted him to talk about his late son, Beau Biden. He remarked that he hadn't seen a bald eagle since Beau died in 2015. Now he sees one on the eve of his presidency. Coincidence?

Bald eagles are fickle creatures. They may have visited Biden multiple times, but Trump has only had one encounter. It was a bit less majestic:

If you believe the spirit of our nation sent those birds for Biden, then you would also have to believe it toppled a giant American flag being used as a prop during Trump's hate rally in North Carolina.

The giant flag was being held with two large scissor lifts, which was a stupid idea. No planning, half-assed execution, and a total disregard for safety. In other words, a perfect Trump event. Luckily, the lift fell backwards into a building. If the gust of wind had blown the other way, the big story tonight would have been that Trump killed his supporters.

Sorry guys, you'll just have to wait for the COVID like the rest of his super-spreader events.

I would say Trump's malicious incompetence almost killed people tonight, but that would be an incomplete statement. Trump's malicious incompetence has already killed hundreds of thousands of innocent Americans, and this needs to end. (BTW, speaking of reckless endangerment: after all the bad press Trump got for abandoning his supporters to the freezing cold in Omaha, how in the hell did he manage to do the exact same thing AGAIN today in Georgia!?)

I'll end on a positive note, with one final omen. No, this was NOT planned. It's a scene from Joe Biden's speech. As the meme says, post in comments if you get it. 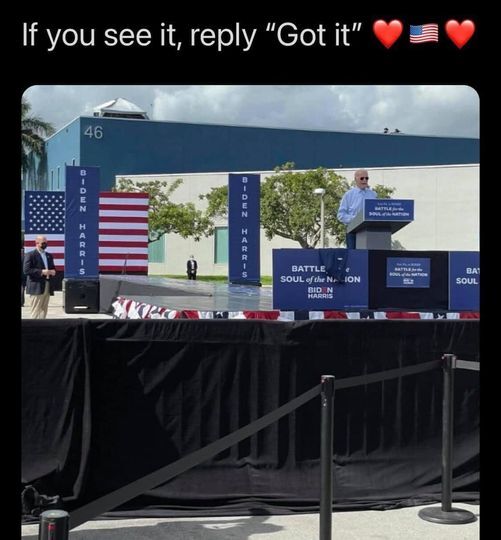 Yeah, the data, the polls, and the turnout all look pretty damn good tonight. We're ready. But if you are superstitious at all, the omens work in our favor as well.