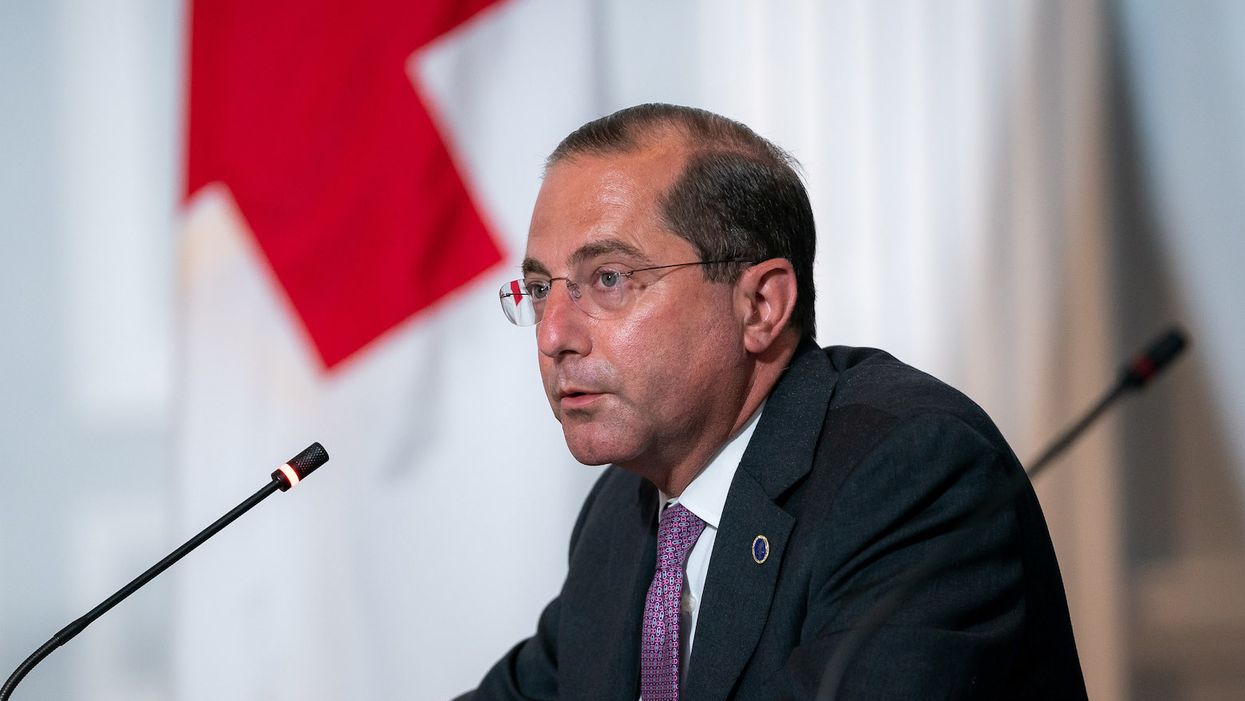 As the number of new coronavirus cases in the United States hit a record high for the third straight day on Friday, Health and Human Services Secretary Alex Azar tried to praise outgoing President Donald Trump's response to the pandemic.

Azar's comments came at a late afternoon news conference about Covid-19—during which Trump, who has refused to concede to President-elect Joe Biden, took no questions from reporters and did not directly mention last week's election.

Speaking after Trump, the health secretary said: "Thank you, Mr. President, for providing the leadership that's gotten us where we are today. The success that Operation Warp Speed has realized so far has been made possible only because of the bold vision you announced not even six months ago right here in the Rose Garden."

As of Friday, the United States shattered records yet again by reporting over 176,000 cases. According to the Washington Post, "Eighteen states, most of them in the Midwest, have reported record numbers of hospitalizations, a 'catastrophic' surge that experts say is rooted in distrust of the government."

The contrast between Azar's attempted praise during the event to update the public on Covid-19 vaccine trials and the reality that Americans are facing right now in terms of both health and financial conditions was immediately highlighted on social media by journalists and critics of Trump:

The Trump administration, along with the president personally, has faced intense criticism for mishandling the pandemic. In the wake of Trump's defeat, cases have kept climbing—including among Secret Service agents—and critics have continued to call him out for failing to adequately tackle the crisis.

"Instead of fighting to defeat the Covid-19 pandemic that has killed over 242,000 Americans, the Trump administration is spending its final days in office fighting a bogus voter 'fraud' problem that does not exist," Sen. Bernie Sanders (I-Vt.) said Thursday. "Pathetic. The Biden-Harris Administration cannot come soon enough."

By Friday evening, the Post's tracker put the nation's death toll from the pandemic above 243,000 and documented more than 10.7 million cases in the U.S. alone. In response to the surges across the country, some Democratic leaders are increasing restrictions.

Oregon Gov. Kate Brown, a Democrat, on Friday announced a two-week statewide "freeze" to stem the spread of the virus that, according to the Columbian, will restrict restaurants and bars to take-out only as well as close gyms and both indoor and outdoor recreational facilities from November 18 to December 2.

In a video address, Brown warned that "if we do not act immediately, we will soon reach a breaking point."

Meanwhile, in New Mexico, Democratic Gov. Michelle Lujan Grisham also announced on Friday a two-week shutdown in her state. Starting Monday, "dining at restaurants, gyms, salons and other 'nonessential' businesses will have to close their doors," reported KRQE. "The new rules will be in effect until November 30."