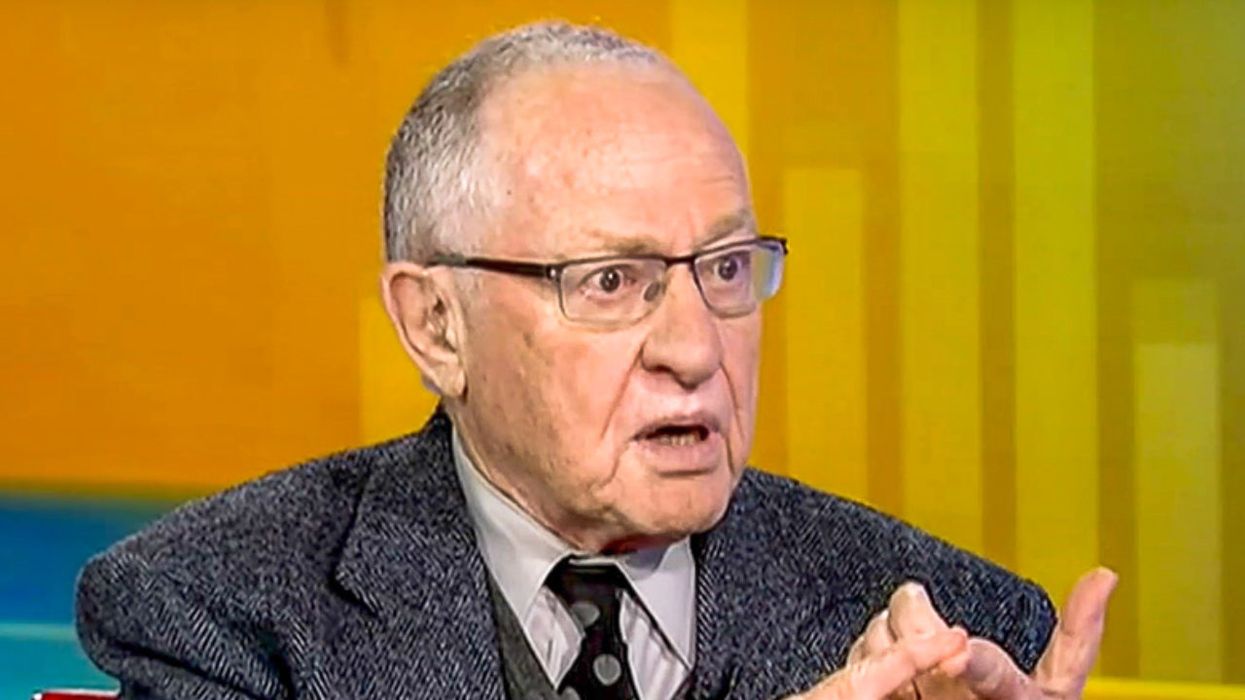 Formerly respected attorney Alan Dershowitz shifted into damage control Saturday on Twitter, perhaps in an attempt to win his way back into the dark heart of Donald Trump, at least for the moment.

Dershowitz had been a bad boy earlier this week when he told Fox News host Maria Bartiromo that "if you're betting money you can't afford to lose, you have to bet that the outcome of the election will not be reversed." That couldn't have pleased the home offices at Mar-A-Lago and Moscow.

Saturday, Dershowitz decided to throw the full weightlessness of his legal genius behind Trump's scandalous pardon of confessed two-time liar, General Michael Flynn. The Flynn pardon is old news, having been announced by Trump three days earlier, but Dershowitz was all over it 72 hours later.

In a truly bizarre tweet, Dershowitz rushed belatedly to Trump's defense and — oh, by the way — took the occasion to plug his phone number and podcast in case you'd like to subscribe and give him likes and tell your friends about it. You can hear all of that and more self-promotional stuff in Dershowitz's online rant. For real.

In Dershowitz's passionate podcast defense of Flynn, he essentially argues that while Flynn clearly lied to the FBI, which he admits is a crime, and while Flynn clearly violated the Logan Act, another crime, that the whole thing shouldn't have mattered because the FBI shouldn't have charged him in the first place. Oh, and by the way, the Logan Act was declared unconstitutional — by Dershowitz — so therefore Congress must have overreached by having the audacity to have passed it.

In Dershowitz's twisted view, all of Flynn's crimes were negated, strangely, by Congress' presumed legislative overreach, combined with FBI overreach for prosecuting a guy for lying about something it had on tape, combined with judicial overreach by Judge Emmet G. Sullivan for not readily forgiving having been lied to on multiple times by a defendant.

With shameless irony, Dershowitz slandered Sullivan for "conducting a political circus" because he apparently didn't appreciate a politicized Justice Department taking the extraordinary step of attacking itself for having prosecuted Flynn in his courtroom. In Dershowitz's screed, he first called Sullivan "generally a good judge." Moments later, he insulted the respected Sullivan by referring repeatedly to him as the "buttinsky judge" in this case.

In Dershowitz's telling, he only heroes here were Flynn, the confessed liar, and Trump the guy who sprung Flynn for lying in service to him. Alrighty then.

"It's a perfect example of where the judiciary did wrong, the legislature did wrong and the prosecution did wrong," Dershowitz whined. "And who is the only person who could check and balance all that wrongdoing? The president of the United States with his pardon power.

"So the president acted not only perfectly properly, but in a positive good way by doing what the judge should have allowed the Justice Department to do, which is drop the case."

Dershowitz said he hoped Trump would issue more pardons and commutations, in particular for some of his clients.

Suffice it to say Dershowitz's ranting was not universally well-received on Twitter.