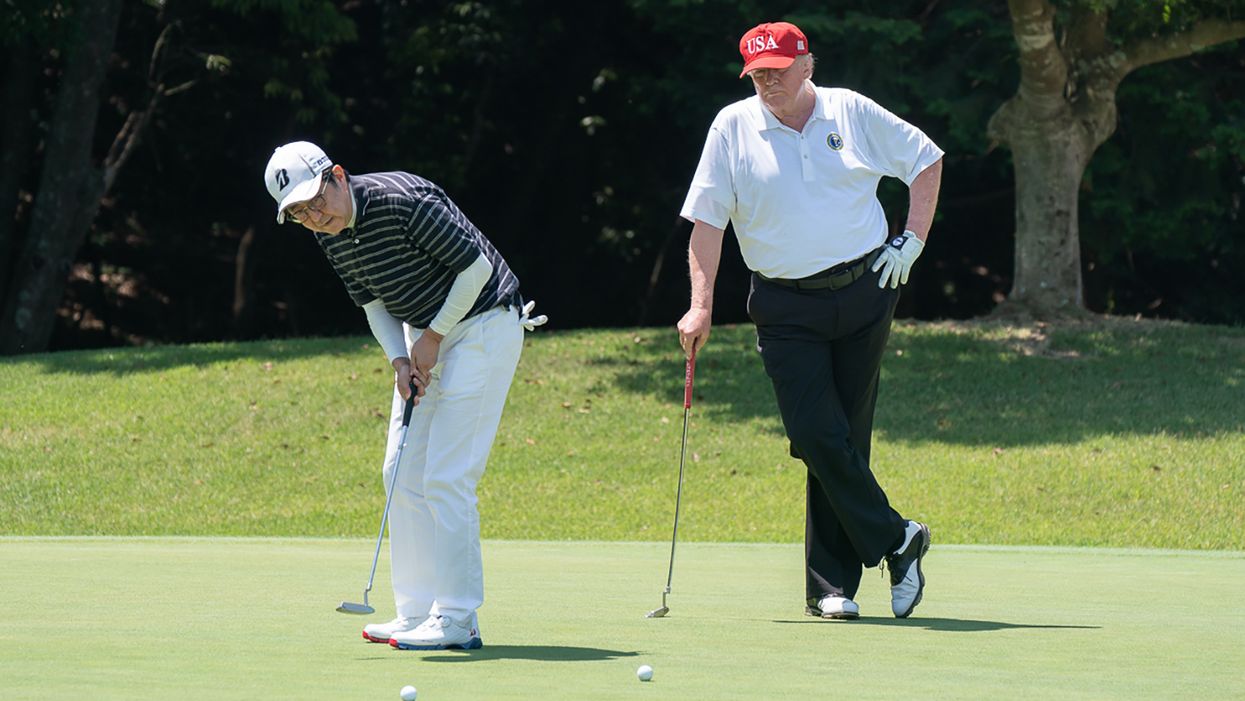 President Donald J. Trump watches as Japan Prime Minister Shinzo Abe makes a putt during their golf game Sunday, May 26, 2019, at the Mobara Country Club in Chiba, Japan. (Official White House Photo by Shealah Craighead)
Trump's resort business is collapsing — is that why he pushed to reopen the economy?
Thom Hartmann
October 30, 2020

On April 18, Bob Woodward recorded Jared Kushner saying that Trump had taken control away from the doctors and was going to open the country back up. So what might have provoked that? What was happening right around that time?

Trump's official national emergency declaration came on March 11, and most of the country shut down or at least went partway toward that outcome. The economy crashed and millions of Americans were laid off, but saving lives was, after all, the number one consideration.

Trump put medical doctors on TV daily, the media was freaking out about refrigerated trucks carrying bodies away from New York hospitals, and doctors and nurses were our new national heroes.

And then came April 7, 2020, when the New York Times ran a front-page story with the headline: "Black Americans Face Alarming Rates of Coronavirus Infection in Some States."

Across the American media landscape, similar headlines appeared at other outlets, and the story was heavily reported on cable news and the network news that night. White American conservatives responded with a collective, "What the hell?!?"

It didn't take a medical savant, of course, to figure out that would be the case. African Americans die at disproportionately higher rates from everything, from heart disease to strokes to cancer to childbirth.

It's a symptom of a racially rigged economy and a health care system that only responds to money, which America has conspired to keep from African Americans for more than 400 years. Of course they're going to die more frequently from coronavirus.

But the New York Times and the Washington Post simultaneously publishing front-page articles about that disparity with regard to COVID-19, both on April 7, echoed across the right-wing media landscape like a Fourth of July fireworks display.

Tucker Carlson, the only primetime Fox News host who'd previously expressed serious concerns about the death toll, changed his tune the same day, as documented by Media Matters for America.

Now, he said, "we can begin to consider how to improve the lives of the rest, the countless Americans who have been grievously hurt by this, by our response to this. How do we get 17 million of our most vulnerable citizens back to work? That's our task."

White people were out of work, and Black people were most of the casualties, outside of the extremely elderly. And those white people need their jobs back!

Brit Hume joined Carlson's show and, using his gravitas as a "real news guy," intoned, "The disease turned out not to be quite as dangerous as we thought."

Left unsaid was the issue of whom it was not "quite as dangerous" to, but Limbaugh listeners and Fox viewers can hear dog-whistles.

More than 12,000 Americans had died from coronavirus by April 7, but once we knew that most of the non-elderly victims were Black, things were suddenly very, very different. Now it was time to quit talking about people dying and start talking about white people getting back to work!

It took less than a week for Trump to get the memo, presumably through Fox and Stephen Miller. On April 12, he retweeted a call to fire Dr. Anthony Fauci and declared, in another tweet, that he had the sole authority to open the United States back up, and that he'd be announcing a specific plan to do just that "shortly."

On April 13, the U.S. Chamber of Commerce published a policy paper titled "Implementing a National Return to Work Plan."

Unspoken but big on the agenda of corporate America was the desire to get the states to rescind their stay-home-from-work orders so that companies could cut their unemployment tax losses.

On April 14, Freedomworks, the billionaire-founded and -funded group that animated the Tea Party against Obamacare a decade earlier, published an op-ed on their website calling for an "economic recovery" program including an end to the capital gains tax and a new law to "shield" businesses from lawsuits.

Three days after that, Freedomworks and the House Freedom Caucus issued a joint statement declaring that "it's time to re-open the economy."

Freedomworks published their "#ReopenAmerica Rally Planning Guide" (pdf) encouraging conservatives to show up "[i]n-person" at their state capitols and governors' mansions, and, for signage, to "Keep it short: 'I'm essential,' 'Let me work,' 'Let Me Feed My Family'" and to "Keep them homemade."
One of the first #OpenTheCountry rallies to get widespread national attention was April 18 in New Hampshire. Over the next several weeks, rallies had metastasized across the nation, from Oregon to Arizona, Delaware, North Carolina, Virginia, Illinois and elsewhere.

One that drew particularly high levels of media attention, complete with swastikas, Confederate flags and assault rifles, was directed against the governor of Michigan, rising Democratic star Gretchen Whitmer.

When Rachel Maddow began reporting on meatpacking plants that had become epicenters of mass infection, the conservative Chief Justice of the Wisconsin Supreme Court pointed out that the virus flare wasn't coming from the white "regular folks" of the surrounding community.

The conservative meme was now well established: the risk to white people was small, so let's get back to work.

It came to Trump's attention that the biggest outbreaks were happening in prisons and meatpacking plants, places with few white people (and the few whites in them were largely poor and thus seen as disposable).

Trump's response to this was to issue an executive order using the Defense Production Act (which he had hesitated to use to order the production of testing or PPE equipment) on April 28 to order the largely Hispanic and Black workforce back into the slaughterhouses and meat processing plants.

While April 18 was the day Woodward recorded Jared Kushner bragging about how they were going to start ignoring the doctors, April 7 was the date that sealed the fate of America.