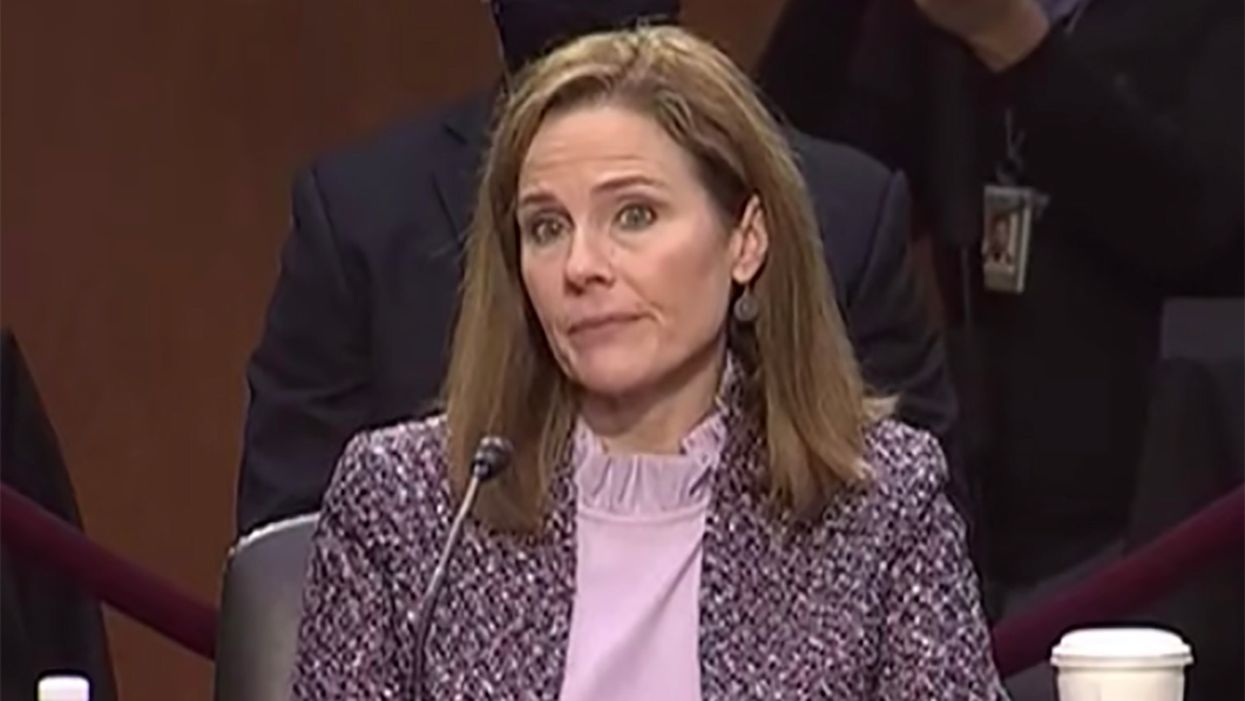 On Monday, October 26, the U.S. Senate voted to confirm President Donald Trump's Supreme Court nominee, Judge Amy Coney Barrett — who has taken over the seat that was held for many years by the late Justice Ruth Bader Ginsburg. The votes, as expected, came down along party lines: Sen. Susan Collins of Maine was the only Senate Republican who voted against Barrett's confirmation — and even the most centrist Democrats in the Senate, including Sen. Joe Manchin of West Virginia and Sen. Kyrsten Sinema of Arizona, voted against her. With the 2020 election less than a week away, a question that Republicans are contemplating is: will Barrett's confirmation help or hurt the GOP's battle to maintain control of the Senate?

Senate Majority Leader Mitch McConnell is expressing no regrets whatsoever about ramming Barrett's confirmation through the Senate. McConnell, discussing the political ramifications of the confirmation, told Politico, "In terms of the politics of it, I think it was helpful for us in 2016 and 2018, and it is clearly, I think, a plus in 2020 as well. So: good for the country and good for us politically as well."

Arguably, the confirmation of Justice Brett Kavanaugh hurt Republicans in the 2018 midterms: that year, Democrats enjoyed a major blue wave in the U.S. House of Representatives and flipped 40 GOP-held seats. However, Republicans slightly increased their majority in the Senate two years ago.

McConnell is looking at the big picture and the long-term impact that Barrett's confirmation could have. Barrett is a 48-year-old Generation X-er, which means that if she lives as long as Ginsburg, it's entirely possible that she could still be on the Supreme Court 38 years from now. McConnell told Politico, "Permanency depends on the next election. So, that's the way legislation goes. But in judicial appointments, you can have a longer-lasting positive impact."

On Sunday, October 25 — the day before Barrett was confirmed by the Senate — McConnell declared, "A lot of what we've done over the last four years will be undone sooner or later by the next election…. (Democrats) won't be able to do much about this for a long time to come."

With that statement, McConnell was acknowledging the possibility that Democrats might regain control of the U.S. Senate on November 3. Even if Democratic Sen. Doug Jones loses in Alabama (which appears likely, according to polls), Democrats would obtain a Senate majority if they flipped several GOP-held seats. Incumbent GOP senators who are considered vulnerable include Collins, Arizona's Martha McSally, Colorado's Cory Gardner, Iowa's Joni Ernst and North Carolina's Thom Tillis.

McConnell, however, obviously isn't losing any sleep over that possibility. And his attitude is that even if Republicans lose their Senate majority and Trump loses the White House, so be it — Barrett will be on the Supreme Court for a very long time. McConnell, according to polls, doesn't appear to be among the Senate Republicans who is in danger of being voted out of office. And if McConnell were among the GOP survivors in a "President Joe Biden/Democratic Senate majority" scenario — one in which he became Senate minority leader rather than Senate majority leader — he would become the face of the opposition and the most powerful Republican in Washington, D.C.

Democrats, journalist Jacqueline Alemany reports in the Washington Post, are "steaming mad" over the way Trump and McConnell rammed Barrett's confirmation through the Senate and have been quite aggressive in their fundraising for Senate races.

"Democrats hope the Barrett court fight has energized their voters, as they obsessively argue that Barrett is a vote to overturn the Affordable Care Act," Alemany reports. "SCOTUS, with Barrett on it, is slated to once again take up the ACA's constitutionality during the week following the election…. Democrats are convinced their voters are steaming mad at McConnell's aggressive move to push through Barrett after denying even a confirmation hearing to President Barack Obama's nominee, (Judge Merrick Garland), much earlier in an election year, (2016)."

Replacing the liberal Ginsburg with Barrett — a far-right social conservative along the lines of Justice Clarence Thomas and the late Antonin Scalia — is a definite game-changer for the Supreme Court. Democratic fundraisers have been emphasizing that everything from Obamacare to abortion rights to same-sex marriage is on the line. Barrett was quite evasive when Senate Democrats questioned her during her confirmation hearings, but given her extreme social conservatism and connection to the disturbing group People of Praise, it isn't hard to imagine her voting that key right-to-privacy decisions like Roe v. Wade, Lawrence v. Texas, Obergefell v. Hodges and Griswold v. Connecticut were wrongly decided.

Barrett's confirmation could inspire Christian Right voters to support GOP Senate incumbents this year, although it could also inspire Democrats and swing voters to vote against them. But whether Republicans keep or lose their Senate majority in 2020, the United States could be stuck with Justice Amy Coney Barrett for 35 years or longer.