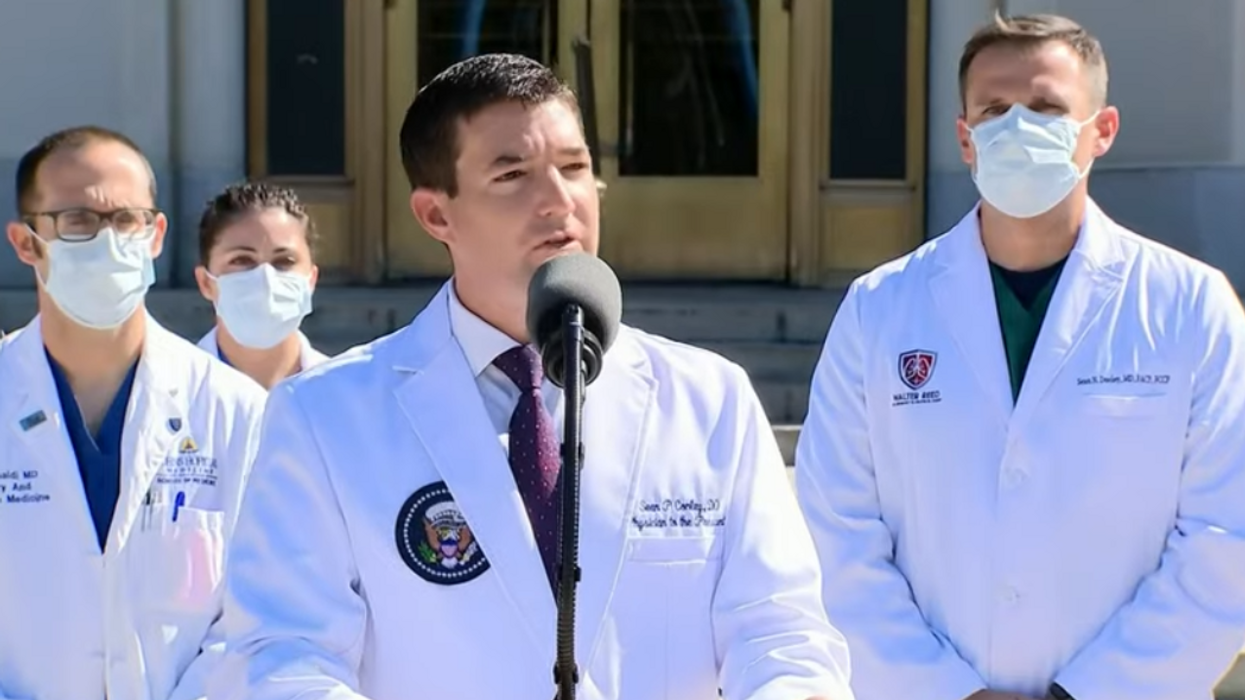 During a press conference outside of Walter Reed Medical Center, Conley noted that they are "just 72 hours" into the president's COVID-19 diagnosis. He also claimed the president had been fever-free for "over 24 hours."

Trump’s physician Dr. Sean Conley says Trump is “72 hours into the diagnosis” which would mean he was diagnosed on… https://t.co/ABVjTVOxPP
— The Recount (@The Recount)1601741491.0

The doctor's misstep was not missed. Almost immediately after making the statement, reporters quickly questioned Conley's timeline since the president just announced his positive test results around 1:00 a.m. on Friday morning. Based on Conley's suggested timeline, the president may have tested positive sometime Wednesday. Footage of the press conference is already going viral on social media as Twitter users are doing the math and noting that the questionable timeline does not add up.

The main question is: When exactly did the president test positive for coronavirus?

Many people are also noting what Conley's timeline suggests: Trump traveled for days and interacted with hundreds of people as he dismissed masks and social distancing — all while being well aware that he was COVID positive.

Doctor Sean Conley referred to the fact that Trump was diagnosed 72 hours ago, which would actually mean he was dia… https://t.co/E6ZNzDRhFz
— Shari Lynn (@Shari Lynn)1601742126.0

The White House's response to the debacle has only made things more speculative. In an attempt to offer clarity about Conley's remarks, a White House official appears to confirm what the doctor said.

The tweet reads, "A White House official clears up timeline from Walter Reed newser: Conley meant to say it's 'Day 3' of the diagnosis, NOT 72 hours. Trump's diagnosis was Thursday night. Regeneron was administered two days ago, not 48 hours ago."

What is going on right now? The WH, which has a deep credibility issue w/ many, needs to clarify when the president… https://t.co/zkwBbVBYRw
— Yamiche Alcindor (@Yamiche Alcindor)1601742296.0

Despite the White House official's claim, it is important to note that doctors typically reference time in hours, not days.

The president has also been lambasted by one of his donors for moving forward with the fundraiser at his golf club in Bedminster, N.J., on Thursday evening.

During a phone interview, Dan Eberhart, chief executive officer of Canary Drilling Services who donated $100,000 to Trump's re-election campaign in June, criticized the president's actions as he described him as "reckless." Although Eberhart did not attend Thursday's fundraiser, he slammed Trump for still attending the event just knowing Hicks had tested positive.

Trump's announcement about his test results came one day after White House Advisor Hope Hicks' test results revealed. Bloomberg broke the story about Hicks' diagnosis which raises questions about whether or not the White House would have disclosed the information.

As a result of Conley's latest remarks, the White House is being scrutinized yet again for its lack of transparency.