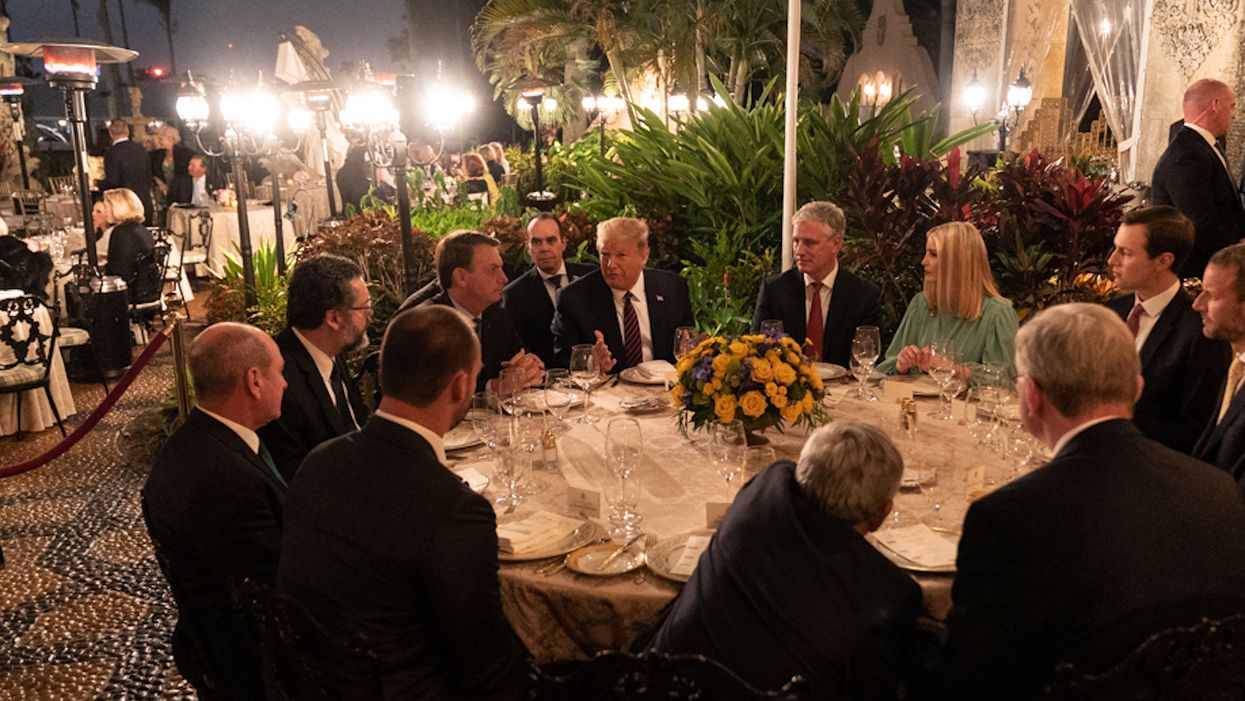 When Donald Trump ran for president in 2016, he railed against crony capitalism in Washington, D.C. and promised to "drain the swamp" if elected. But a Washington Post article published this week takes a close look at the profits that his businesses have been enjoying at the expense of taxpayers because of his presidency.

The Post notes that when Trump met with Japanese Prime Minister Shinzo Abe, they did so at the president's Mar-a-Lago resort in South Florida — which Trump described as the "southern White House."

"For Trump, there was another hidden benefit: money," the Post reports. "At Mar-a-Lago, Trump's company would get paid to host his summit. In the next two days, as Trump and Abe talked about trade and North Korea, Trump's Palm Beach, Fla., club billed the U.S. government $13,700 for guest rooms, $16,500 for food and wine and $6000 for the roses and other floral arrangements."

But according to Post reporters David A. Fahrenthold, Josh Dawsey, Jonathan O'Connell and Anu Narayanswamy, that meeting with Abe was hardly the only time Trump properties have profited from government business.

"Since his first month in office, Trump has used his power to direct millions from U.S. taxpayers — and from his political supporters — into his own businesses," the reporters explain. "The Washington Post has sought to compile examples of this spending through open records requests and a lawsuit. In all, he has received at least $8.1 million from these two sources since he took office, those documents and publicly available records show."

The Trump Organization, according to the Post, has been billing U.S. taxpayers for a wide range of items.

The Post's reporting is receiving a great deal of attention on social media. Fahrenthold tweeted the article on Tuesday, noting, "Previously un-released documents show the government has paid $2.5 million to @realdonaldtrump 's businesses. Far more than we knew. Trump Org charged $7700 for a dinner, $6000 for floral arrangements…. and $3 for POTUS's own glass of water." And responses have been numerous.

Twitter user Peter Charbonneau, @pcharbonneau21, sarcastically posted, "B-b-b-but he doesn't take a salary!" — to which @barefootnonna responded, "No but he spends many times more of taxpayer dollars on visits to his resorts. Taxpayers would be much better off if he would take his salary and quit benefiting himself financially at our expense. Imagine Obama that!"

@Schnufflerowner tweeted, "$3 for a glass of water is a costly way to drain the swamp." And @007__NIL responded with more sarcasm, posting, "To be fair $3 for water wasn't bad given they had to supply it in a sippy cup."

Other Twitter users, however, weren't so sarcastic — just angry.

@BishesBrew wrote, "Trump has been stealing from the American taxpayers from Day One, just like Trump has also been violating the Emoluments Clause of the Constitution his entire corrupt presidency." And @HeatherBendit wrote, "Thank you, thank you, thank you for publishing this. I simply cannot understand why this isn't one of the Biden Campaign's non-policy talking points. Trump's official portrait should portray him with his hand in the White House Cookie Jar."

@CobraMantis posted, "I like presidents who don't funnel taxpayer money directly into their own pockets." And @simplyadornedal tweeted, "We the people are getting bankrupted by the Trumps."