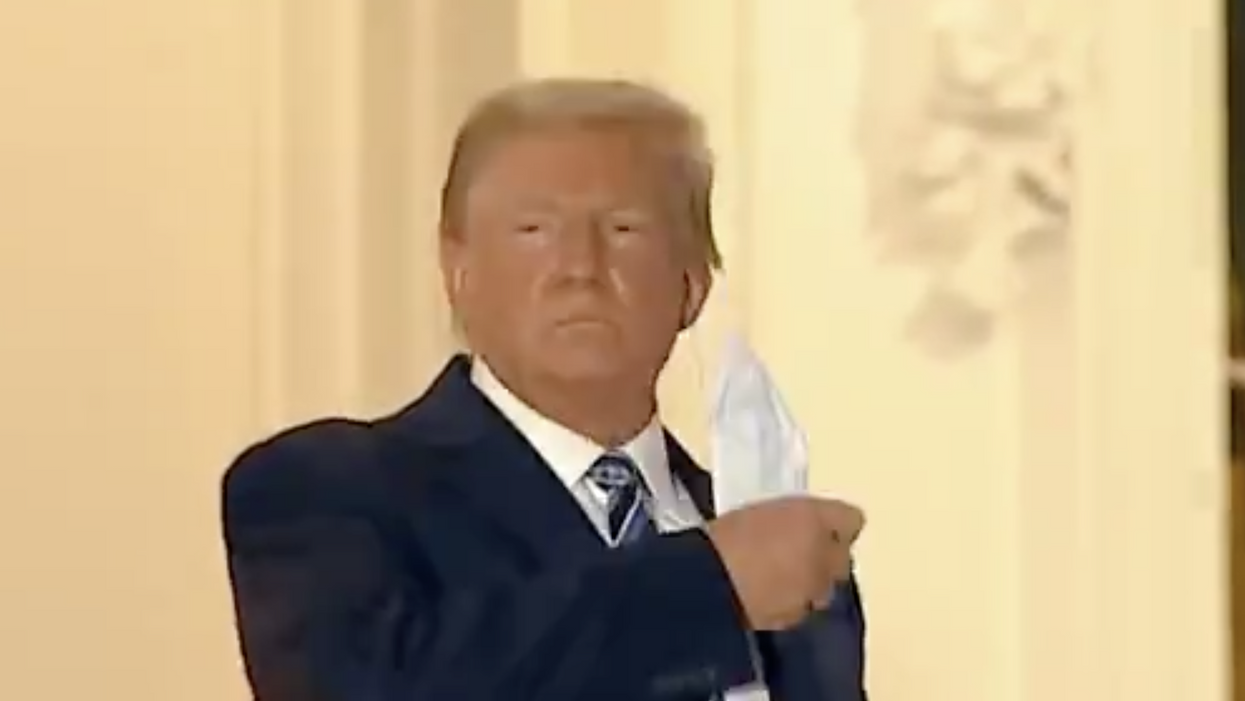 Donald Trump is a man who has no idea what's happening in the real world because he's so desperately committed to his demented version of reality.

To him, spending a mere three days in Walter Reed Medical Center and leaving while he's still highly infectious projects strength. To the vast majority of Americans, it's foolish.

To him, taking a joy ride in his SUV caravan to wave at a dozen or so supporters outside the hospital projected his connection to voters. To the vast majority of Americans, it was positively reckless.

To him, walking up the stairs of the White House to pose on the balcony, rip off his mask, and greet cameras upon his return from Walter Reed was triumphant. To the vast majority of Americans, it was just pathetically selfish as he gasped for air, putting everyone around him at risk.

To him, telling Americans not to let the coronavirus "dominate" their lives was strong. To the vast majority of Americans, it's insane, particularly because they don't have the luxury of having a fully functional medical wing in their house, a helicopter at their disposal, and access to any number of medications, FDA approved or otherwise.

What we appear to be seeing in the early polling is that Trump has taken whatever goodwill he might have gotten from contracting COVID-19 and thoroughly trashed it. Between his epic meltdown at last Tuesday's debate and his truly unfathomable handling of his own COVID diagnosis, rather than becoming more accessible, Trump is becoming further removed from voters—almost otherworldly, and not in a good way.

The CNN/SSRS poll released Tuesday reflected this in the notable movement on who voters trust more to handle the pandemic, with voters choosing Joe Biden by 21 points—a 9-point shift toward Biden since last month's CNN/SSRS poll.

There's also evidence of a post-diagnosis shift toward Biden in the new SurveyUSA poll released Monday that gave Biden a 10-point lead nationally. When the interviews with voters were broken down into time periods, Biden led by 8 points shortly after the debate (before Trump's positive test became public), but then Biden's lead bumped up to 16 points after Trump was airlifted to Walter Reed. It all averaged out to a 10-point advantage.

The polling outfit writes: "Of likely voters interviewed by SurveyUSA after Trump and Biden debated 09/29/2020 but before Trump had revealed his COVID diagnosis, Biden led Trump by 8 points, 51% to 43%. In the tiny window of time between when Trump acknowledged his illness but before he was hospitalized, Trump closed to within 4 points, Biden 50%, Trump 46. In interviews completed after Trump had been helicoptered to Bethesda, Biden appears to have consolidated support, leading by 16 points among likely voters interviewed most recently, 56% to 40%."

Obviously, this situation is fluid. But watch for more of these trends in the coming polls. What appears to be happening is that Trump—through his complete disconnect from the real world—has convinced the tiny sliver of voters who were still sitting on the fence that he is definitively not the man for the job.